We walked back to Sost the next morning, a 35km hike back along the road we had just come up. We left the heavy bikes and luggage behind since it took so long to carry them over each blockage and we were coming back to them anyway, returning to Sost to get the exit stamps was just a formality at this stage anyway, right?
We left at 6 in the morning and made it back to Sost by 1. Right away we went to go collect the stamps. We met with the official and, probably unsurprisingly we had sort of expected this would happen all along, he said no. No stamp. So we tried to reason (argue?) with him and he pulled the irritating move of walking away as were speaking to him, exasperated by his crony attempting to placate us win empty pleasantries such as “Please, you are our guest” which of course made us all burst out laughing.
Eventually he agreed to let us talk to his superior, who when we got through to him was the first person we had dealt with who could listen to reason and could agree that yes, this was a pretty extraordinary circumstance. The main problem was that the China wants all people crossing the land border from Pakistan to be on government run busses – and would have had no problem complying with that rule, only the government run buses weren’t running on account of the terrible landslides that were blocking the roads.
Pakistan maintained that they couldn’t give us the stamp because we weren’t in the bus and we couldn’t get past checkpoint Dihh without the stamp. We were hoping that they would give us the stamp or let us go past the checkpoint, either or, so that we could make it to the border where we would be China’s problem (we had heard from tourers in the past that the Chinese authorities were more pragmatic in terms of following this ride the bus rule and that in certain extraordinary circumstances, which we liked to fancy our current situation was, they would let cyclist cross the border independently).
In the end the immigration official we were talking to came up with an elegant solution: he gave us the number of the Chinese immigration official in charge of the border and told us to call him up, if he said yes we could cycle then we could go.
Richie spoke to the Chinese official on the phone, a man named Liang and was talking to him for a good half an hour. It seemed like he had almost convinced this Mr Liang but ultimately the answer was a no. So now what?
So now what? The two options were wait for the road to be cleared or go back to Islamabad and fly into China. There was currently no work being done to clear he road, not a single man with a shovel, but not wanting to rush the decision we decided to sleep on it.
The next day, flurry of activity – there was bulldozer and it had started to clear the road. Local officials had all turned up in Sost the place was a hive of activity. People were saying the road would be clear in three days, a gross underestimate but a week? Maybe not outside the realm of possibility. So we decided to wait. In the meantime all our stuff was still stuck up the mountain at Dihh.
The following day the dozer was gone. Not great. It had gone further south to clear some other blockages. The road to China remained blocked. In the guesthouse was a Pakistani fellow by the name of Saeed, a friendly guy who worked as a trader and had a small business in Kashgar he was trying to get to. With him we started a small campaign to get the national news to report on the blocked road, the lack of action to clear it and the four poor, trapped foreigners who only wanted some help at the end of the day.
We weren’t allowed to walk back up and collect our stuff, so even if we wanted to leave we couldn’t. We held out hope that Saeeds little media campaign would get something done so we waited another day. Or two, I can’t exactly remember the timeline but you get the gist.
Eventually Saeeds story got picked up by one of the national news organisations and a clip of us he had filmed and sent to them imploring the authorities to do something (lie start clearing the road which still hadn’t resumed) and the next day something seemed to have come of it. For some reason people were saying we were going to be getting a chopper out of here, but we didn’t know why. Eventually we surmised that after the news had aired the piece about us the government had been asked to comment and said that they were sending a chopper to help the four foreigners trapped is Sost. Not outside the realm of possibility, given that all the tourist who had been trapped in Karimabad had been choppered out. 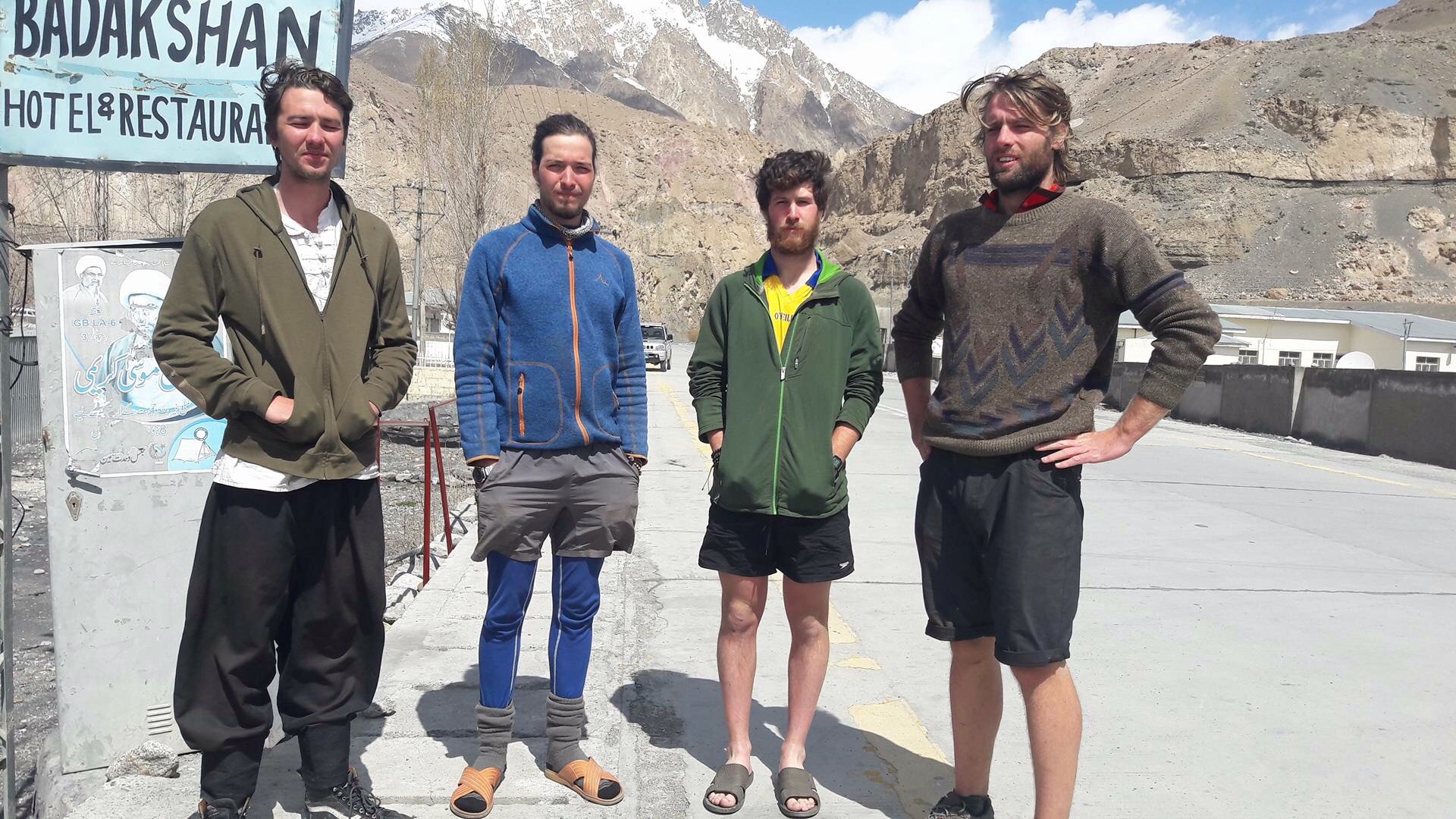 A photo Saeed took of us for his campaign. We look good and pissed off

Well instead of sending a chopper to rescue the foreigners the secret police were sent to intimidate and assault the guy who had brought their attention to the foreigners in the first place. This is what made us finally decided to abandon the whole endeavour and get our asses out of Pakistan on the first plane to China. The road wasn’t clear, wasn’t nearly clear and work wasn’t going to begin anytime soon. We had tried everything short of sneaking to the border, calling up immigration in Pakistan and China. Making our own way up the road despite the blockage, starting a small media campaign, enlisting our embassies – anything we could think of to get something done. We had tried everything we could think of and more and still nothing had happened. There was even a long meeting the same say the secret police showed up with Saeed, his friends, the local magistrate and us wherein everyone spoke together for an hour in Urdu, and at the end when we asked what was happening, if anything had been resolved we were told pretty much no, nothing had happened they had just had a meeting for the sake of it.
After this meeting we got talking to a fellow who had arrived with the local government entourage who had good English. This interaction summed up the entire problem perfectly.

“Why are you not doing anything to clear the road?”

“It is not our responsibility.”

“Why is the army not here to help clear the road?”

“It is not their responsibility.”

“Whose responsibility is it?”

“No ones responsibility.” With a big grin on his face.
So now we just wanted out. All that remained was to rescue our gear from Checkpoint Dihh. We implored the local magistrate who had shown up for this pointless meeting to help us on this. Finally he called up his superior (because by god no one can take action themselves) who agreed to organise something for us. In the end what they came up with was to send a single pick up truck. A truck was the solution to this problem of all our gear stuck in road inaccessible to autos. We realised right away this wasn’t going to work, the penny dropped for them about three hours later once they had been up to ‘inspect the road’. By then it was too late to organise an alternative apparently.
The next day we went out to find the magistrate to try and organise an alternative means of recovering our gear. We were happy to walk back up and carry it down ourselves but now we were on the governments radar we weren’t allowed to walk on that road as it was ‘too dangerous’ (even though officials had made us walk down it five days before). We eventually found him in town, he seemed surprised to see us. I’m sure nothing would have happened if we hadn’t gone to find him.
The solution they came up with was to have the KSF guards stationed up at checkpoint Dihh to bring our bikes down. We couldn’t trust the guards to pack and load the bikes properly and carry them without at least one of us there. We managed to convince them to let one of us go up with them (they were sending a relief group up to the checkpost so some of the other guards could come to town for a bit).
This is getting a bit long so ill wind it up. We got the bikes back eventually, with all the gear. Two days of bussed got us back to Islamabad where once again we stayed with Frank for a couple of days while we booked flights to China. Richie flew home, his time with us had come to an end. Having him around had been great, it was too bad we didn’t get into China with hime after all but thems the breaks. It was too bad we couldn’t cycle across the Kunjerab pass into China but at least we tried, flying was always a last resort after everything we had to resort to it at last.

One thought on “Stuck in Sost”