The snow stopped and it remained overcast for the morning. Finn woke up feeling the effects of the altitude, finding it difficult to focus his sight properly. The man in the shop opposite which we camped sold him a sheaf of tablets that seemed to cure the problem and so we got underway.
We had camped before a pass so a decent chunk of the morning was spent getting over that. As we approached the top so,e bad weather blew in bringing with it snow and hail, reminding us that we were cycling now at 4800m at the top. 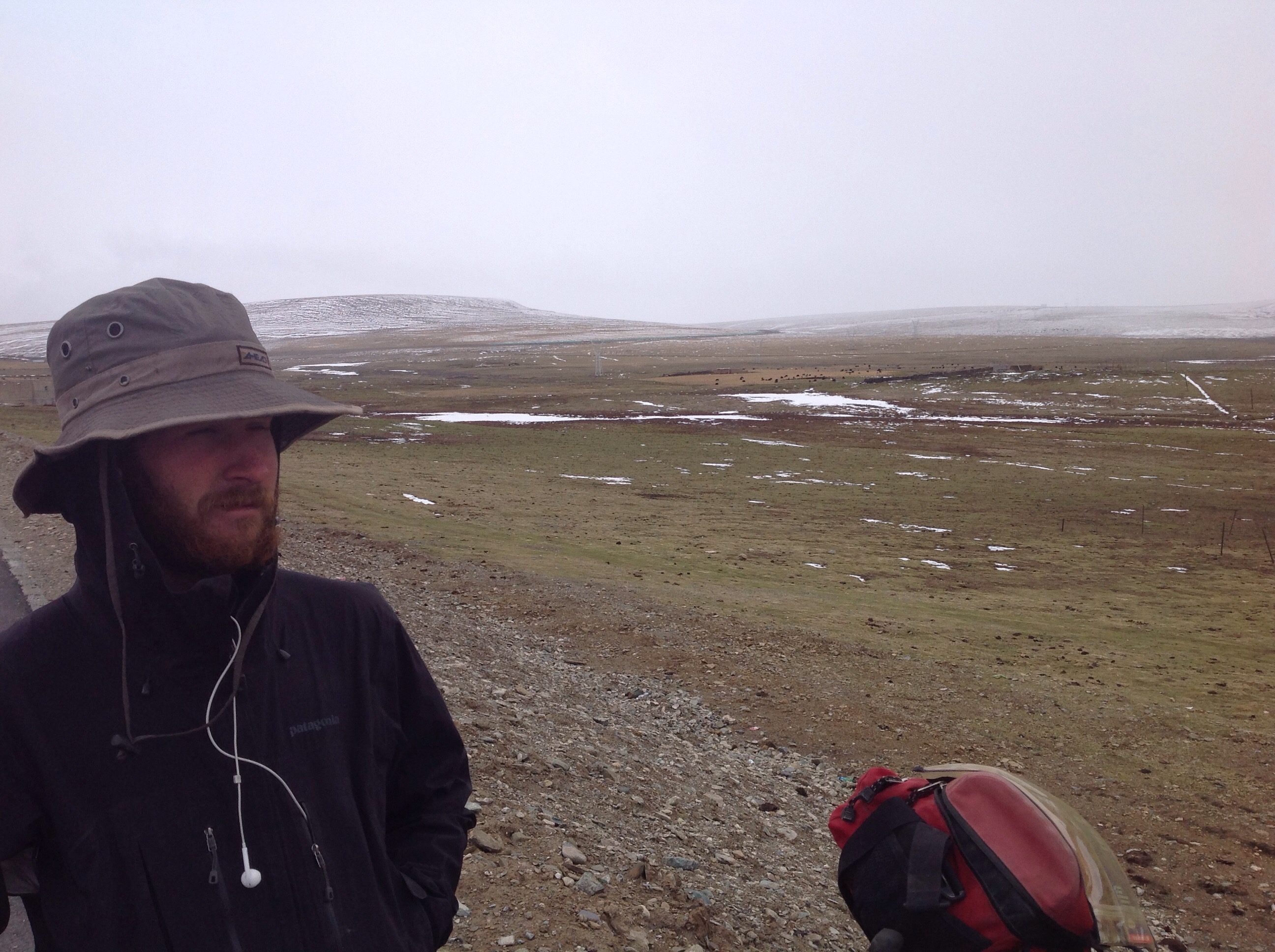 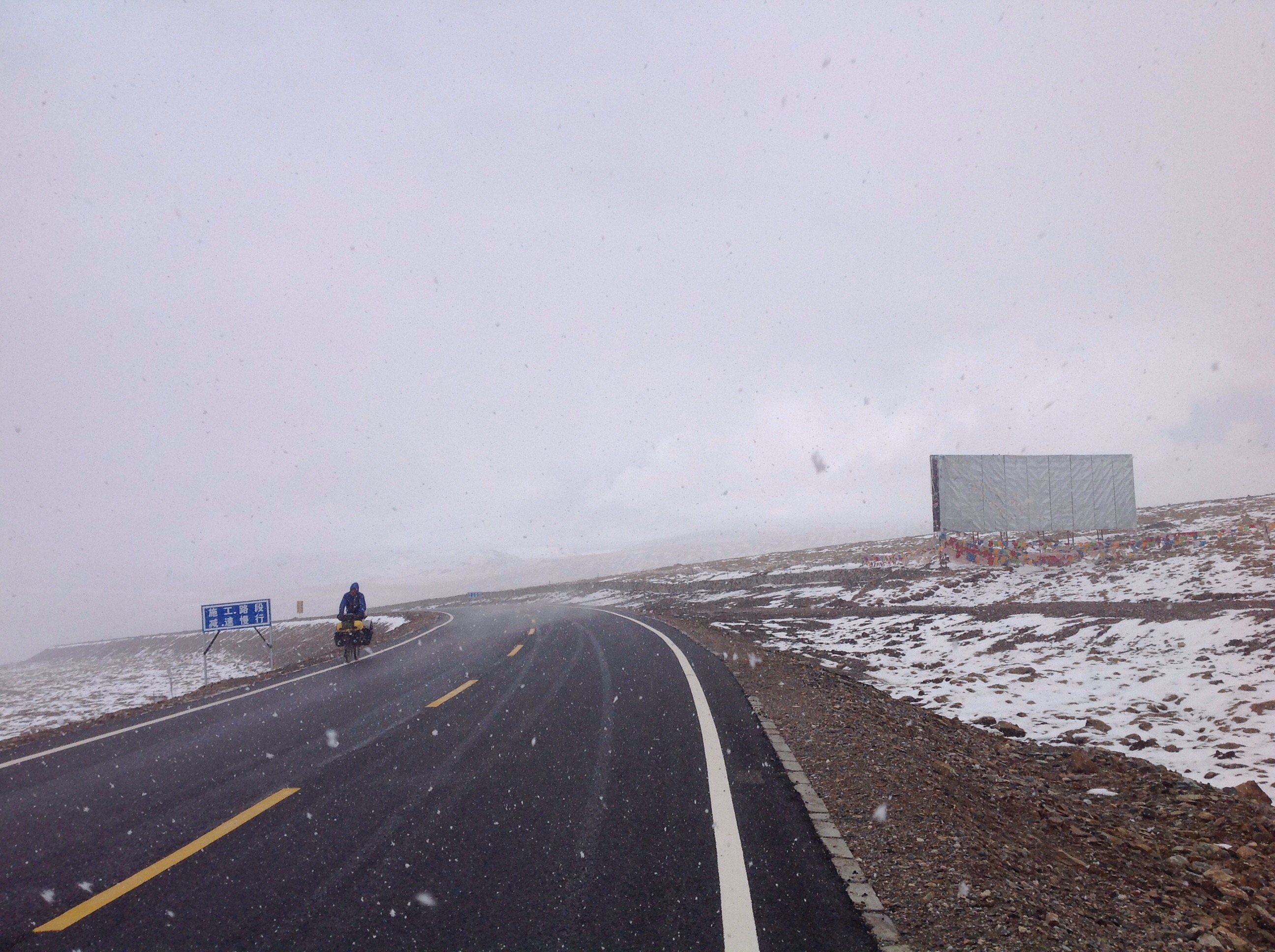 getting over a pass in snow is all the more rewarding

On the descent we ran into another bike tourer coming the opposite direction. This was Alex, an American guy who had begun cycling from Bangkok. He was still new to bike touring had a bunch of questions for us. We spent over an hour talking beside the road, handing out tips about the road ahead. He informed us that there was a small town at the bottom of this descent where we could get lunch. It’d had been a long time since we’d met an English speaking bike tourer on the road (let alone a native English speaker at all) and Alex likewise so we indulged in conversation.
As we said our goodbye I felt a bit bad for Alex, he had been complaining of riding into a headwind for the last 600km and he would have to put up with it at least one more day as the wind was at our backs, pushing down the mountains. We came down from the brown rocky pass and back into the greenery of the grassland between the peaks. 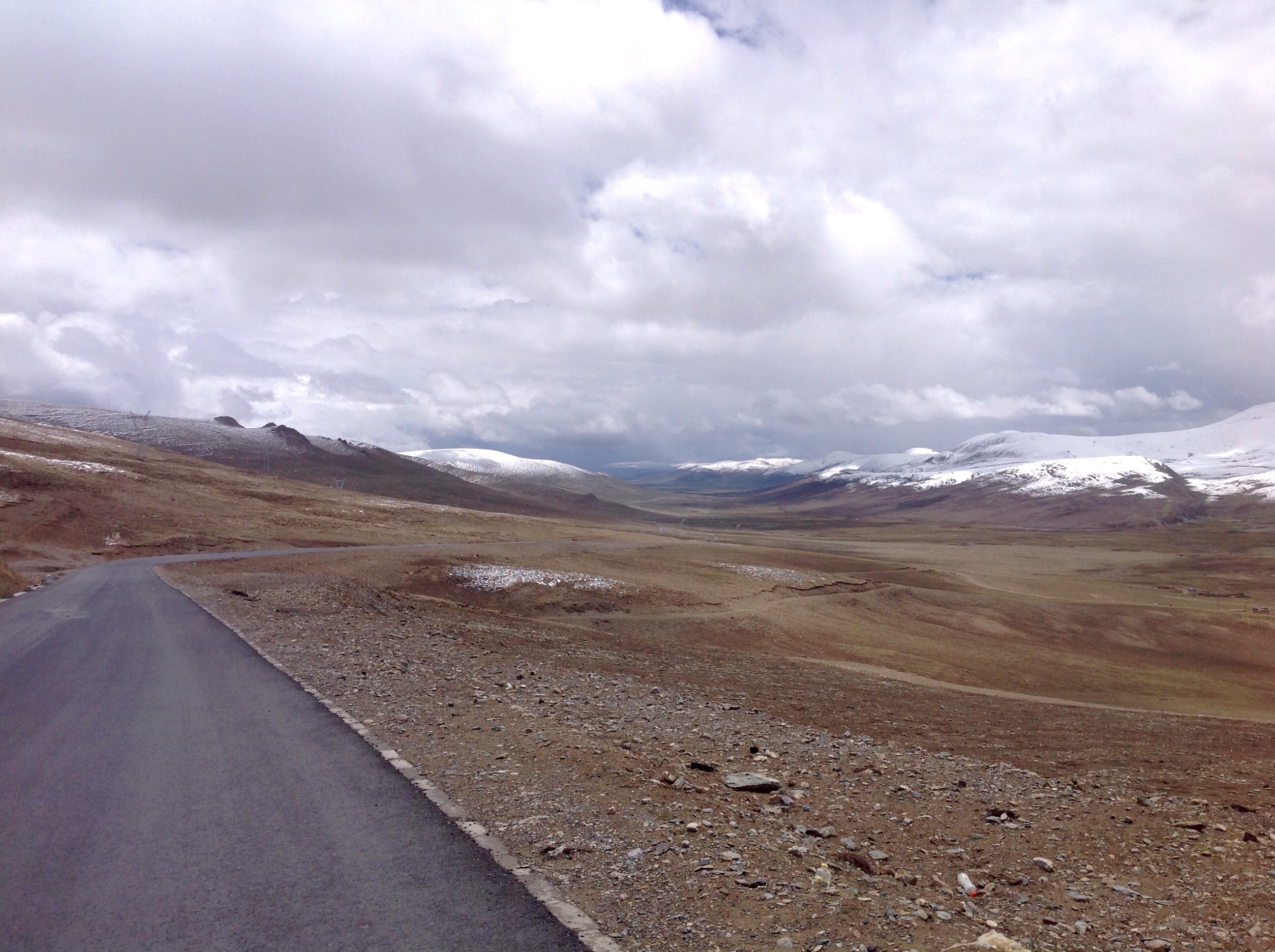 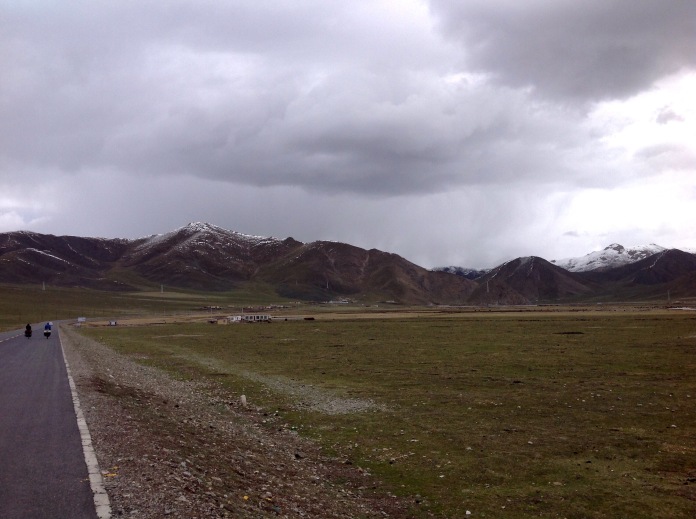 The road joined up with a river now and followed a wide curve up into a nook in the foothills where a town had sprung up. The main street was lined with one story open front shopfronts that mostly seemed to sell auto supplies or perform auto repair but at the edge of town we found a noodle place to get some food.
Alex had provided us with a valuable piece of information: that the last pass before Yushu that we had yet to climb could be avoided by taking the newly constructed tunnel. The tunnel wasn’t open to traffic yet but was finished and functional, he had come through the tunnel himself on the way up. With this in mind we knew we could make it to Yushu tonight, even though it was still about 80km off and now lunchtime. The final 40km were all downhill, all we had to do was get to the tunnel.
The lunchtime ride had us following the length of this picturesque valley under a now clear blue sky through the grassland. Small huts and monasteries sprang up along the road occasionally. As the road trended upwards we passed another little village of government-built identical houses. On the other side of this village we arrived at the tunnel. 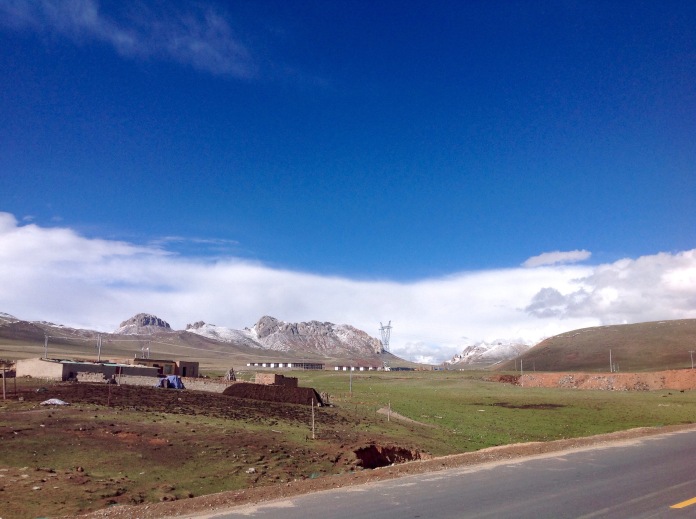 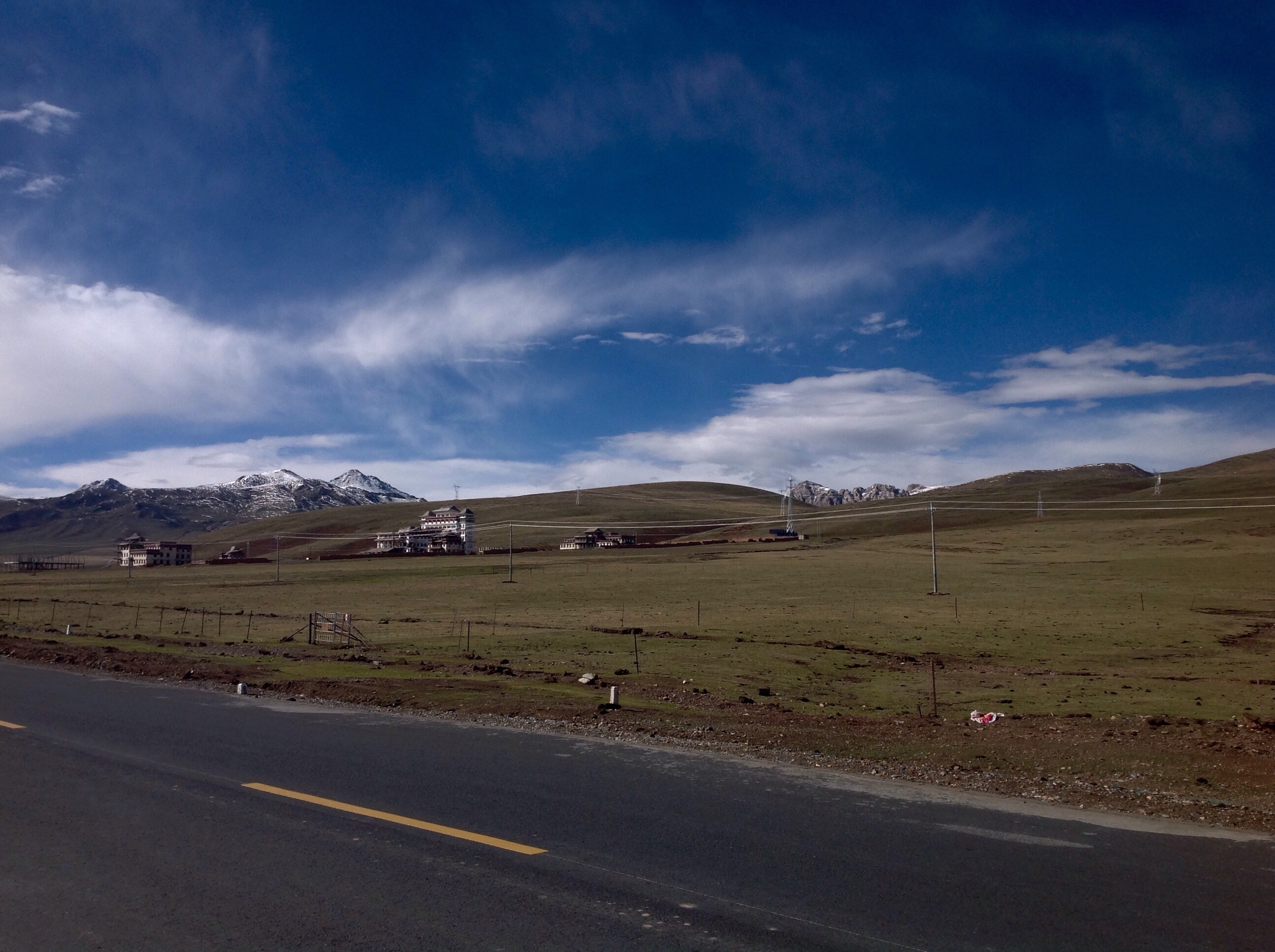 Riding through the tunnel saved as a load of time. On the other side of the mountain the weather was not as clear, but the overcast sky added to the feeling of a complete scenery change as we descended rapidly front the open plateau into a narrow gorge between tall, tough looking grassy hills. We were once again reminded of Ireland, or probably more apt Scotland as I don’t think we have peaks near this high back home. Unfortunately I was enjoying the descent so much I forgot to stop and take photos. 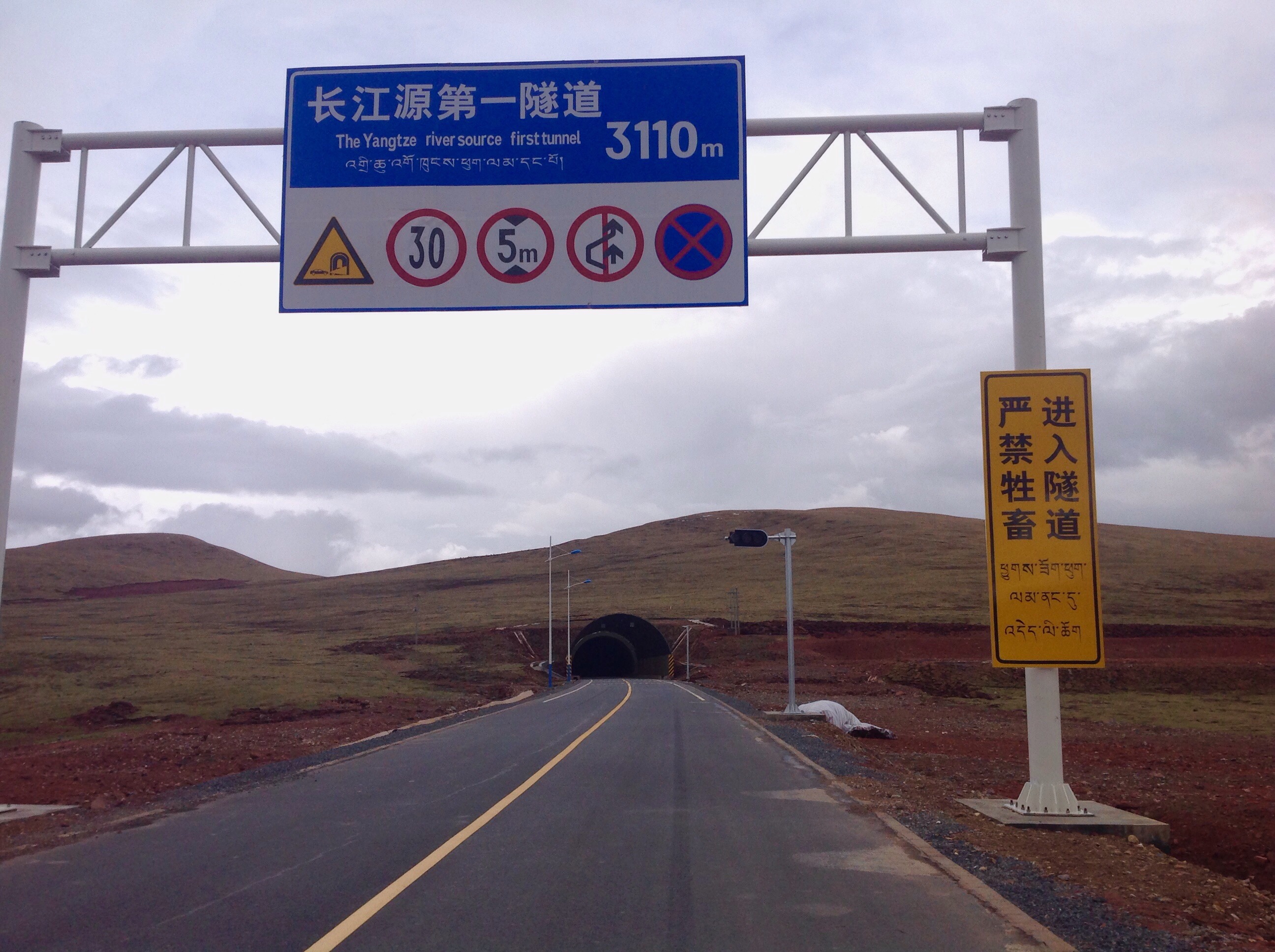 We pretty much descended right into the city of Yushu. We arrived in under the fading evening light in a misty drizzle, in some ways my favourite time of day and weather in which to enter a city. We pulled up at a cheap but satisfactory business hotel and had our first warm showers in