In the morning the farm owner returned bright and early to take us back to his house for breakfast. We took down camp as fast as we could and followed him back to his village, about 800 m down the road.
His place was really nice, he lived with his elderly father and possibly mother nut we didn’t see her. We were served a breakfast of eggs and lentil curry and fresh yogurt. After we said hello to all his friends in the village who naturally wanted to see the foreigners passing by.

bikes getting the customary inspection at breakfast

We left the village at 10 which wasn’t as late as it could have been, it’s quite easy to get held up for a long time speaking to everyone. We had at last left the main road behind and found riding on this side road much better. The quality might not have been as good, at some points it was really just a collection of stones and holes, but the scenery we got to ride through and the amount of traffic was much more enjoyable than what we had seen before.

We were right in amongst the farmland now, with fields stretching right up touted narrow road. Even though this wasn’t the main road it was still pretty busy, we passed through a lot of towns and there was still traffic but now off tractors and motorcycles, very few cars and trucks.

ice cream bike, wonder if you could tour on one of those? 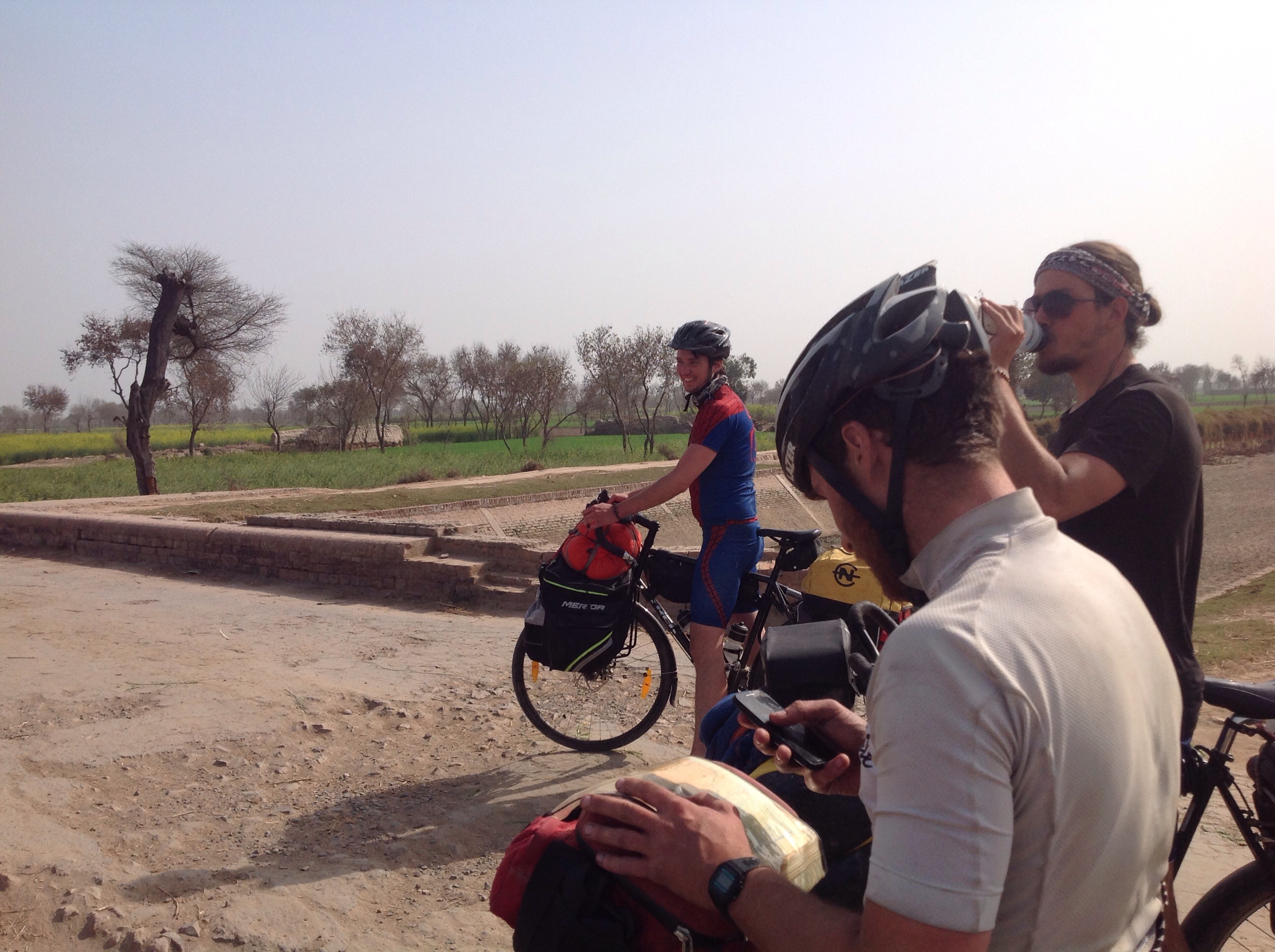 crossing a bridge not far from Bam Abala 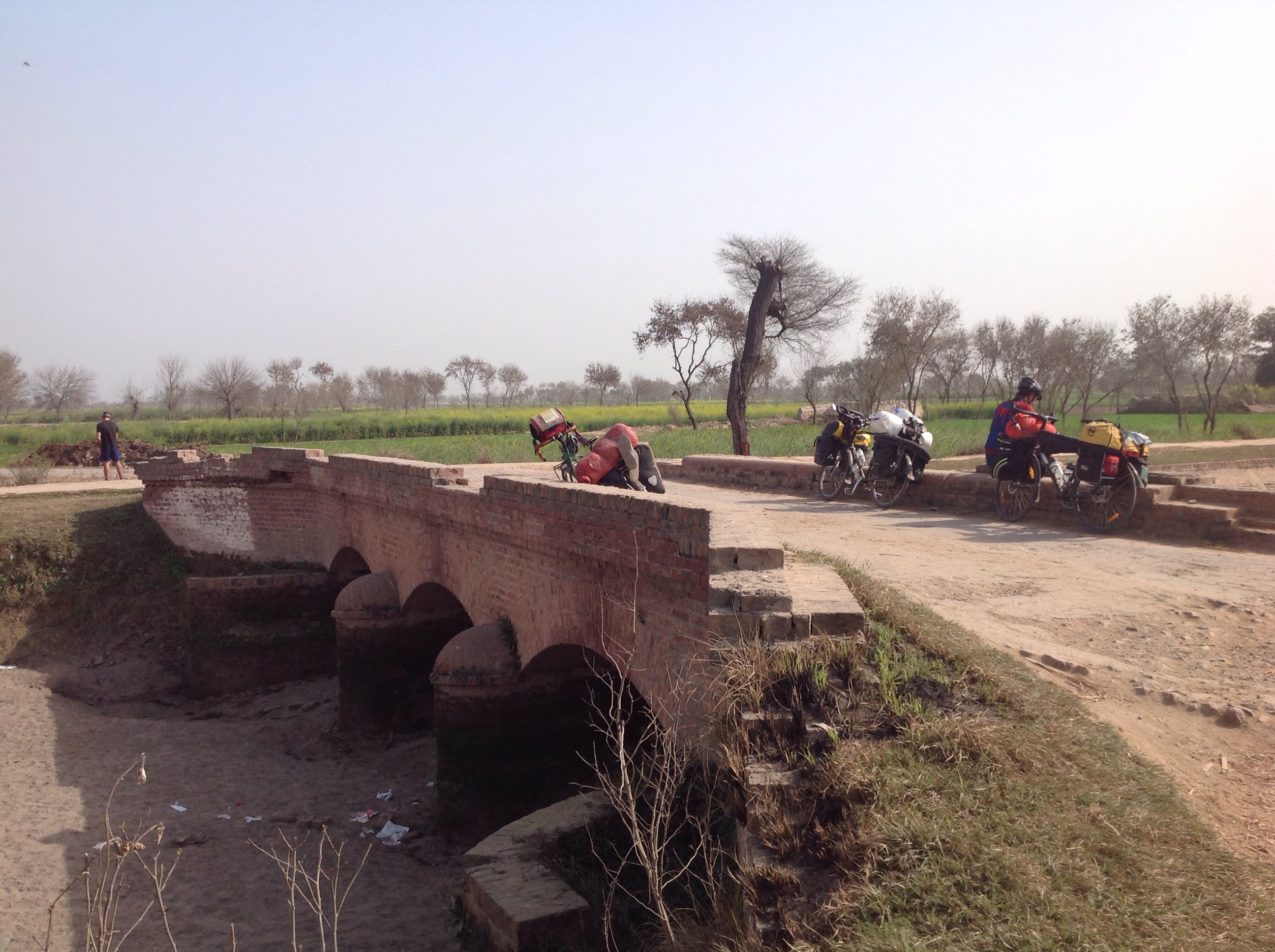 So it really felt now that we were cycling in Pakistan and not simply though it. In the early afternoon we passed through another village and out the other side in a clear field next to the road was a big group of people all watching a drum performance. We decided to stop and take a look and right away a man came up and spoke to us. He asked, do you want to see the drumming? Sure we said, and led us through the circle of people where we were the cause of more attention than the drummers themselves.
We had a crew of children following us around within the circle as we moved from one side to the other. ‘They are happy to see you’ explained the guide ‘they have never seen westerners before’. The drumming was very impressive, four or five guys with a huge drum each slung over their shoulder that they played with their hands. It would start off slow and then every now and the two would face off and start drumming faster and faster until one stopped.
Our new guide was a man named Shahid Lashari. He spoke great English and had worked for a time as a taxi driver in Dubai. Now he was back in Pakistan where he owned a few petrol stations and a guava orchard that he took us too after the drumming.
Shahid offered for us to stay with him and his family back in the village we passed through, a place called Bam Abala. Since we had refused such an offer yesterday we wanted to accept today, so we agreed and he led us back into Bam Abala.
When Shaid was talking about his family we presumed he meant with his immediate family. What he was referring to as Family was the whole Lashari clan, the extended family of uncles and cousins that made up about 60% of the entire village. Shahid took us to his cousins Amar’s place. Amar was a brilliantly friendly character with a broad smiling face and large moustache. He had a passable grasp of English but his laugh and smile were more than enough to communicate how pleased he was to have us.
Amar’s place was big, another compound of a house with the place all centred around a courtyard. We spent most of the evening meeting a seemingly endless stream of uncles and cousins who came to say hi to us.
After meeting everyone Amar cooked us a brilliant barbecue dinner of fish and Chicken Masala along with fresh Naan and rice. It was of course delicious and Amar seemed to revel in pilling more and more food on our plates until we couldn’t eat another bite.

eating with the Lasharis. Shahid on the left in the brown, Amar at the back with his son Mehrooz and Shahids mysterious friend Habib on the right in the black.

Shahid and Amar then invites us to stay another day, so that tomorrow we could look around the village, see some of its attraction (they apparently had a dancing horse) and, of course, have another barbecue with Amar. That sealed the deal so we accepted, we would spend another day in Bam Abala.