This was one of those days I didn’t take many photos, sorry!

Not much to say about today’s cycling. It was much the same as yesterday with us riding mostly through countryside that was full of farmland along the main road to Lahore. Later today we were going to turn off the main road onto a quiter side road we had spotted on the map, but that was 60 km away yet.
We still garnered the same attention from passers by in the road as before. The novelty was starting to wear a bit thin, and there’s only so many ways you can answer the same questions over and over. I have to say that a surprising amount of people knew about Ireland, compared especially to Iran before. Most people knew us from that time we beat Pakistan in cricket, which I vaguely remember but which most people here seem to have an encyclopaedic knowledge of.
We got to Sahiwal, the town we would be turning off the main road at and continuing along to Lahore on a smaller, hopefully quieter road. We missed the turn off initially but that brought us to something amazing: the first McDonalds we had seen in two months! We all ran in to get McFlurrys. Here, it seemed like McDs was an upscale restaurant for the locals to visit, judging by the fancy cars and well dressed patrons.
We doubled back and soon found the right road out of Sahiwal. Sahiwal, like all settlements be it a village or a town or a city in this case was exploding with people everywhere, driving on the road on motorcycles or donkey carts or in one case camel carts. I know the population of Pakistan is big but I’ve never seen so many people so consistently at every settlement we pass through.
We rode for a while out of Sahiwal and as it got dark once again pulled off the road to find somewhere to camp. We ended up behind a haystack off the road where we thought no one could see us. 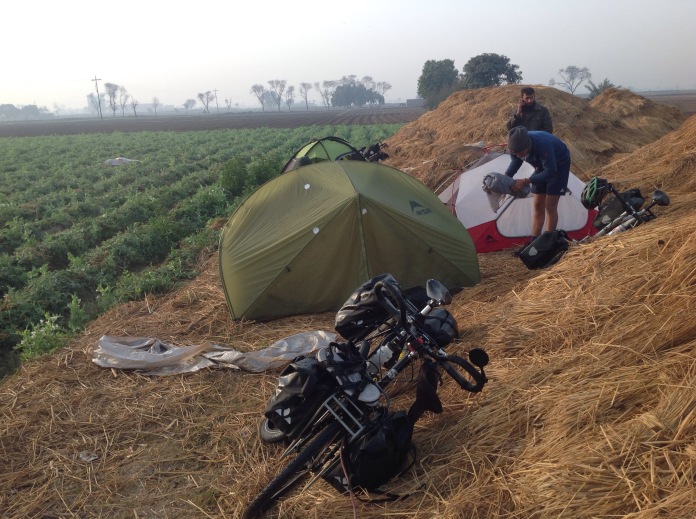 As it turned out we could be seen, by the guy whose haystack it was no less. He was happy to let us camp there and even gave us some potatoes to cook that he stored in the hay. He left for a bit and we had our tents and everything set up when he returned with some friends who spoke English. They explained that he was offering us to sleep in his house. If we had known early we probably would have accepted, but now it was dark and we were all set up so we politely refused. We offered to visit him in the morning.