Camp was only 20 kilometres from the city of Qom, but we weren’t going to pass through it. Almost everyone we had talked to so far in Iran, tourists or locals, had told us not to bother visiting Qom. It’s a religious city, it has some famous shrine and most of the population and visitors are apparently pretty staunchly Muslim. 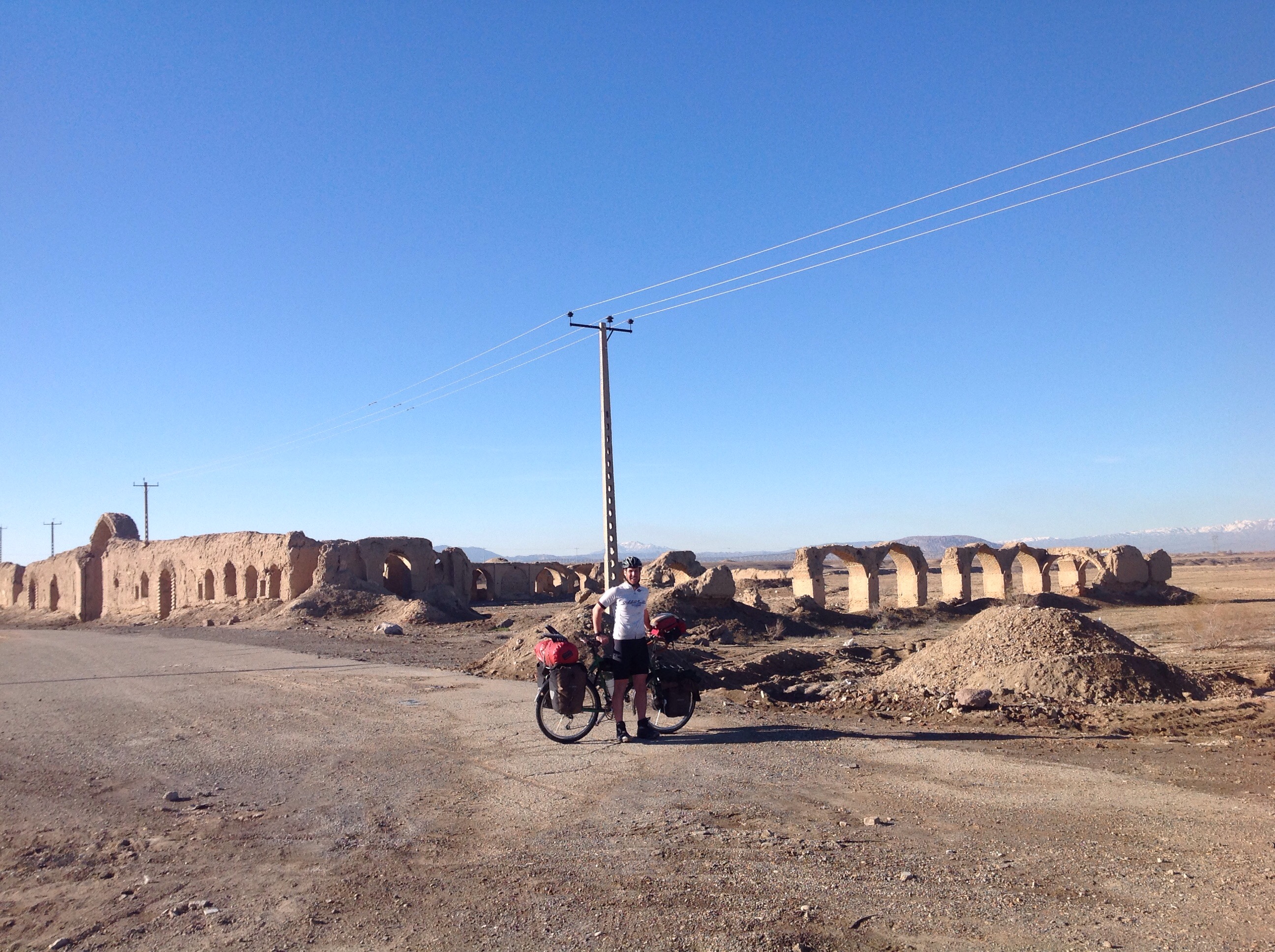 the ruins were near camp this morning

So we rode through the desert in the cool of the morning and took the ring road around Qom. A bit of a ruckus was kicked up riding past a couple of roundabouts and roads close to the city where people were just sort of hanging out. They’d see us ride by and someone would notice and shout ‘hello mister’ and soon everyone would be involved, whooping and hollering. It was kind of endearing really.
Outside of Qom some serious effort had been made to cultivate the arid countryside. Small irrigation channels provided a smattering of moisture in the fields and here and there patches of green broke up the sea of brown. 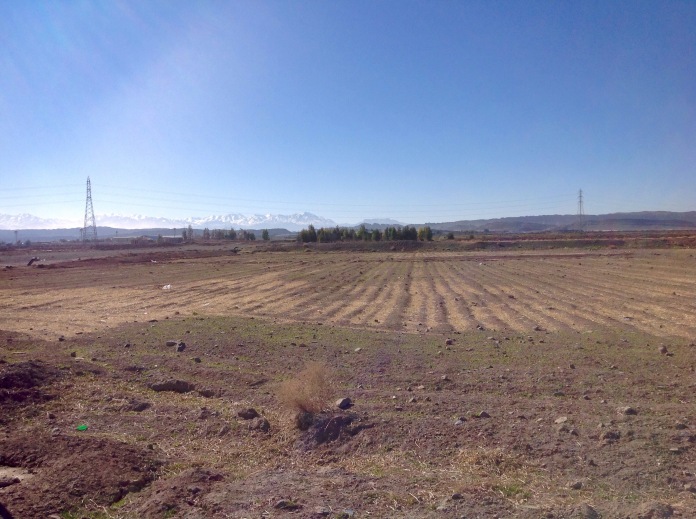 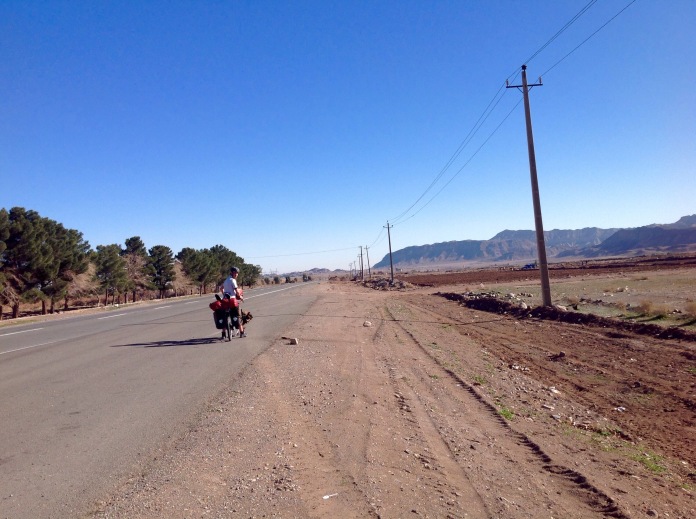 Lunch we found a nice place in a little oasis by the road. And then more desert riding for an hour or two. 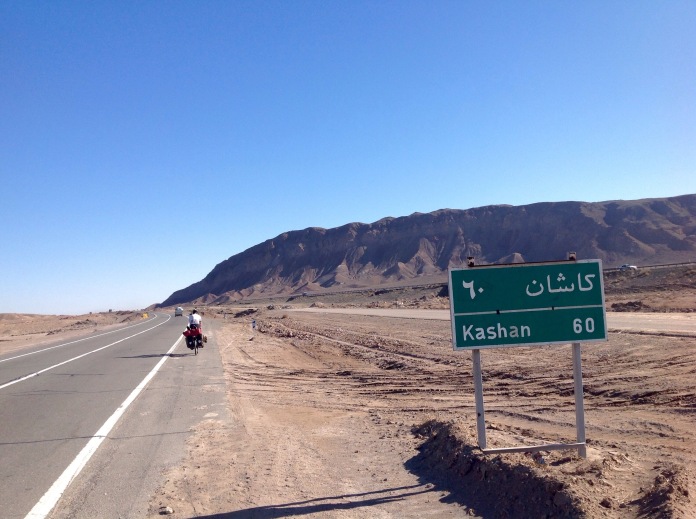 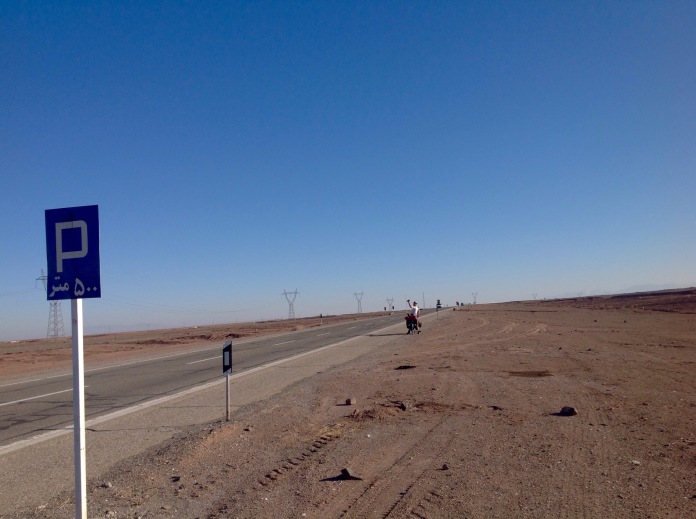 Around half four we arrived at the town of Mobarak Abad which sort of gradually emerged out of the dust. We stopped at a junction to pull on our trousers (we can get away with shorts on the bike but need to cover up our legs walking around lest someone get offended) and while doing so a guy came out of a small walled off garden nearby and walked over to us. He invited us into his garden and said we could crash out there for the night in one of the old houses.
Well never the type to look a gift horse in the mouth we thanked him and agreed. His name was Mustafa and he was turning this old farm/garden grounds into a campsite for tourists. Work was just getting going it seemed but he’s a smart guy to get out in front of what I imagine will be pretty big tourist boom in Iran over the next few years.
We talked with Mustafa for a while and then he went home to his house in Qom. We unwound in the old house for a bit and then hit the hay, ready to ride the last few kilometres into Kashan the next morning.