Since arriving in Istanbul marked for us the end of our European leg of the trip we had decided to spend one whole week there. A whole week not cycling seemed a bit crazy and in fact after only a couple of days off the bikes it started to feel like we’d never cycled at all! But the break was much appreciated. 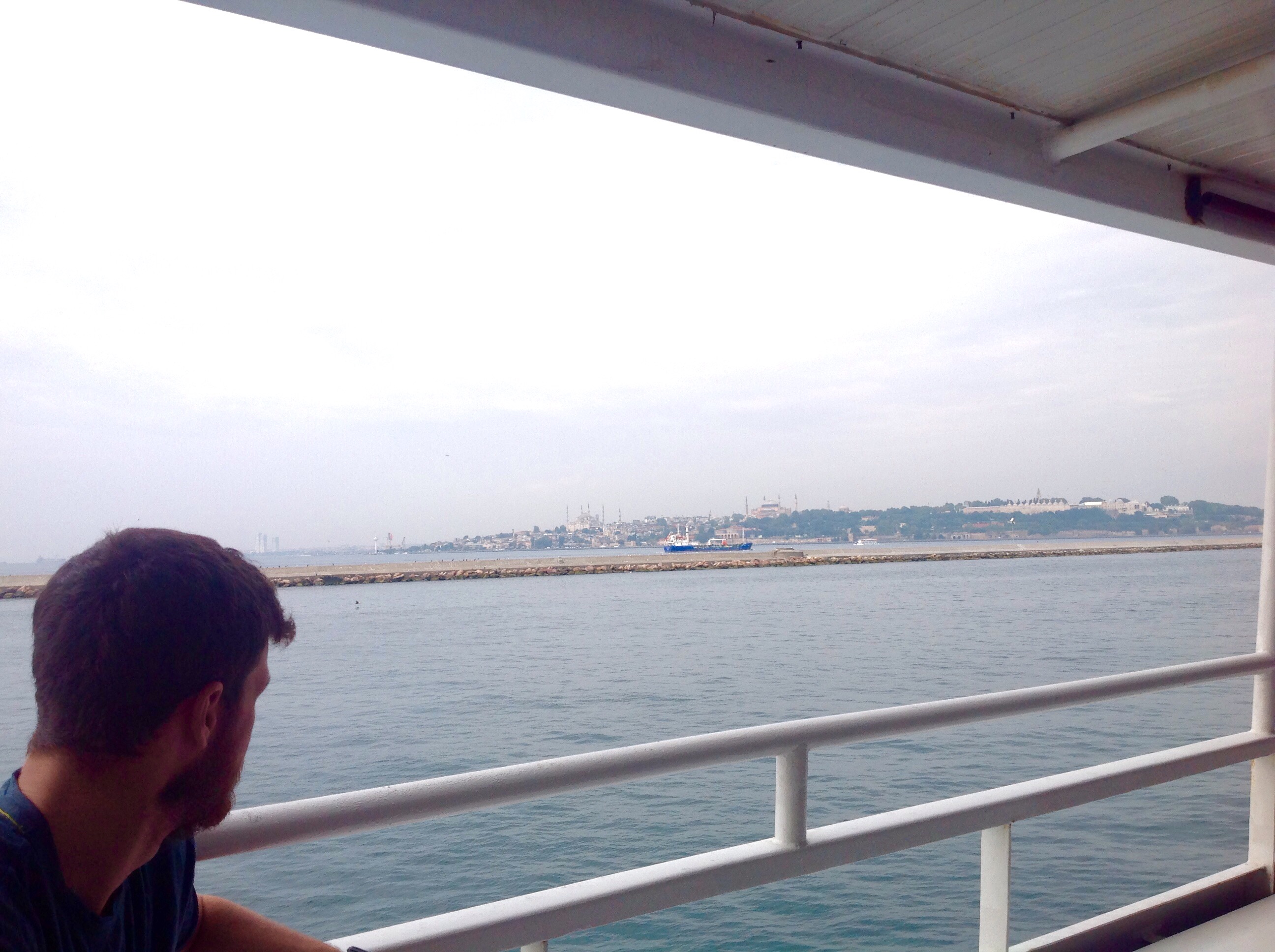 taking the boat back to the European side to the historic peninsula. the palace is on the right, the Aya Sofia the mosque in the center

The night we arrived in Ozgurs he was having some of his friends over. They were all out on his balcony playing Turkish folk songs and we were able to just sit back and relax, just the ticket after the hectic cycle into the city.
We had promised ourselves long ago that when we got into Istanbul we were going to go for a Hammam, a Turkish bath. A quick bit of research (browsing the requisite section of the Lonely Planet) revealed that one of the best was to be found back in the Sultanamate, right near the Aya Sofia. Next day we took the boat back over to the European side and made an appointment for one of their more luxurious bath options.
But before that, we met up with Josh and Abey and Josh’s mum for lunch. It was nice seeing them one last time, and kind of funny, thinking about how their trips were over and we were barely half way. Once lunch was over we said our last goodbyes and went for the Hammam.
Opting for the higher end bath was one of the better decisions we’ve made. It was definitely appreciated all the more having cycled the whole way. The building was a 500 year old Ottoman bath house that had been restored and reopened in 2012. It was like something out of Arabian nights, big domes and marble floors and opulent couches and cushions. The bath itself was a bit odd at first, but once you got over being washed by another (hairy Turkish) man it was fantastic. After changing we were each handed a tasseled, purple wrap to cover up during the bath and then led into another domed, marble floor room with a big slab in the centre and little alcoves out to each side where boiling hot water poured from gold taps.

i got these shots from their site, this is the entrance and changing area 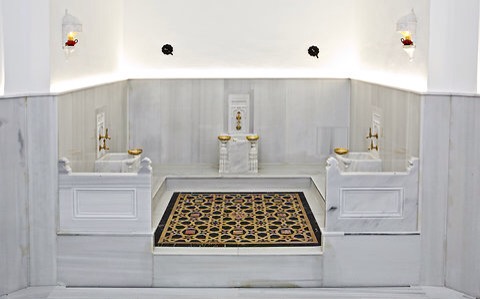 one of the washing alcoves

Here we were told to wash (and that we should leave the purple wraps on). When we felt sufficiently clean we walked back out to the domed area and said hello to two other guys also bathing. Turns out these were the dudes who were going to wash us. First, a vigorous scrub with a rough exfoliating glove – after washing in rivers with a flannel for the last few months this was probably necessary. Then a soap soak, which was where you lay face down on the big marble slab in the middle of the room and get cover head to toe in warm suds and the massaged.

the main bathing area, with the marble slab om the middle

After all this washing was done we were taken back into the main hall and wrapped up in towels and shown to a futon to rest on. The two guys fed us this great line on the walk out of te bathing area: “today, you are Sultan”.After this little break it was time for a final massage (focus on the legs!) before the whole things was over. It took about an hour and is probably the best way to feel rejuvenated after cycling across a continent.
We did go see a lot of the sights during our stay, but I never really like writing about visiting famous landmarks, there’s not a whole lot to say really.

Aya Sofia is big and cool if you like history and probably worth a visit even if you don’t. It’s a bit price to get in (30 Turkish Lire, about €10) but you’re not going to go to Istanbul and not see the Aya Sofia. 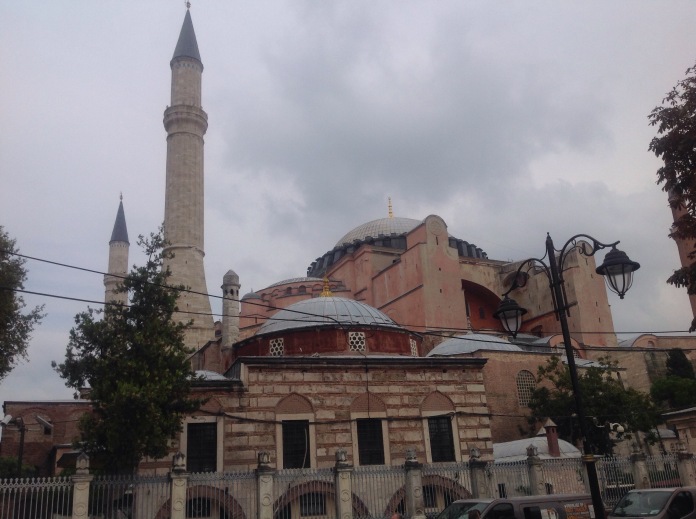 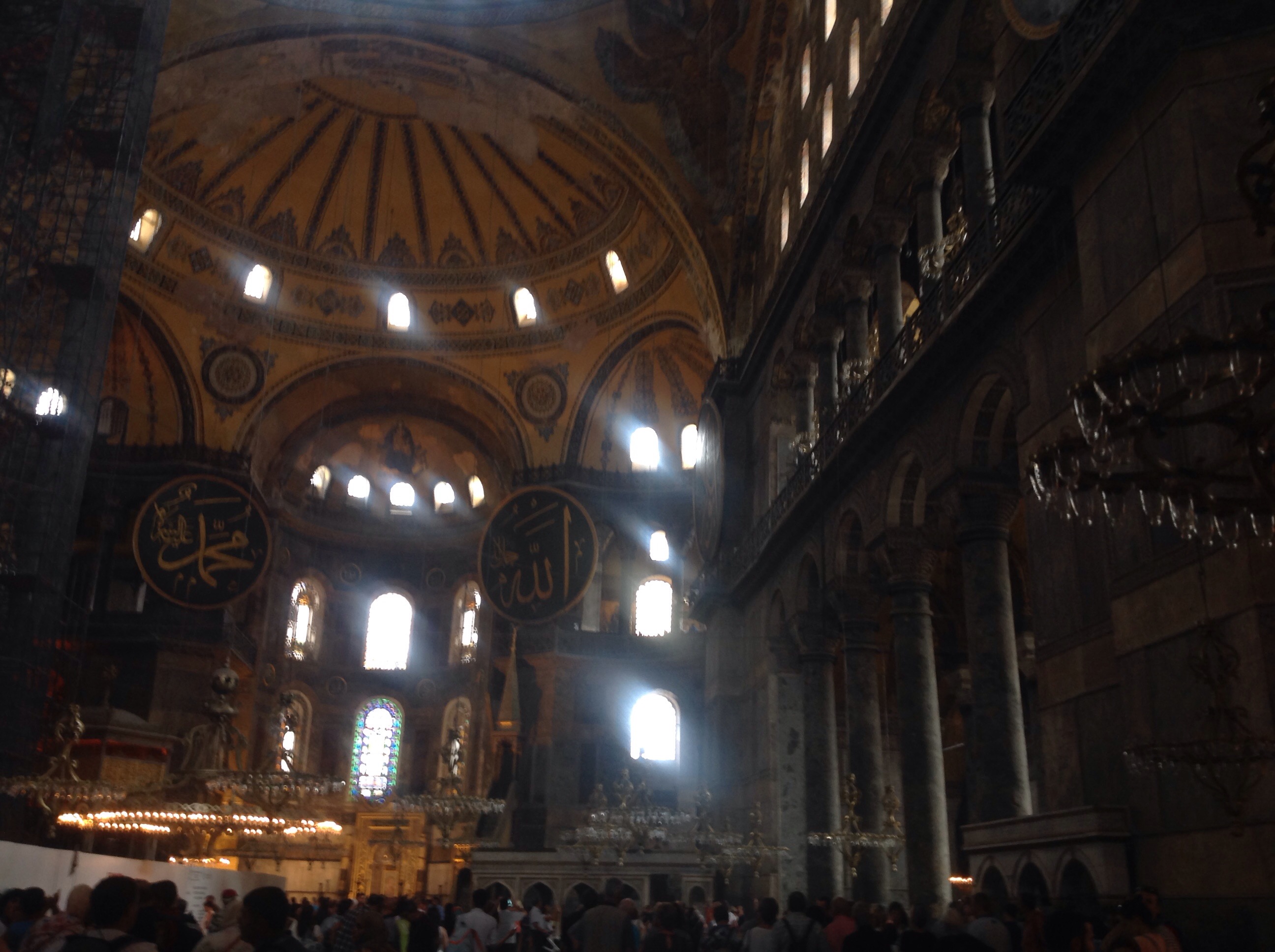 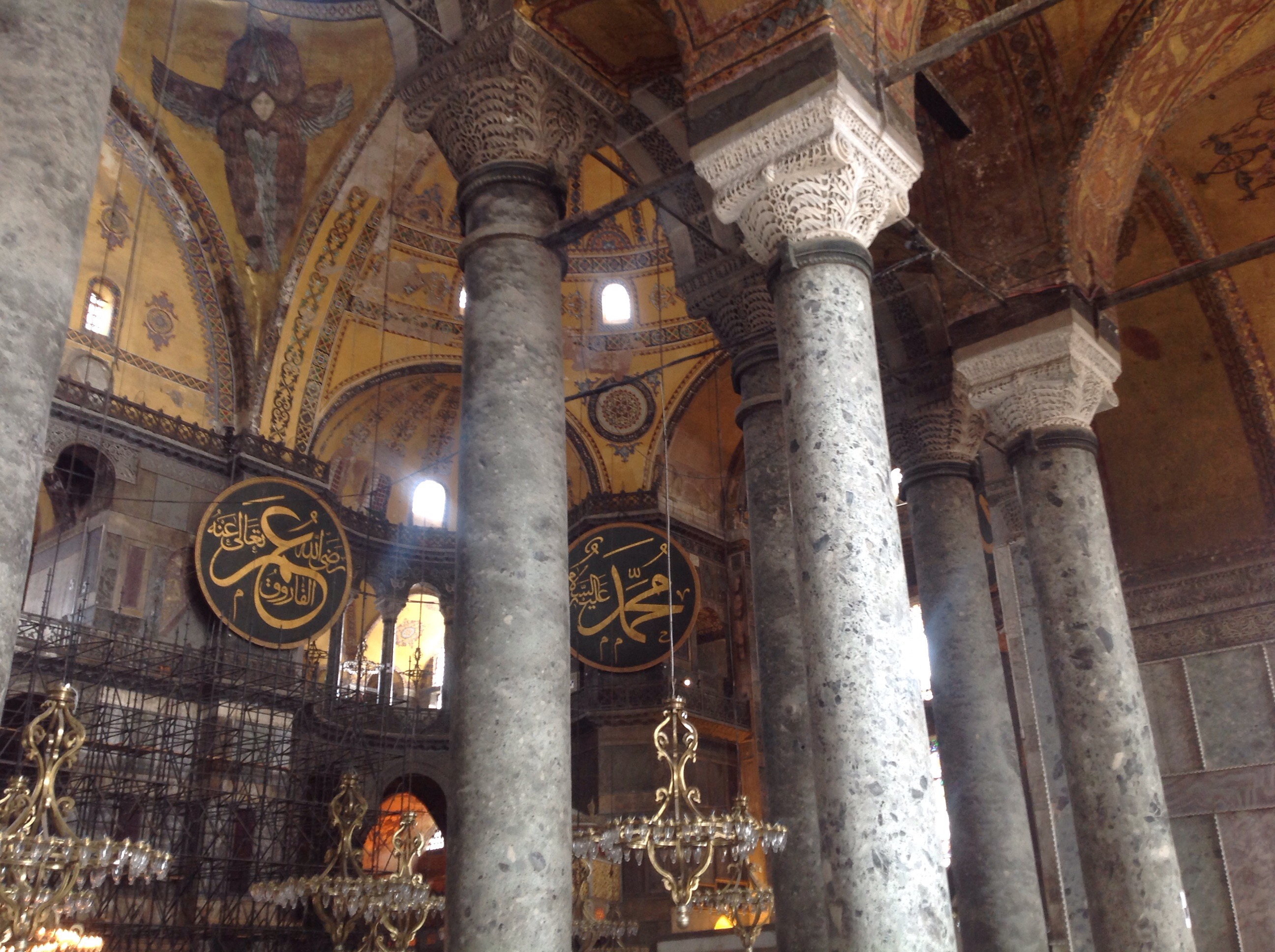 The Blue Mosque is nice, but it was close to closing when I went and totally packed, it felt like a zoo. Lots of impressive Islamic decorations inside though. I’d say go early morning. 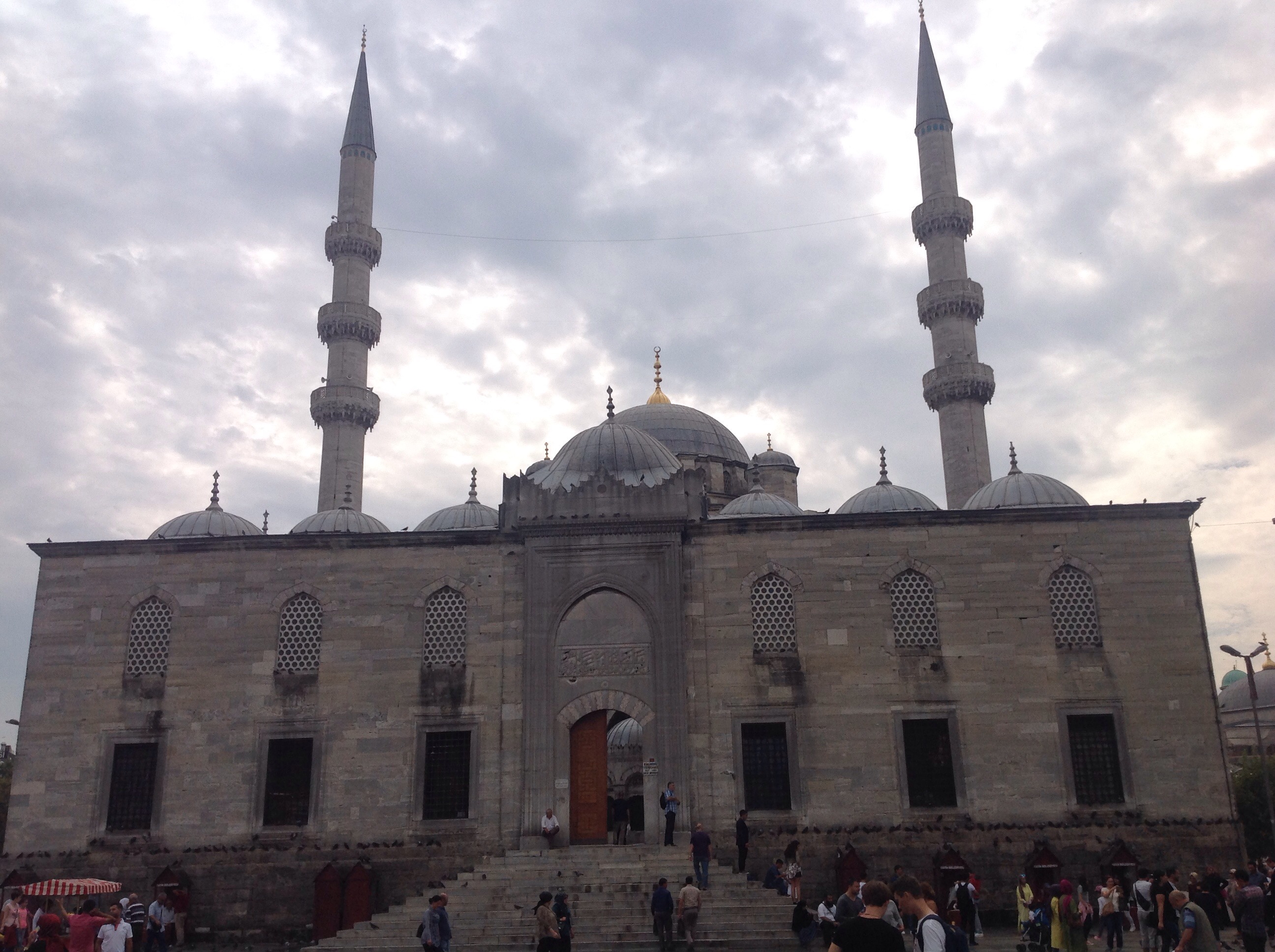 outside the Blue mosque, its called blue because of the interior not the outside 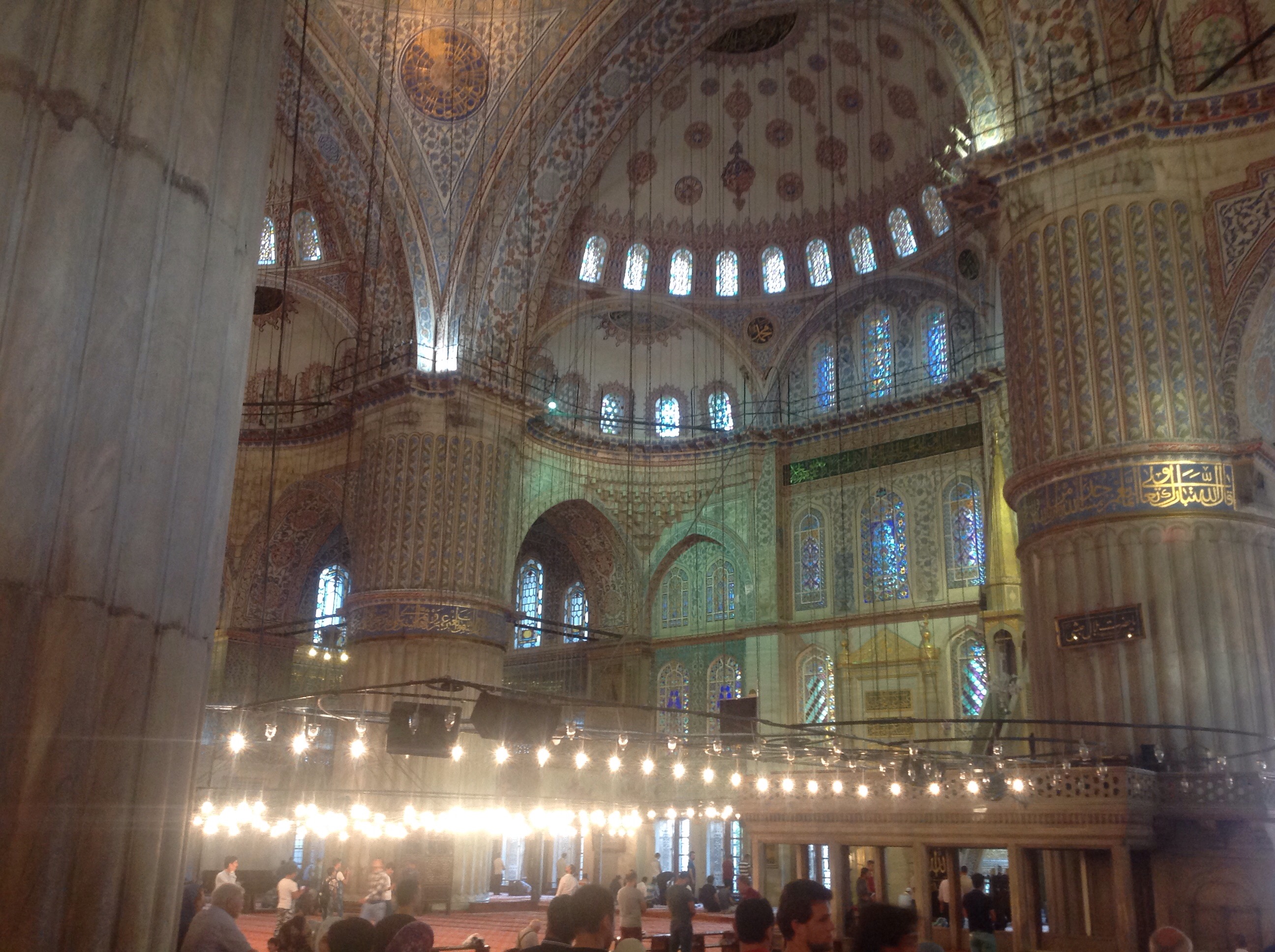 inside with the blue windows, since it is still a functioning mosque only practising Muslims can enter the centre (the area under the lights) 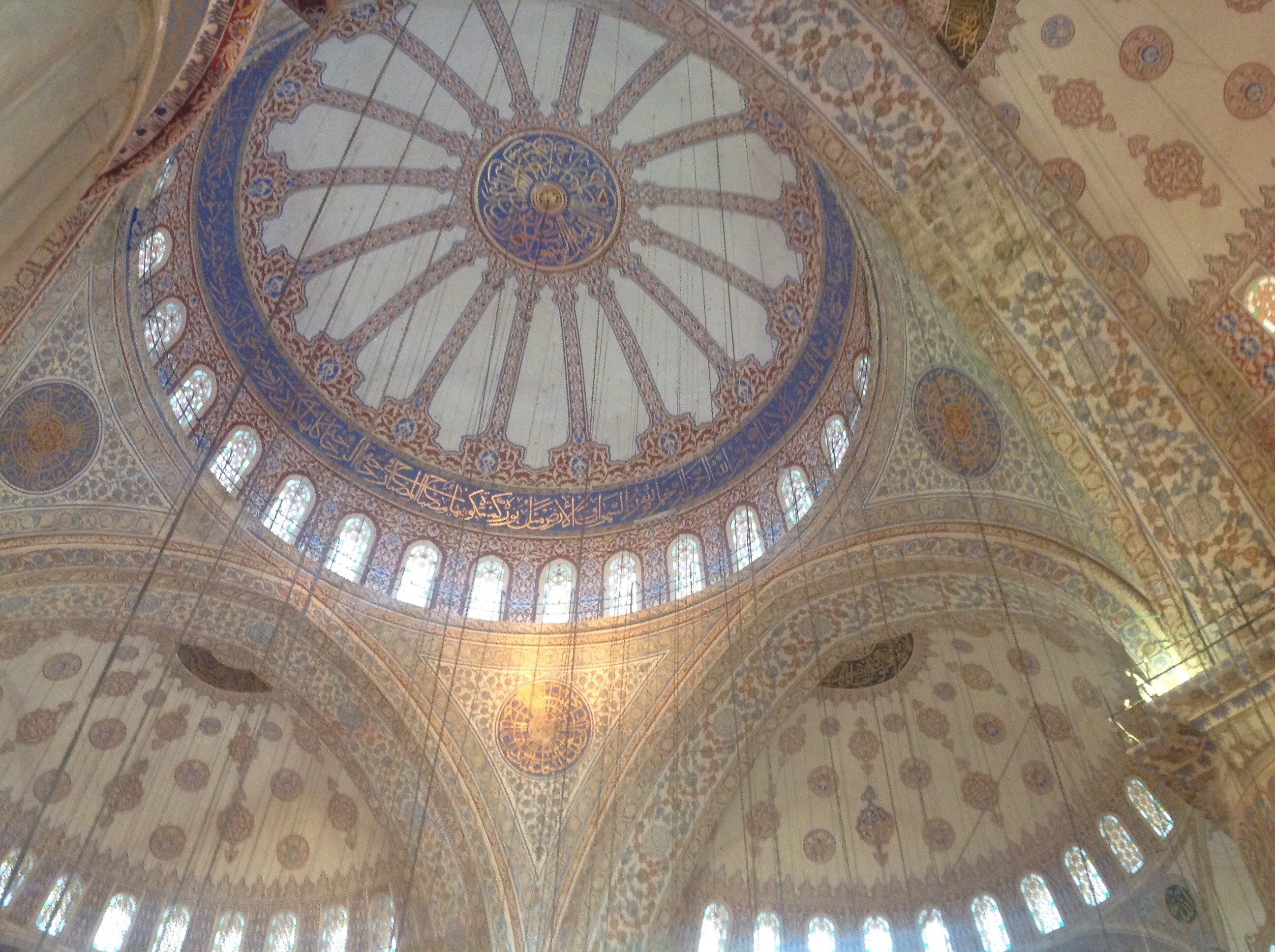 the main dome of the mosque

The Topkapi Palace is a great concentration of Ottoman architecture and the harem shows off just how luxurious the living quarters were for the Sultan and the court, it’s sort of like an oriental Versailles. When we went though it was right in the middle of Bayran, a multi day Muslim holiday and national holiday in Turkey so it was packed out and absolutely roasting too. It would have been nice to stay and wander longer than I could hack the crowds for. 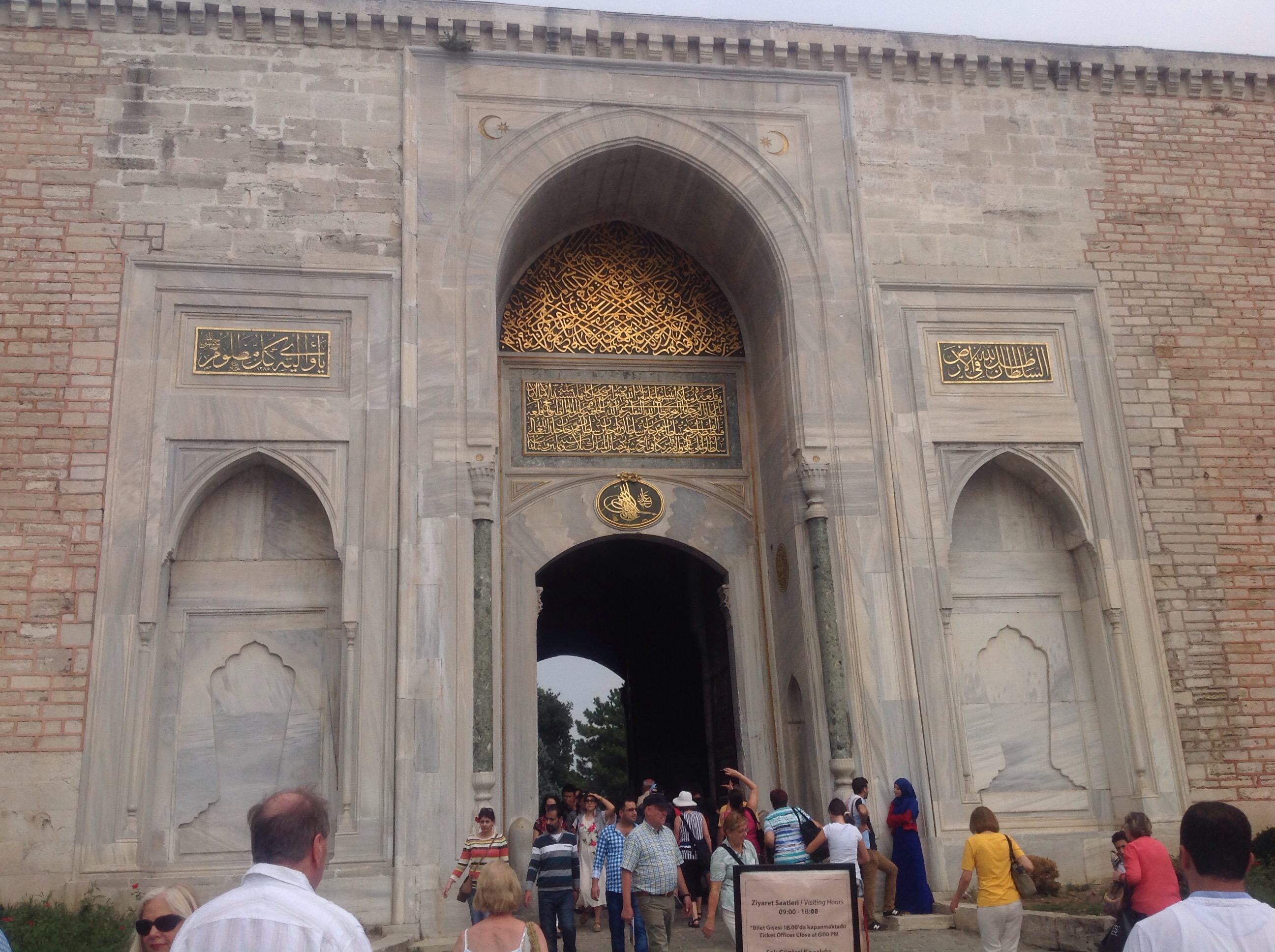 entrance to the Palace 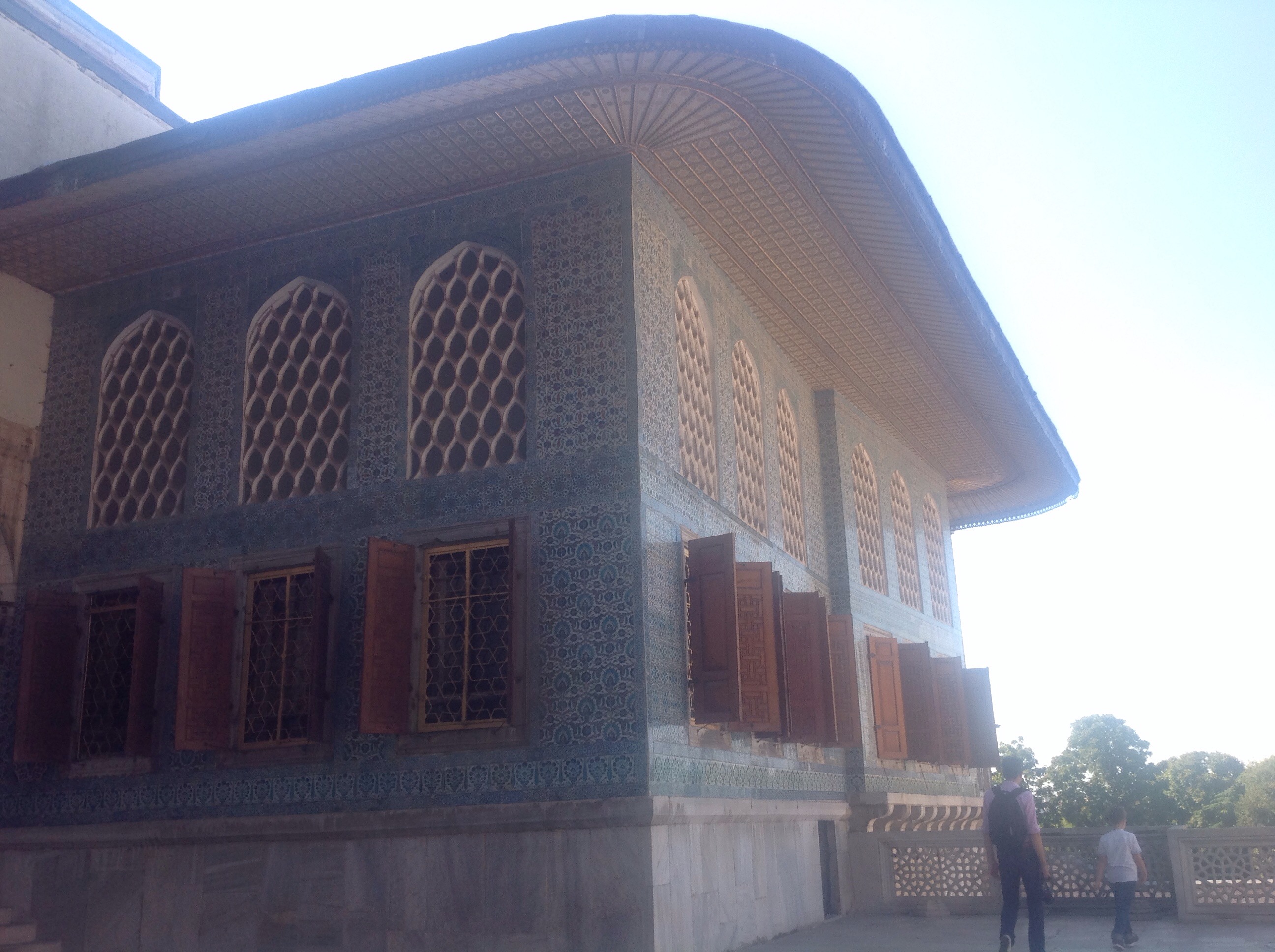 this building was where the Queen Mother, or I suppose Sultans mother lived. 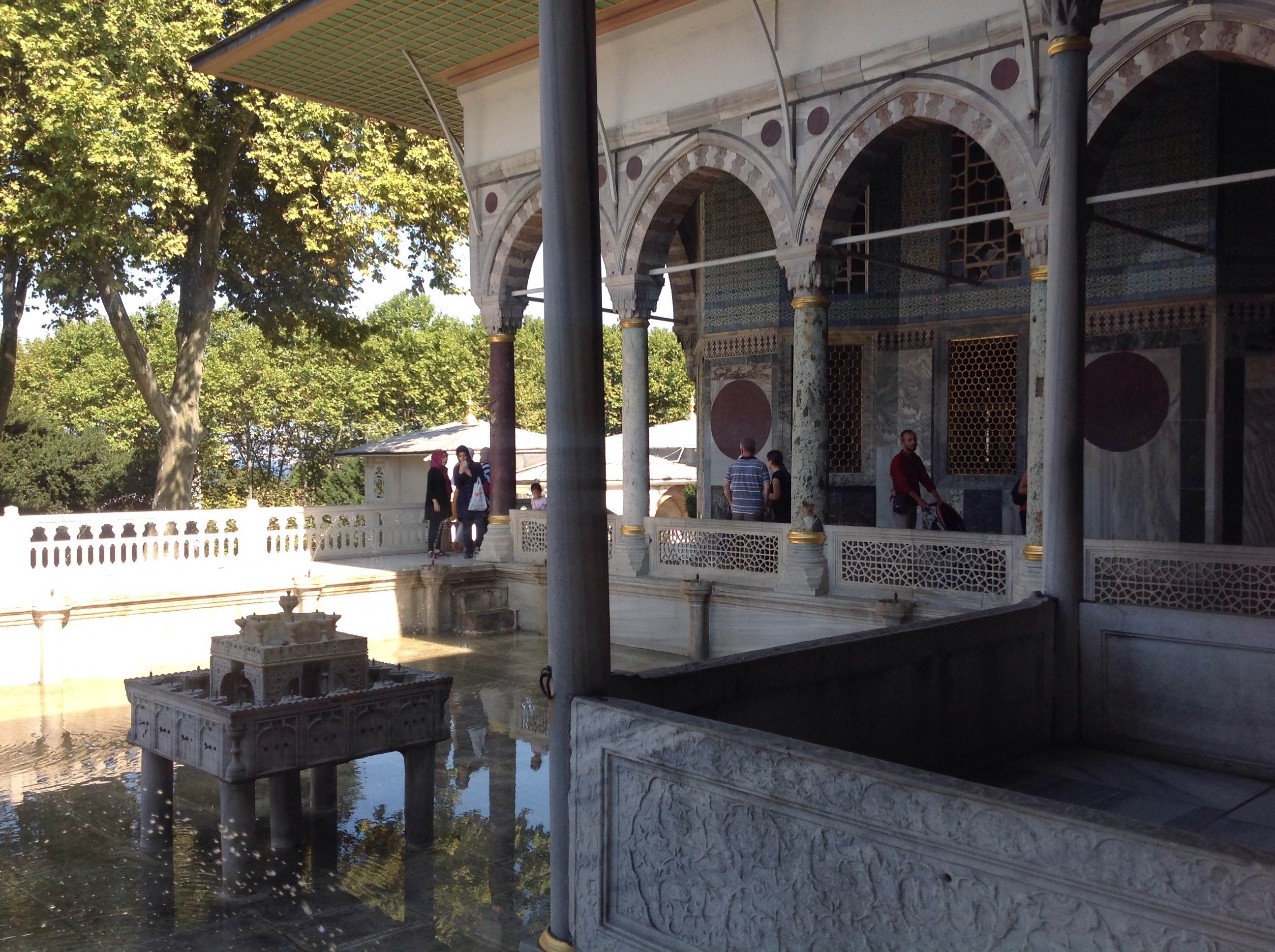 part of the palace garden

The Grand Bazaar was very cool in some parts, namely the areas for Antiques, Jewllery and Carpets. These were focused in the centre of the Bazzar. The surrounding areas were spoiled somewhat by vendors peddling useless shite. Worth a visit for sure, but the Spice bazaar is much livelier and with more interesting stalls. Big buckets of spices, you could buy a kilo of saffron for 300TL. There were lokum (Turkish delight) stalls and all sorts of other weird treats.
There’s a bunch of other stuff too, the Taksim area north of the Galata tower is quite cool with a long boulevard running from the Tower North up to Taksim square and numerous little alleys and side streets to wander off into.
Kadiköy, the neighbourhood on the Asian side of the city where Ozgur lived was really nice too, and I’d probably recommend to stay there if you were heading out to Istanbul. Not only is it a bit quieter, a bit more sane compared to the hustled and bustle of the European side, since this is a neighbourhood where a lot of normal people (as in not super rich) actually live there’s loads of nice place to eat and drink that are affordable. Plus you get to ride back and forth across the Bosphorus every day and see the city from the water. 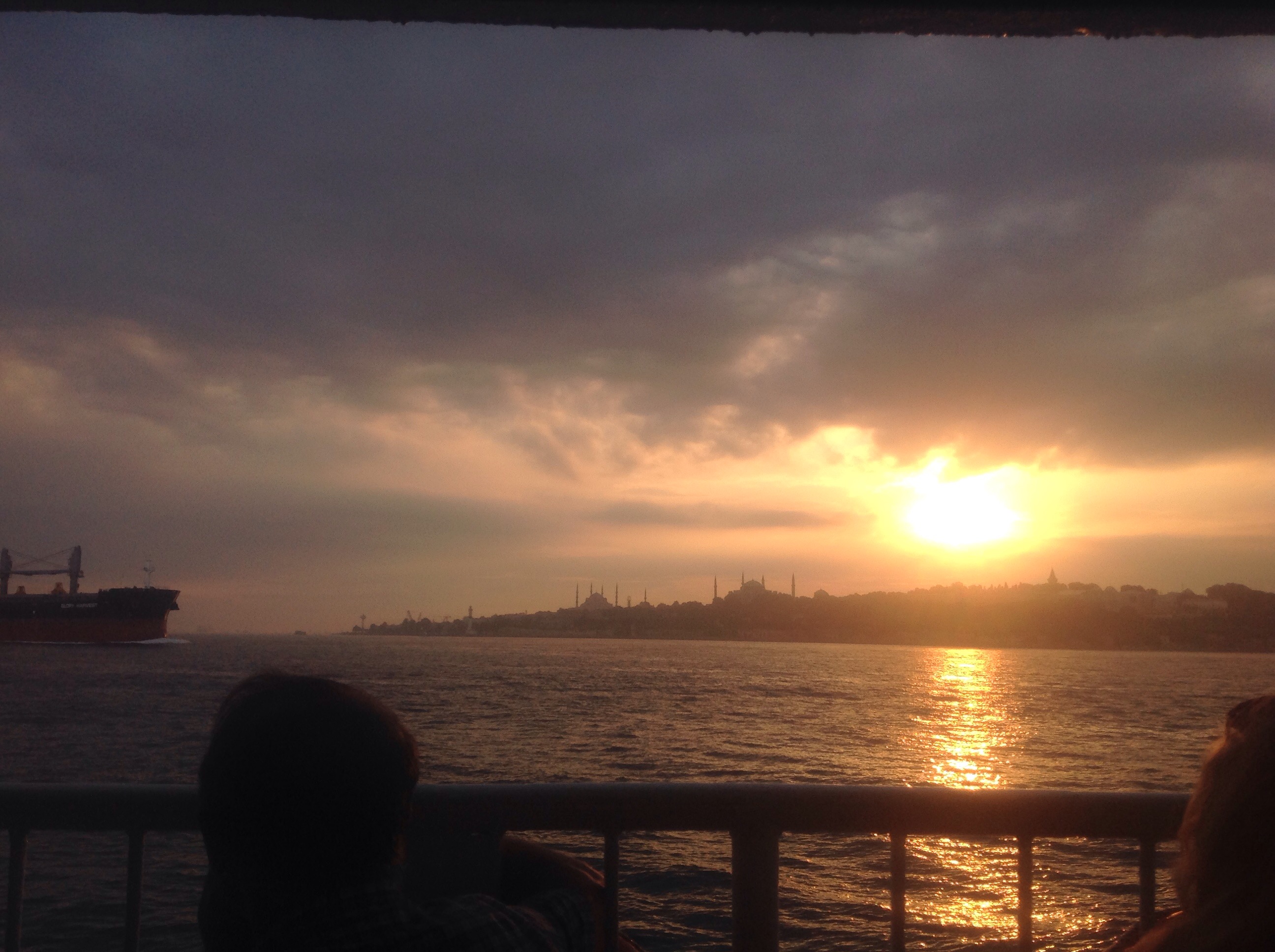 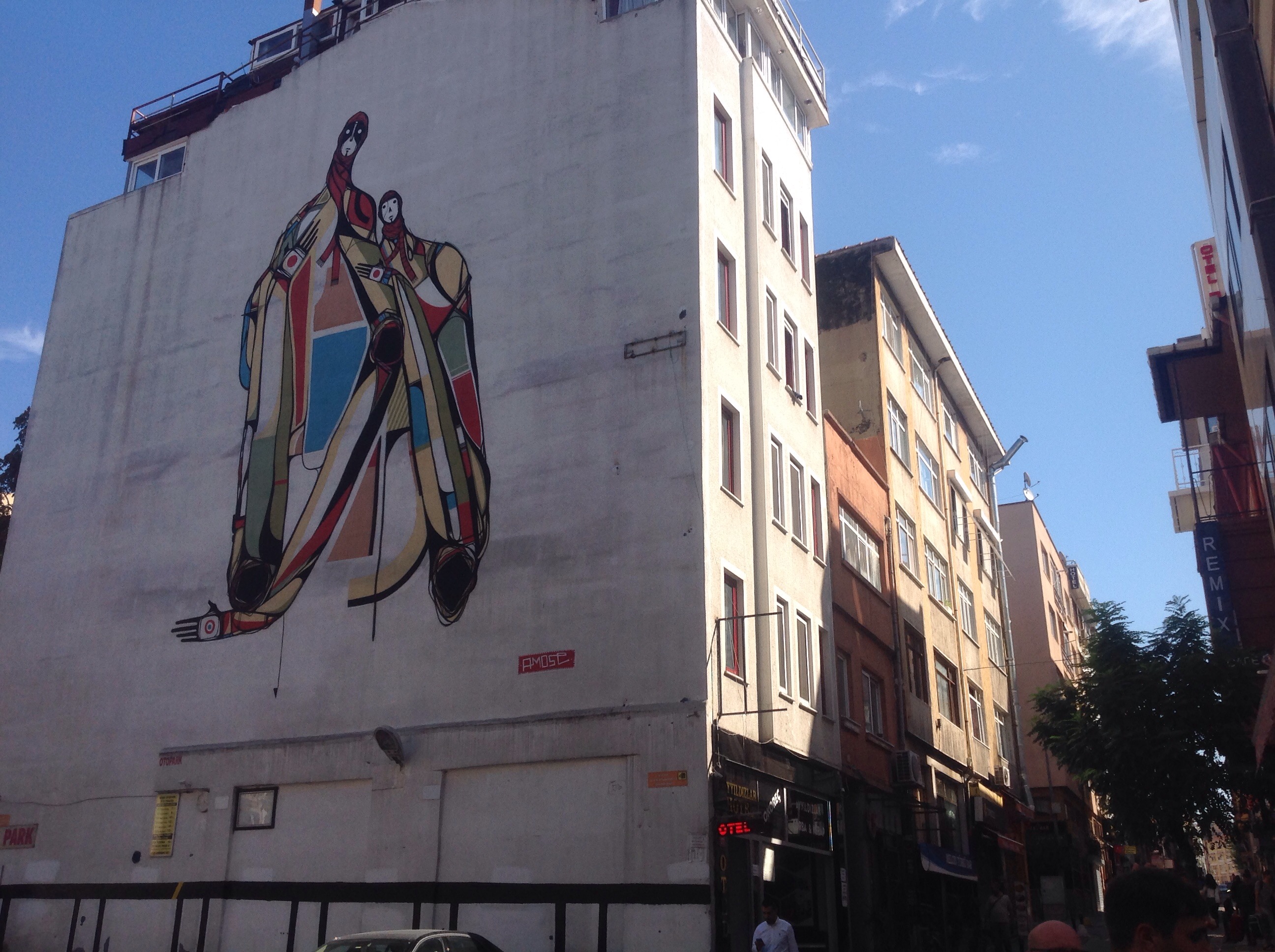 some nice wall art around Kadikoy 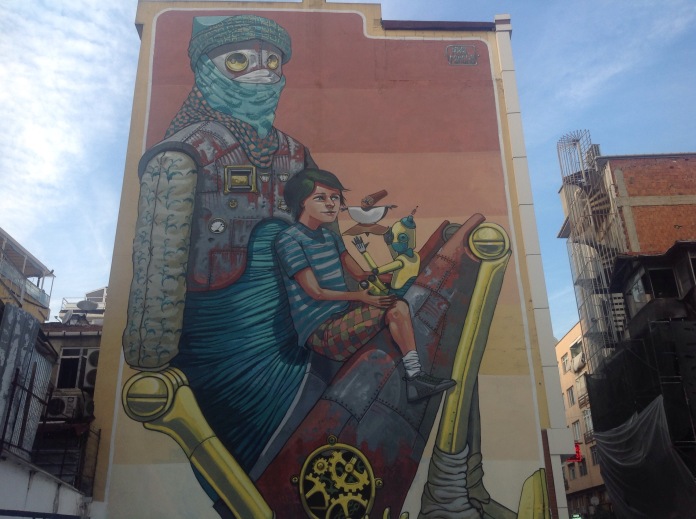 Now since this holiday Bayran was going on a lot of people were leaving Istanbul or coming to Istanbul to see their family. The were two things we had to buy while in the city, a good winter sleeping bag and a map of Turkey. Unfortunately it turned out that all the book shops and camping stores were closed overt the holiday, which ran from Wednesday to Sunday. Fortunately Ozgur was complete relaxed and welcoming and let us stay with him much longer than we planned. We waited out the holiday for four days until the shops were back open and we could get what we needed.
We had a good time waiting it out though. Ozgur place was jammed over Bayran: he had us two, his friend Šefaq who was hanging out for a couple of weeks, his two cousins Yevuz and Görgen and at one point two more Couchsurfers from Germany, but they decided (probably wisely) to go with one of their friends to the Black Sea instead. So we had a great time, even if our plans were delayed a bit. 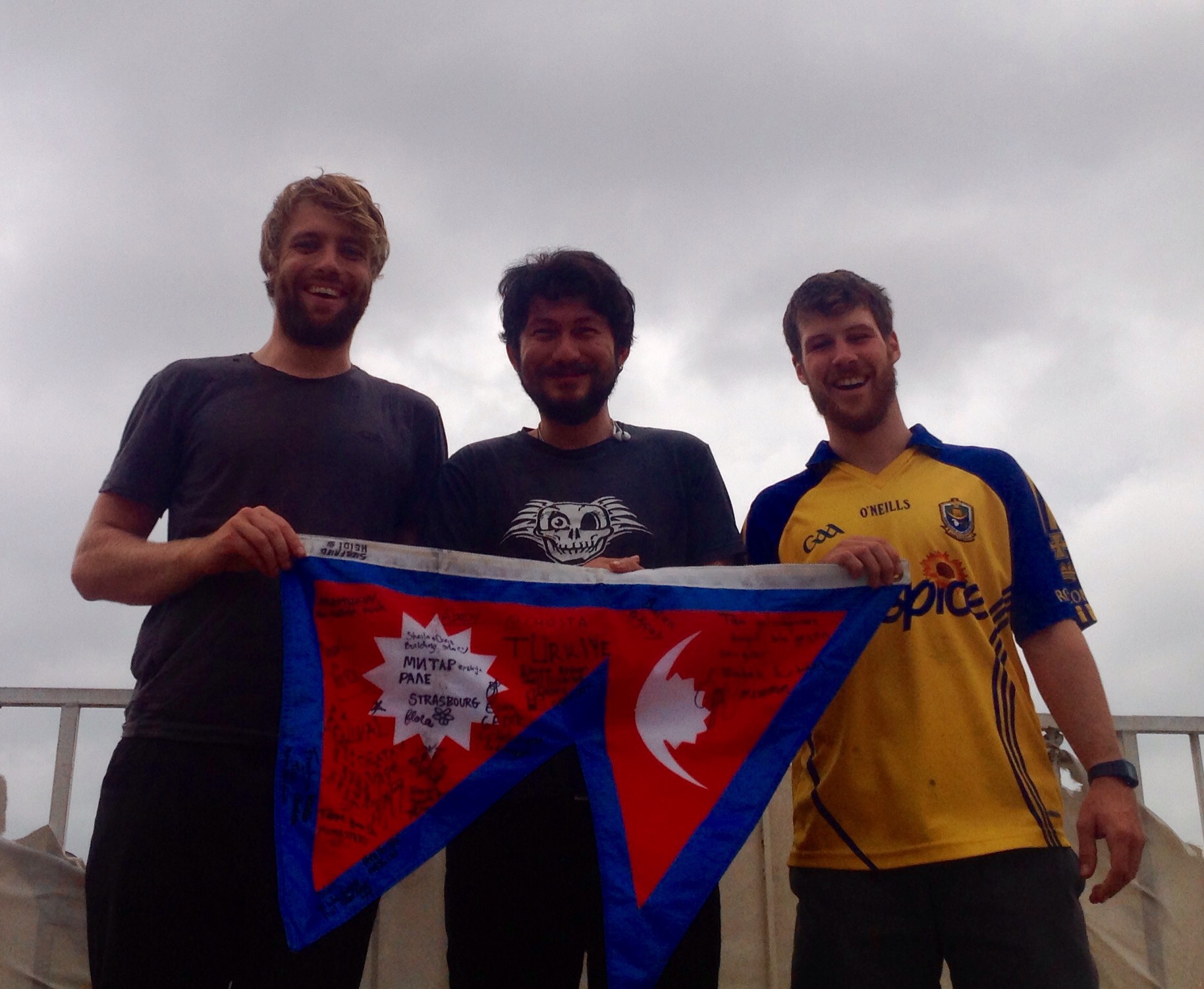 photo with Ozgur on our last day

We did manage to pick up everything we wanted in the end, we even found an English Lonely Planet for Iran. The days leading up to our departure and the day of were windy and rainy. The day we left started out overcast and blustery in the morning but by late afternoon it was drizzling and the wind blowing hard. We had spent most of the morning reorganising how our bags were packed since we now had a huge winter sleeping bag to contend with. We also finally fixed the tent poles (the tent poles that broke on the first night in Wales).
We seem to have a curse on this tour, no matter how hard we try we can never leave a city in a timely manner. The day of departure finds delayed somehow and in the end we only ever make it a couple of kilometres out of the city, if at all (see: Munich, Split, Sarajevo, Belgrade and Sofia). This time it wasn’t a freak storm (though the weather was bad) or bikes breaking, we just plain got lost. Or rather, we lost eachother. At a certain junction I went right while Finn went straight and it took two hours before we found eachother again.
The rain and wind were still going strong and it was getting late, daylight was starting to fade. There was a big park by the coast beside the road out of town so we made our way down there and waited for it to get dark before riding in and camping behind a building to get some shelter from the rain. We were woken in the middle of he night by a guard in a big black rain poncho with the rain still pissing down. Once he heard us spouting English though he smiled and let us be. 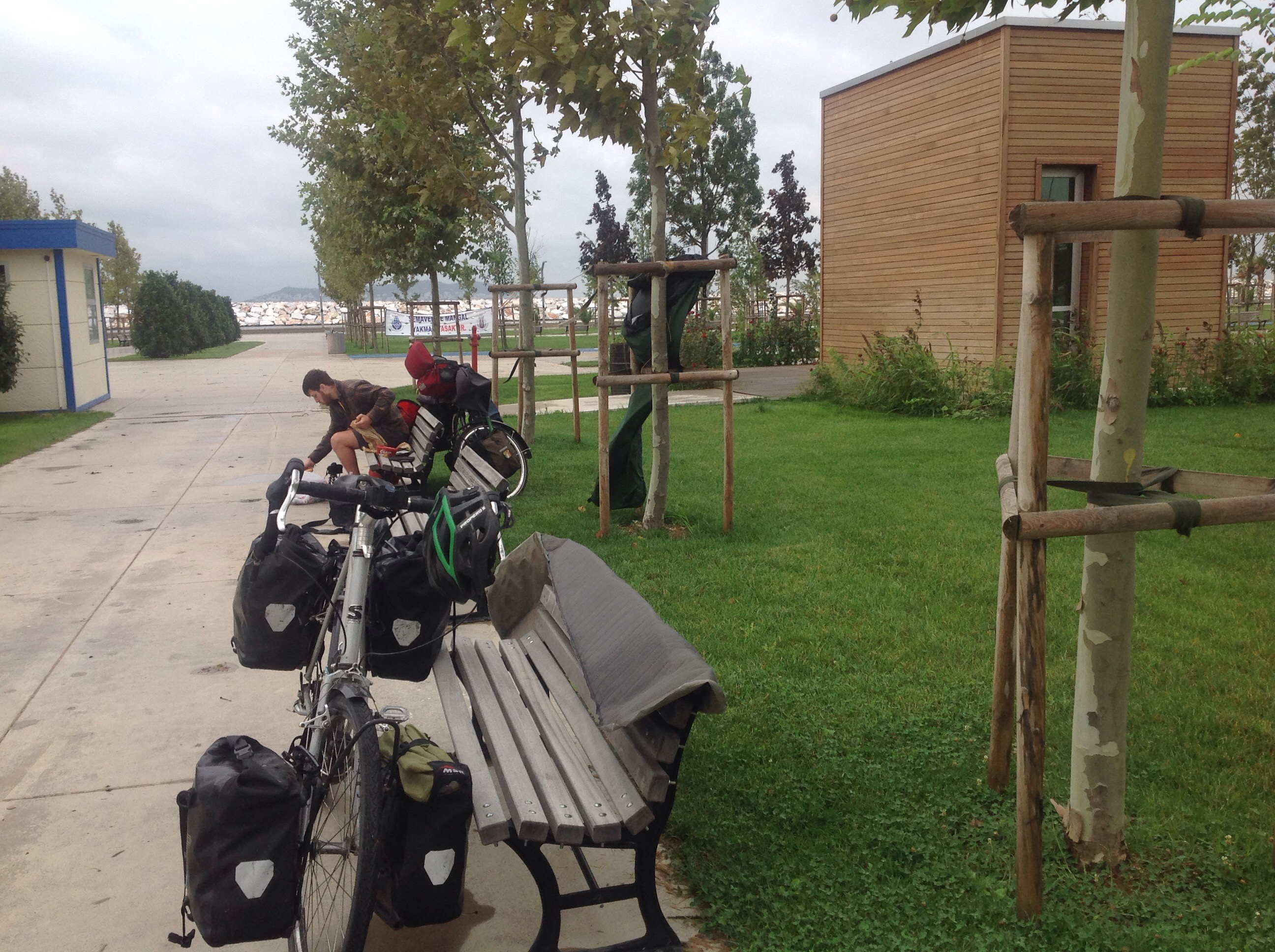 drying our gear out after the rain, the building we sheltered behind on the right