This will probably be a short post as not much really happened except towards the end of the day and the cycling wasn’t all that interesting.
Leaving the Shell after a morning of taking photos with Erdem we got onto the main road that we took out of Edirne yesterday. We were going to be in this road for the next two days until we got into Istanbul, we didn’t have a map of Turkey yet and it was the quickest route to the city. So it was good road, direct and well signposted. The downside was the the riding was dull and the scenery too. It was all rolling land for miles, and the road not exactly busy but certainly not quiet either. I took on photo and it looked like this for the rest of the day, so that’s about it for the days cycling. 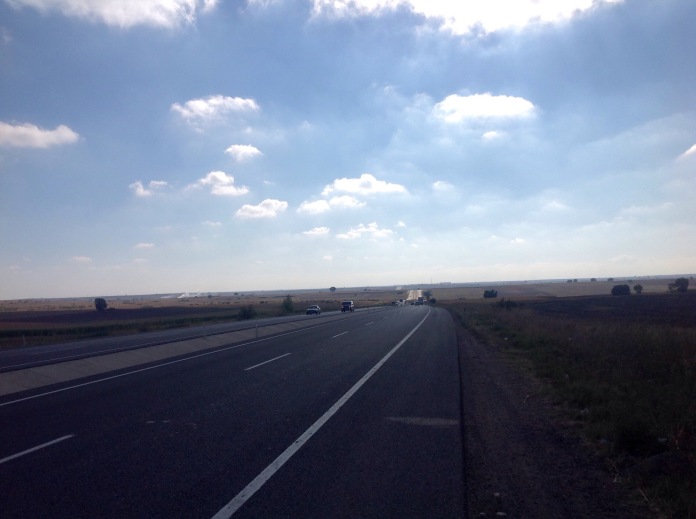 In condition like that you tend to just cycle without stopping much and as such cover a lot of ground quickly. By lunch we had reached the city of Lülbergaz about 70km away and pulled in for lunch and then a look around the city.
It was smaller than Edirne, but nice in its own way with a very busy Main Street that we walked around. At some point we realised that the first Ireland game of the World Cup was on so we spent some time looking for that.
There was one sports bar in the city that didn’t really understand what rugby was or what we wants to watch so we couldn’t get them to look for it on the tv. After a bit of wifi research we found out what channel was showing the rugby World Cup in Turkey and returned to the bar asking them to switch over to ‘tivibu sport 2’. This channel was showing the match so we sat down to watch at, and were soon joined by most of the staff. These were a bunch of young guys who were really curious as to what was going in and got a real kick out of trying to figure out the game.
By the time we left the city it was late enough and the sun was setting. We had figured out while riding that there probably wouldn’t be any good camping spots so we figured the best option would be to check at the petrol stations we passed if we could camp there.
It was dusk by the time we found one that had enough space we felt we could comfortably camp at (if they allowed it). We asked one of the staff if we could camp the night there and he seemed ok with it, but then said he couldn’t since his boss wasn’t around to ask. We didn’t want to push him so made to leave after using the toilet. As we were about to go he came over and pointed to an empty lot beside the station and told us we could camp there is we left in the morning. This was great news, we knew it was going to be hard to find camping so we could now go to sleep easily. We spent the evening in an empty lot next to the busy road to Istanbul. 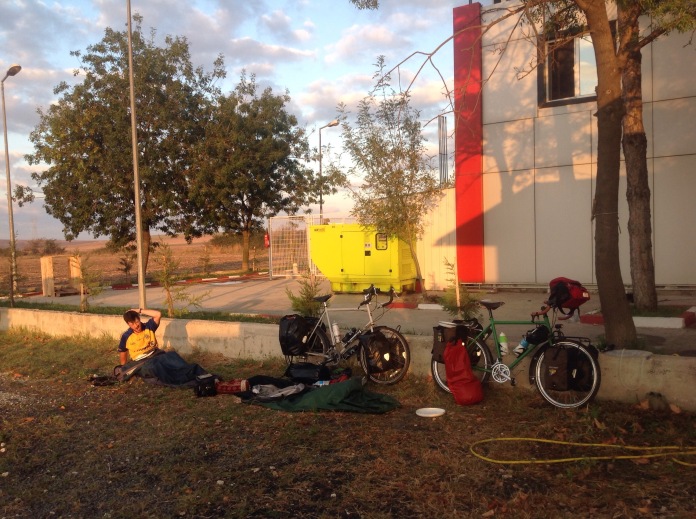 waking up at the petrol station lot