It’s always an exciting prospect when there’s a border crossing coming up. Today we would be crossing into Bulgaria, back into the EU, but also the last European country of the trip – after Bulgaria would come Turkey and a whole different part of the trip, but that’s future. Today, the last bit of Serbia and the start of Bulgaria.
The morning consisted of riding down out of the mountains and into the flat land that ran between the last big town in Serbia before the border of Pirot. The ride down was similar to the previous days, narrow roads that ran along the hills. But today was overcast, and with a blustery headwind which slowed us a bit (but not much)

looking down the descent into Pirot

Pirot wasn’t all that much to look at once we arrived. It bore all the marks of being s border town, lots of place changing money and selling cartons of cigarettes. We arrived a bit before lunch we stopped for a break. While we were sat outside a cafe a big tall Serbian guy came over to us and started chatting in English with us.
He had seen our bikes and heard is talking and wanted to find out a bit more. Never got his name, but he was an interesting guy. From Serbia originally he now lived most of the time in Sweden with his family and was back in Pirot visiting. He was very interested in the trip and after talking a while was suddenly struck with an idea!
He had friends who worked for a Serbian TV station not five minutes down the road, they would be very interested to talk to two Irish guys cycling to Nepal who had just crossed their country and he raced off to find them.
It would be great to be able to say we made it onto Serbian television, but unfortunately his friends weren’t available at the time and we had to move on.
The road from Pirot to the border was flat, straight into a headwind and boring enough not want further description.
We crossed the border a bit before three with no difficulty. The border was surprisingly quiet, I would have expect more people to be crossing over, maybe if we arrived in August there would be queues of people heading into Bulgaria to get to the seaside. 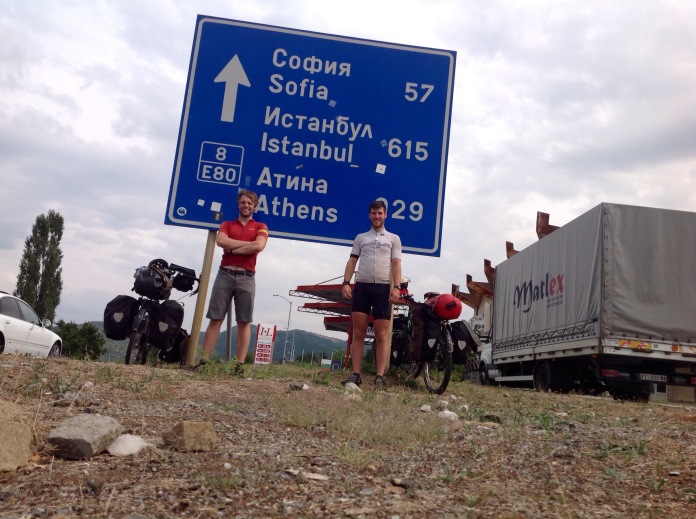 After the crossing we climbed for a bit over an hour across the highland that separate the two countries geographically. The wind was starting to pick up and the sky beginning to darken. The fist Bulgarian town over the border was a place called Dragoman. We picked up some stuff for dinner at a market there and then checked the weather forecast and saw this:

The wind was blowing stronger and we figured we should start trying to find somewhere to camp before the storm stated to cross us. We rode out of Dragoman for a while, intending to stop as soon as possible but there were no suitable camping spot up here on the exposed highlands. As a result we ended up hauling our bikes through some bushes, across a train track and into a field where we took shelter from the wind in a little dip in the field at the corner, covered by trees on two sides.
That night just before the rain came we were chased into our tents by the most vicious mosquitoes we had encountered. It started raining early on and continued non stop, but our spot was thankfully sheltered from the worst of the wind. 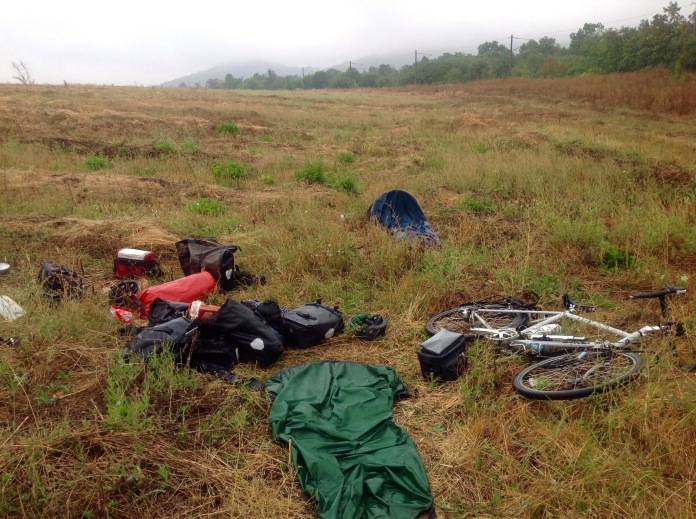 camp spot the next morning

9 thoughts on “Day 47: Donja Kamenica to near Dragoman/outside Sofia (Into Bulgaria)”