The day began with a descent into the town of Vlasenica where we picked up some bread out of a bakery for breakfast. The road continued downhill for the rest of the morning after this. We were following a river from its spring in the mountains we came out of yesterday, down down out of the foothills where it got a wider and slower until we finally reached flat ground two hours later, the river by now slow and swollen, cutting through the land in huge meanders.

church perched on a cliff, the river is to the left 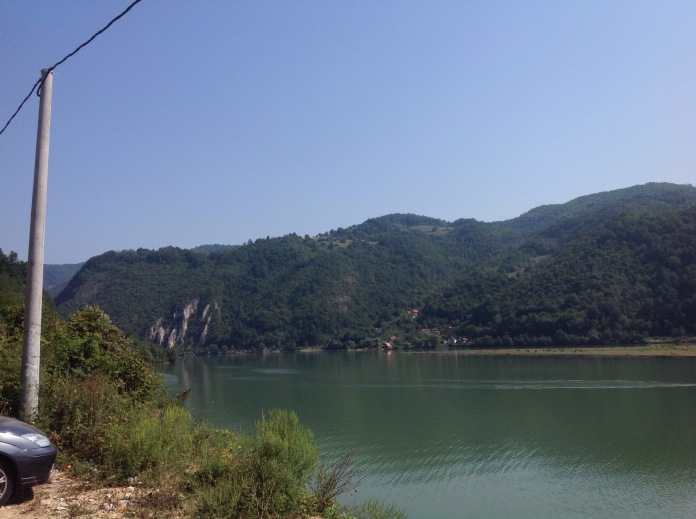 We followed the bank of the river for maybe thirty minutes, passing by small shacks, fisherman and numerous little wooden jetties. There were a lot of small tunnels that punctuated the road where rocky outcrops the river couldn’t erode remained.

We arrived at Zvonik, the last Bosnian town we would pass through before crossing into Serbia later on today. We got rid of the last of our Bosnian Marks on a refreshing ice coffee (it was hot, we hadn’t noticed on the descent what with the flowing river on one side and the cool rock face on the other).
Leaving Zvonik an hour later we crossed the bridge and found ourselves crossing into Serbia. Immediately we found that the road wasn’t in as good nick, there were less houses around and it had gotten hotter as we moved away from the banks of the river.

The Serbian border. the gaurds here wouldnt let us get a shot with the bikes

We rode along as it hotter and hotter. We hoped to stop at a market or somewhere to get lunch, but with no money and no exchange stands or ATMs in sight we had little reason to stop, so we just pushed on. After another two hours of this though, we decided to wait out the rest of afternoon in a small cafe attached to a tiny petrol station next to the road. We got going again at 5.
At 6 we pulled into the town of Lesnica where we came across an ATM and got out some local currency. Now we were on the lookout for somewhere to eat. I locked up the bikes while Fin went over to a young guy hanging out beside a promising establishment to see if we could get food there. From over by the bikes I heard the guy exclaim “you can speak English, its ok!” This was Mihail.
Mihail owned the place Finn had approached, and while his place didn’t do food, the butcher next door had a grill out the back where he would cook what he sold. Mihail recommended what looked like a burger with a bunch of herbs and spices and then took us next door to his bar where he bought us a beer and had a chat while we waited for the food to cook.
We ended up staying and talking with Mihail until it got dark, he was a really interesting guy with loads of stories and insights about growing up in Serbia and how it was today. We left, thanking him and promising we’d get in contact again before Christmas. Night had fallen since we had been taking and we rode out into the dark, lit by the street lights. The road, which before had been so devoid of development now had houses and farms lining it the whole way. We pulled off for a bit until we found a small copse of trees that we could haul our bikes between into a small clearing within where we slept, or at least tried to, through one of the warmest nights so far.

campsite, the next morning