In the morning we doubled back on the path we had followed mistakenly the day before and rolled bikes down the embankment back onto the road. We followed this road, the route 28, into the next town Horb am Necker where we were able to pick up a cycle route for a bit along the river. 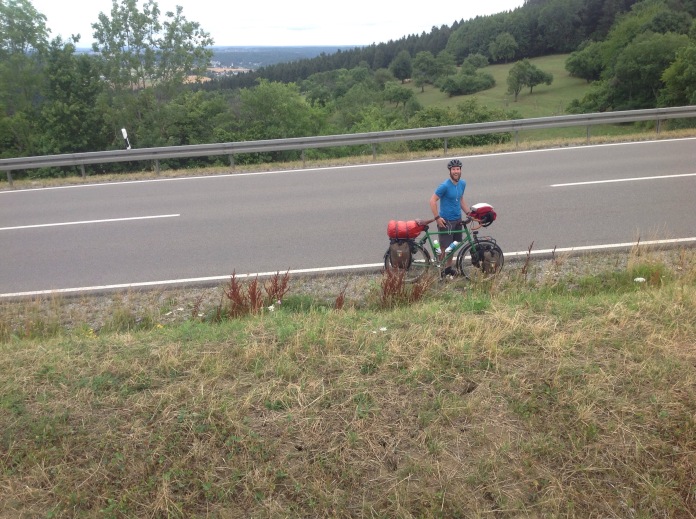 rolling our bikes down the embankment onto the road

This is how the day would go, the cycle network was s bit too indirect for us and there wasn’t an official cycle route to Munich, so we followed the cycle route as it suited for ten or twenty kilometres before getting back on the Route 28 (the main road that went all the way to the next big city, Ulm. Not the autobahn) to join up with a new cycle route a few kilometres down the road. 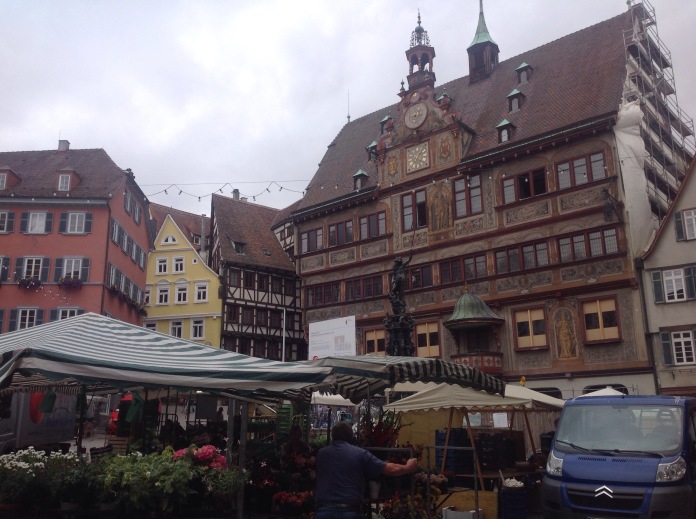 We got lunch in the surprisingly exciting town of Tübingen. It’s a pretty well preserved old town with a large young population thanks to the University. It was on the way out of Tübingen that Finn started to notice a problem with his rear hub. While starting a climb the freewheel went and he couldn’t pedal. We stopped, Finn took it apart, realised the problem was beyond both our (vast, of course) expertise. So he took my bike back into town to get it fixed or replaced and I hung out by the road. 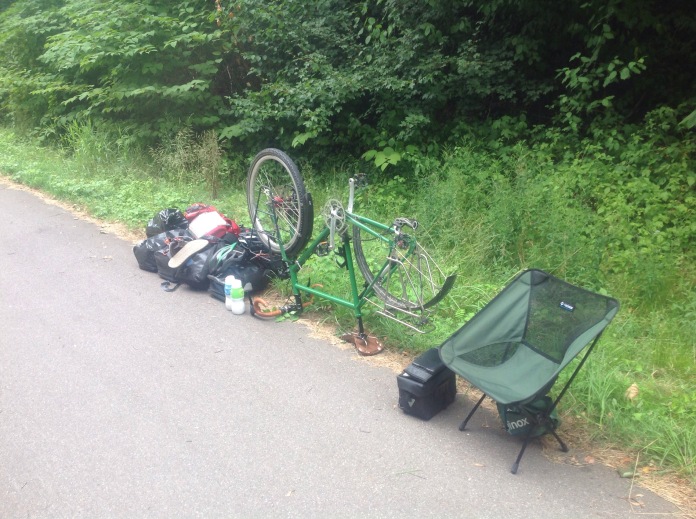 Finn, I’m sure, went on some wild adventure around Tübingen with a wheel on his back, searching for a German mechanic to repair his American hub. For my part I sat by the road, wrote some blog posts and napped.
Finn returned two hours later with two wheels on his back. It had been impossible to fix the hub, nowhere had the parts needed and it would take months to get them in so he had to pick up a new rear wheel. Once that was done, though, it didn’t take long to get back on the road. 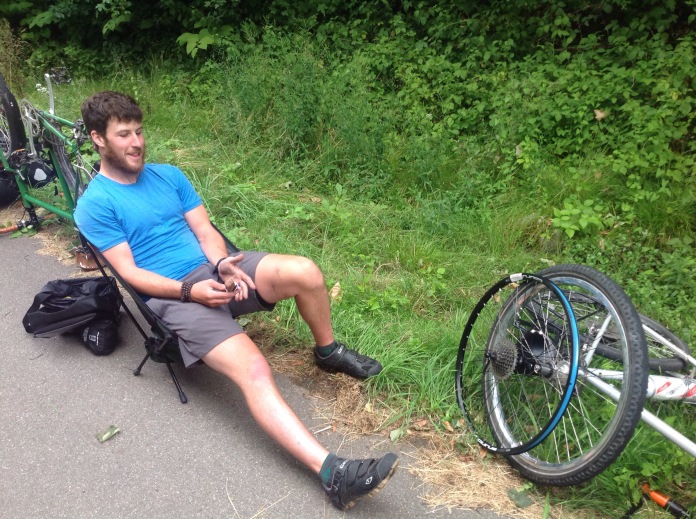 Finn giving me the downlow on his journey back into Tübigen

We got a bit delayed the next town over in Reutlingen. Finding our way in and navigating to the correct road out of town both took way longer than we would have liked.
These two setbacks meant that we ended up riding until sunset which we really relaxing in a way. Shortly before we finished we were riding through lovely quite country roads on rolling hills up into the orchards and vinyards that dotted them and down into the villages in the valleys. 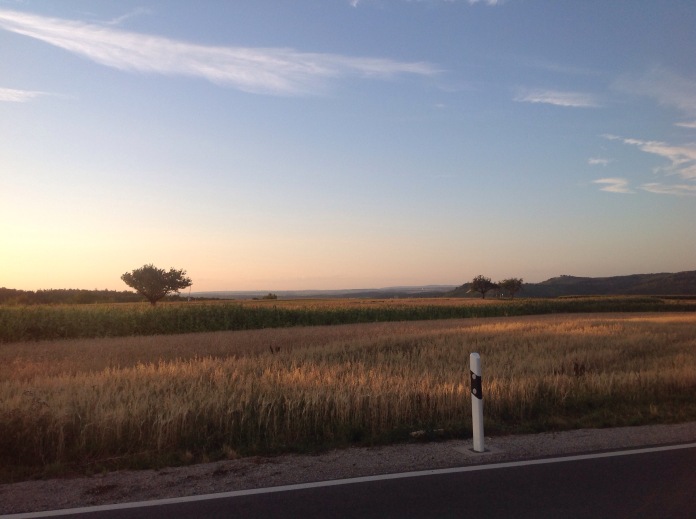 One last steep climb before we finished brought us to a fantastic palace to camp for the night, the top of a hill that looked back over the plateau we had crossed with the Schwabian Alps of yesterday afternoon off in the distance. It was a great end to what could have been a disastrous day. 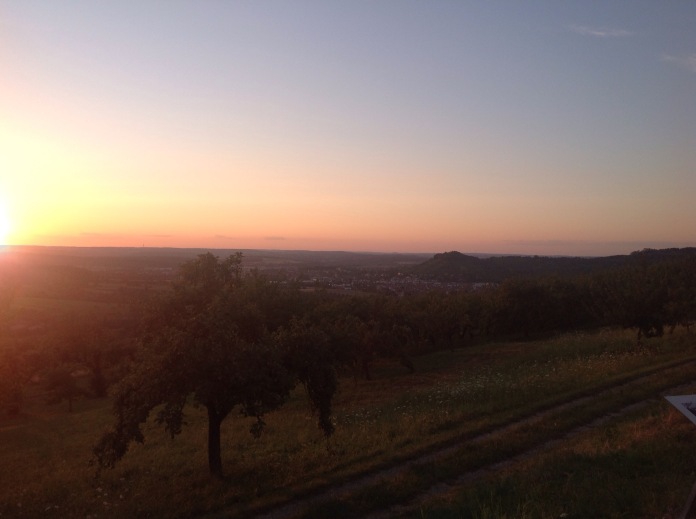 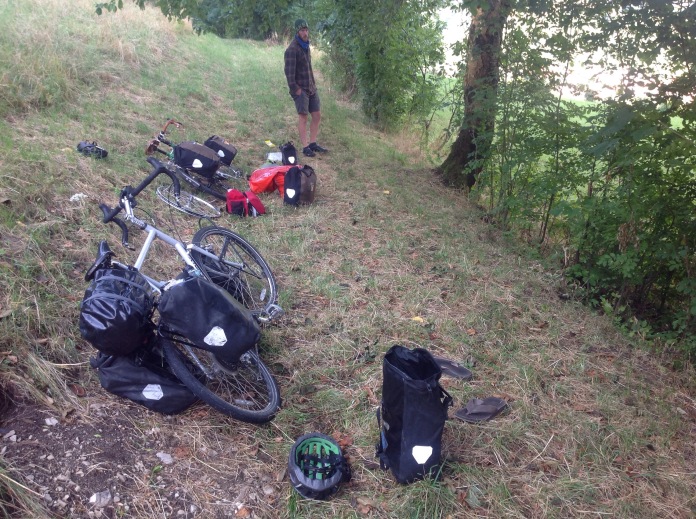