We had a few mishaps at the start of our trip. Finn had left the poles to his Bivvy bag back in Dublin, but we had brought a tent also that we could use in an emergency such as this. Well, we’ve had the tent for a while, too long it turned out as while Finn was setting it up on the first night the poles snapped.

We also discovered at the end of the day yesterday Finn had a flat rear tyre. Fixed it in the morning, packed up and got ready to go…only to find it flat again. This time as we were changing it an coupl on tour came up the road and gave us a hand while letting us know a bit about the road ahead. Apparently there was bike route that would take us all along the coast of North Wales and into the uk. As they rode off we got packed up again and set off. After a while Finn had another flat. We gave up on trying to fix it, we had searched for whatever debris was causing the puncture and couldn’t find it. It was a slow enough leak so we pushed on to the next town to find a bike store. 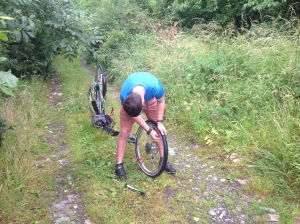 first repair of the trip

The route the couple had suggested, the national cycle route 5, turned out to be really nice following the coast and then turning inland for a bit over rolling hills. 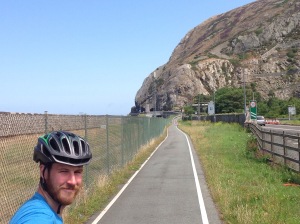 The route 5 brought us into the beautiful old town of Colwyn, we got lunch here and directions onward to a bike shop where we could get the tyre looked at. 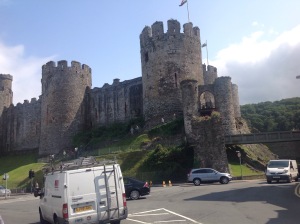 the castle at Colwyn

The ride from Colwyn to the bike store was short enough and here we found the culprit: a tiny piece of gear cable, about the width of a hair. After it was all sorted we joined back up with the route 5 onward towards Chester.

getting the bike sorted outside Colwyn

From Colwyn the ride was easy and pleasant along the coast with a strong tailwind the whole time. We passed through beaches, caravan parks and old British seaside resorts.

We had hoped to get to Chester today but the difficulties in the morning had delayed us by quite a bit. The route 5 turned inland and at 7:30 we found ourselves riding through the settlement of Flint. A local very kindly agreed to let us camp in his field for the night and we settled down to lentil dinner overlooking the green hills of North Wales

One thought on “Day 2: Bangor to Flint”