The night bus got us into Germu in the early afternoon. After putting the bikes back together and a grabbing some lunch we were underway. Anyone that started talking to us presumed we were going to Lahsa as its quite a popular route for Chinese tourists to travel on bicycle or motorcycle. Of course we weren’t going to Lahsa as its pretty much impossible to cycle independently in Tibet legally, and given the amount of checkpoints the government has built up in recent years, just as difficult to do so illegally.
It took us a bit of time to figure out if we were heading out if the city in the right direction. The railway that ran through the city had no level crossings in the centre of town so we had to ride all the way out to the city limits before we could get on the correct road out of town.
The road out of Germu hasn’t been completed yet so we were riding on dusty track for the first couple of kilometres. Although we were passed by some cars most of the traffic was made up of large trucks hauling freight into Tibet. After half an hour of riding in the dust trail of all these trucks the road joined the Trans Tibet highway that we were following for the next few days. The amount of traffic increased again and it seemed like a non stop stream of trucks were passing us by at all times.

some Chinese cyclists we met heading the other way

Before too long we arrived at the first police checkpoint. We knew it was coming up long before we saw any trace of a building by the long backup of trucks that snaked along the road for a good 5 kilometres before the checkpoint. We were a little bit nervous approaching the checkpoint, some cyclists have reported no being let through as the police think they’re going to try sneaking into Tibet. We had our map with our rout to Yushu, the next big city well to the east of Tibet at the end of the route S308: a road that travels generally East-West across Qinghai province towards Sichuan province. Along with a hotel booking in Yushu we had made (booking.com, free booking free cancellation) we felt we could prove we weren’t heading to Tibet if it came to it. 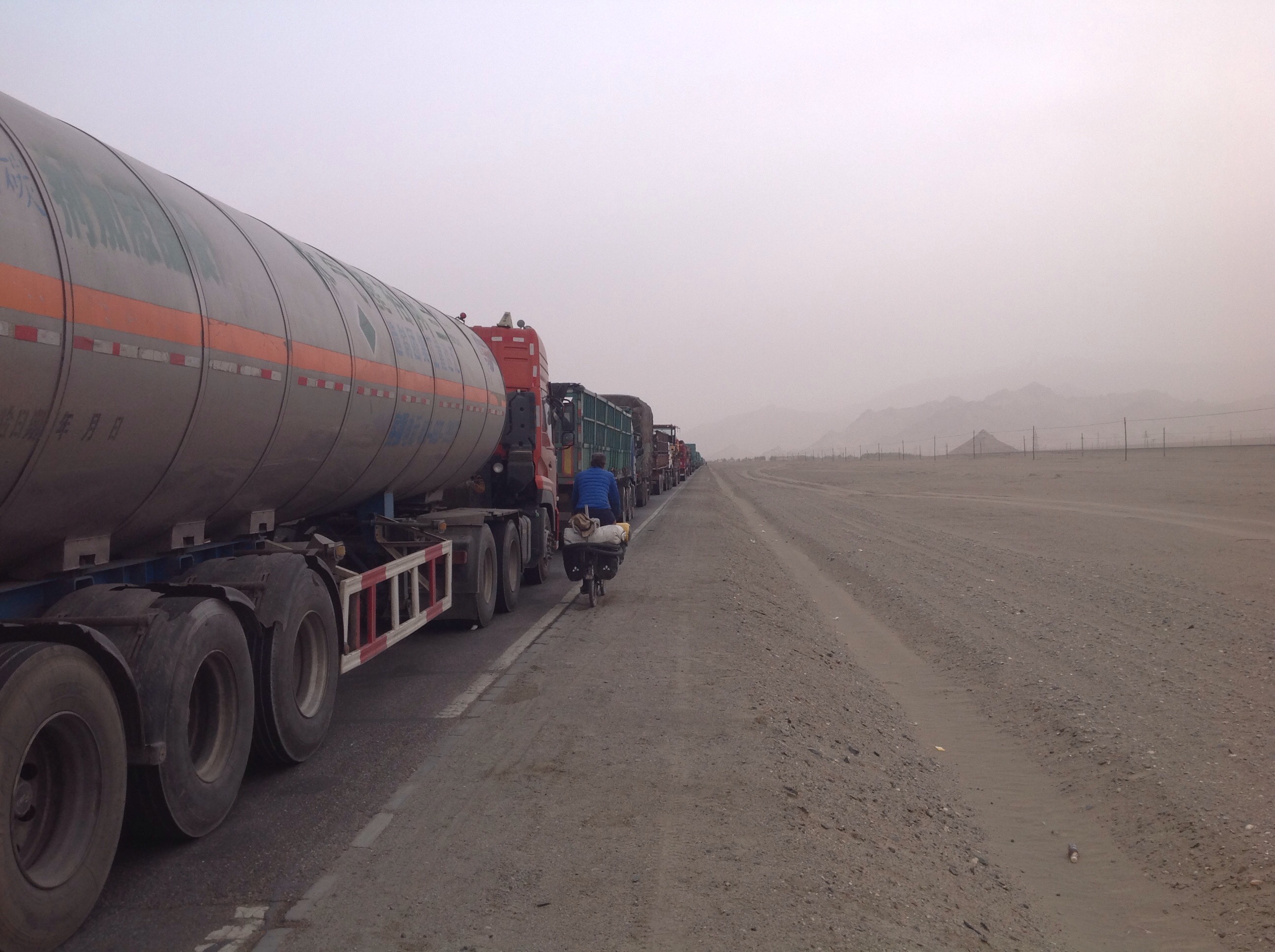 the back-up of trucks waiting to get past the checkpoint

As it happened we didn’t really need any of that. The map helped when one of the police asked where we were going, we could point to Yushu. He then asked ‘Lahsa?’ We said no, and then they just took copies of our passports and let us on our way. We stopped at a petrol station on the other side of the checkpoint where we are dinner.
As we were preparing to leave the petrol station and find somewhere to camp a young Chinese guy on a motorcycle pulled up and excitedly asked where we were from, and then if he could ride with us (this was communicated mostly through gestures, neither of us could speak the others language). We tried to let him know we were just riding for a couple of minutes until we found a somewhere to camp, which I think he sort of understood.

riding through the desert hills in the evening light

We found somewhere to camp, a small track that ran parallel to the main road behind a big rock. The Chinese guy hung out at our camp for a while. He downloaded a translate app on his phone at one point so he could ask us more detailed questions and seemed overall very impressed by the cycle touring and very happy to have met us. He was travelling to Lahsa himself. ‘Are you going to see the Potala Palace?’ Finn asked by pulling out a 50 yuan note and pointing at the Potala palace illustration thereon. ‘No’ he replied (through his translate app) ‘I travel to feel the feeling’.
He wanted to stay with us all night but it was getting cold so he moved on. We settled down to sleep, our first night in Qinghai.

camping next to a drained lake