We knew that if we pushed it today we could arrive at Qiemo in the evening and have showers and fresh food, a tantalising prospect to push us on.
Not much to say about the morning ride: a dusty, dim, dull cycle with little visibility and a strong headwind. We had gotten pretty efficient by now swapping who was breaking the wind every 10km which enabled us to keep up a decent pace.
50km from where we started this morning a structure began to loom out of the haze. Was it a petrol station, with a shop stocked cool drinks and tasty snacks? No, it was a police checkpost. In fact the police here were really friendly and after they got a photo with us allowed us to cook our lunch in the corner of the checkpost. A nice solid concrete surface to sit and cook on made a world of difference.
The police even came out with some bread for us to have, and a couple of passengers from a bus stopped at the checkpost came over to say hello. They returned with some bread too just before their bus left so in the end we had a great big lunch.
We were close enough to Qiemo now. Small homesteads and warehouses started to spring up indicating civilisation was close. 30km from the first petrol station emerged with a fully stocked shop where we got our cold drinks and snacks at last. Not long after that stop we took the turn off for Qiemo and out our backs to the wind for the first time today. A huge relief that propelled us all the way to the city.
At first it seemed that this might be a relatively under developed Chinese City with traditional style houses and market streets and stalls. We turned a corner though, and there it was: the modern Chinese City in all its wide-avenued, huge municipal building glory.
We were looking for a good, cheap hotel recommended by our guidebook. The address provided was vague and asking people with our limited, phrase book Chinese was not working. We wandered around the bazaar area eliciting “hellos”, toothless smiles and handshakes from old Uigher gents, request for photos and baby holding and small bands of schoolboy followers. Foreigners evidently were a rarity here. The interest in us here was much more digestible than the Pakistani loom as despite being insatiably curious the Chinese and Uighers provided a welcome amount of personal space.
Eventually André had the bright idea of asking someone working out of a computer shop. “They’re always intelligent” he asserted, and correctly too as the guy we ended up asking not only knew where we wanted to go but drew us a little map to help us along.
We got to the hotel, checked in and enjoyed some long, rejuvenating warm showers. The amount of sand and dust on the shower floor by the end was alarming. 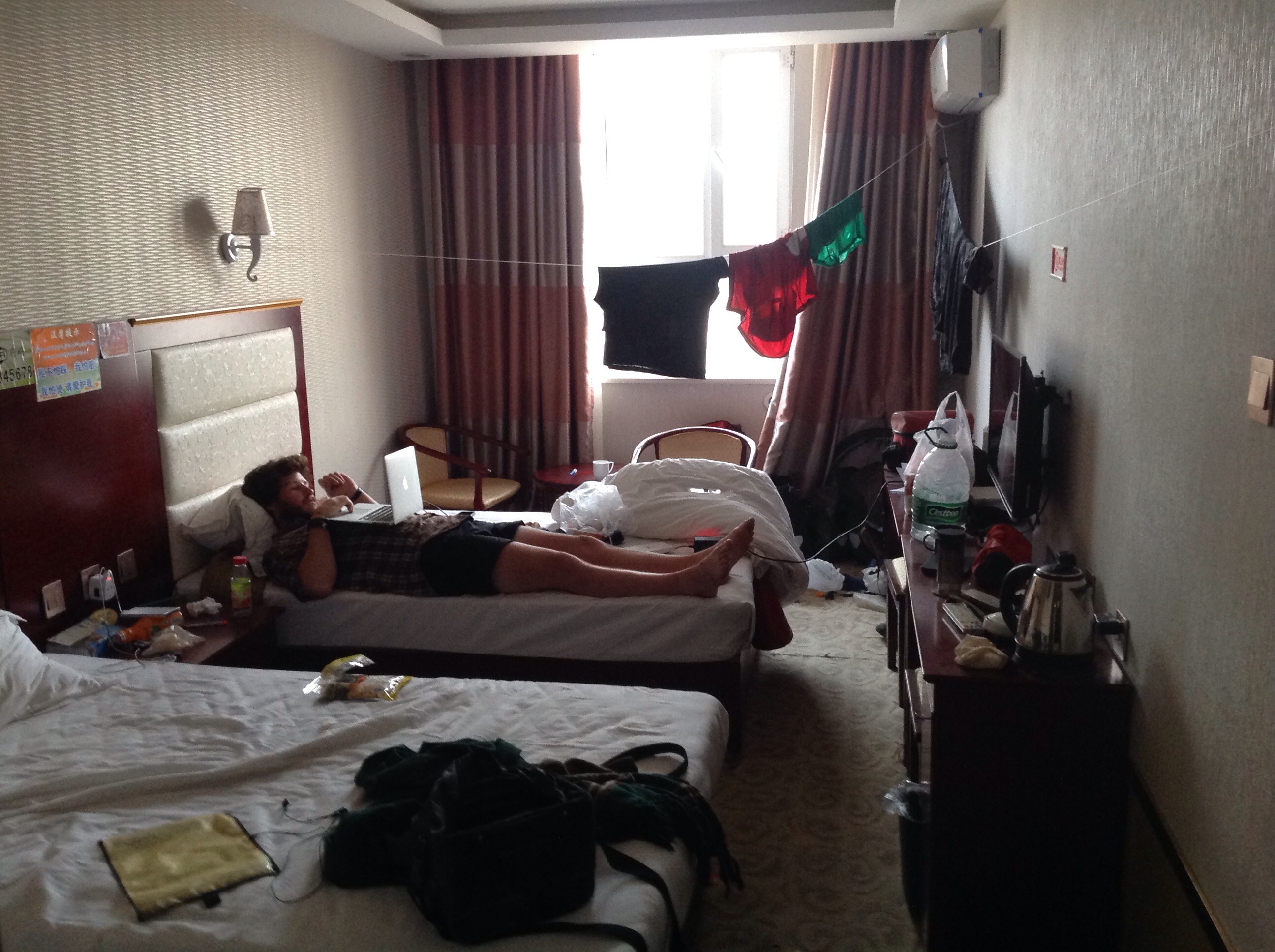