Given the type of cycling we ended up doing today it was good thing we took the rest half day yesterday. We left the hotel around ten, escort in tow as always and began our cycle up the Indus Valley. For most of the day we followed the road the pretty much blasted into the steep rock face which rose and fall as it navigated each spur. 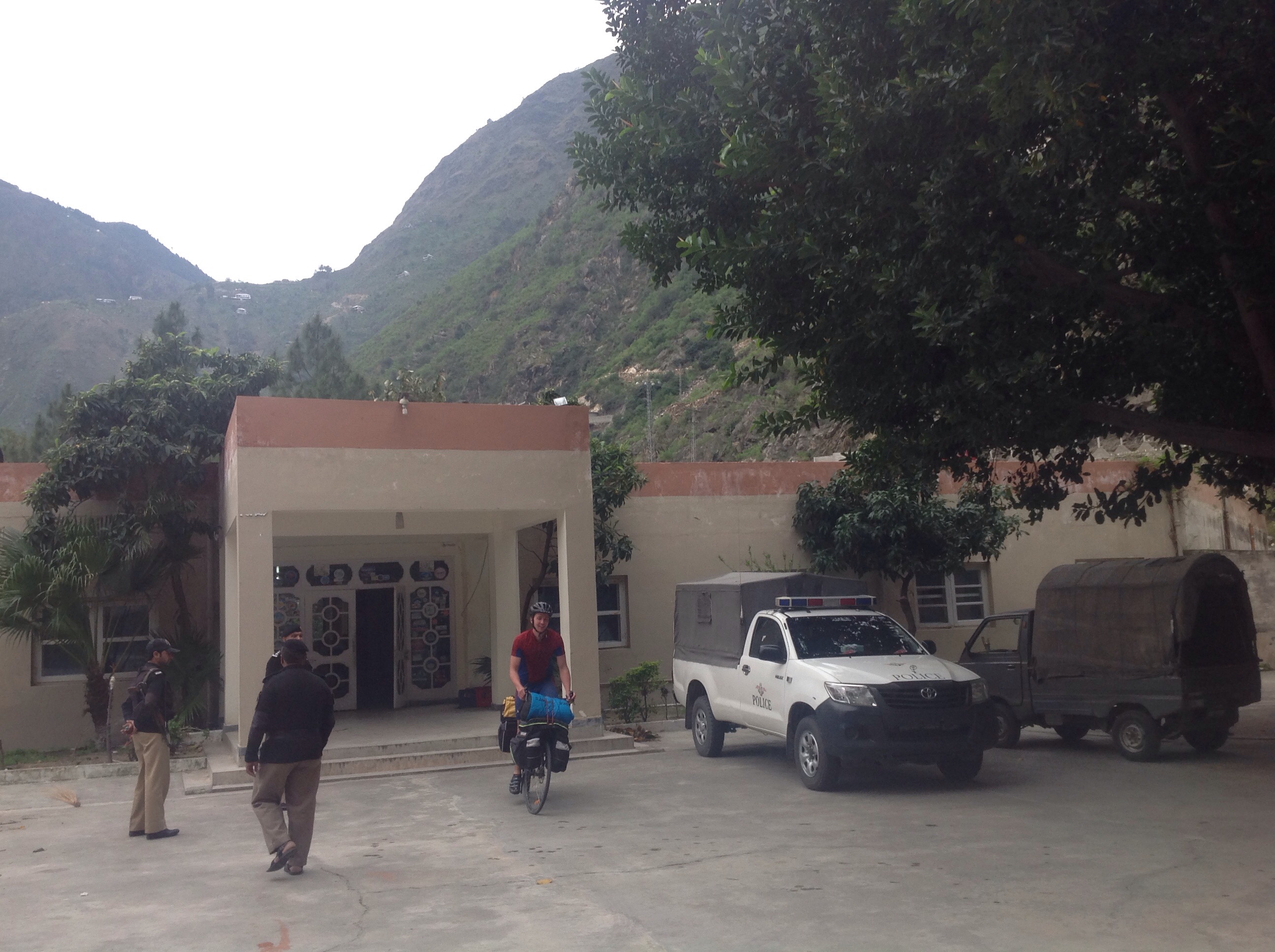 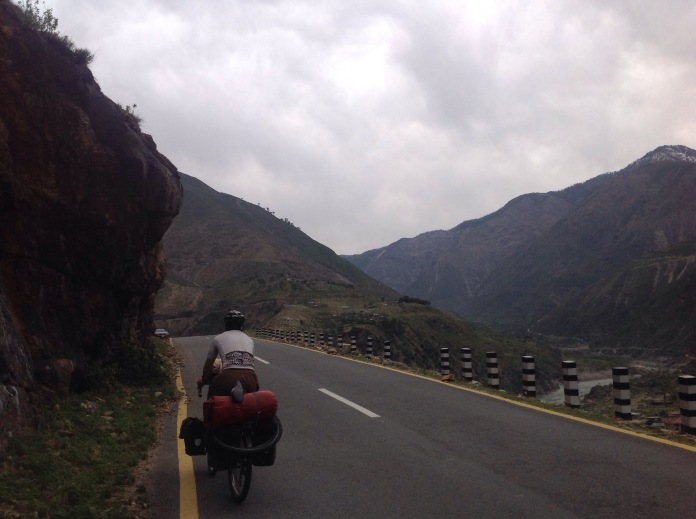 In summer this section can reach sweltering heat as the narrow valley and exposed rock act as big radiators, but today it was overcast threatening rain and the conditions were cool, if not perfect. The road would rise and fall in soon predictable rhythm that made the cycling very relaxing, despite the precariousness of the road. 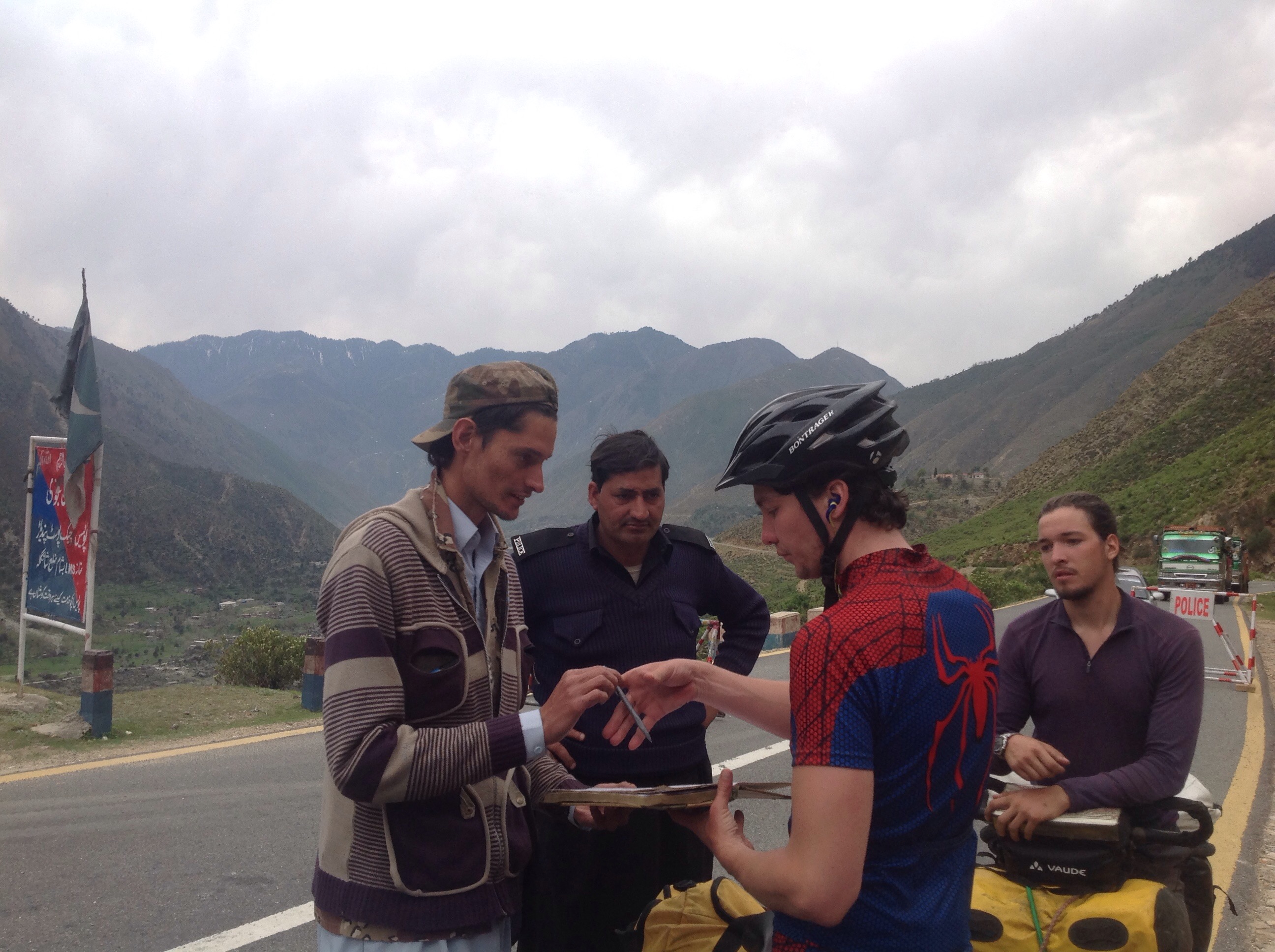 changing escorts, Andre already a bit fed up with it 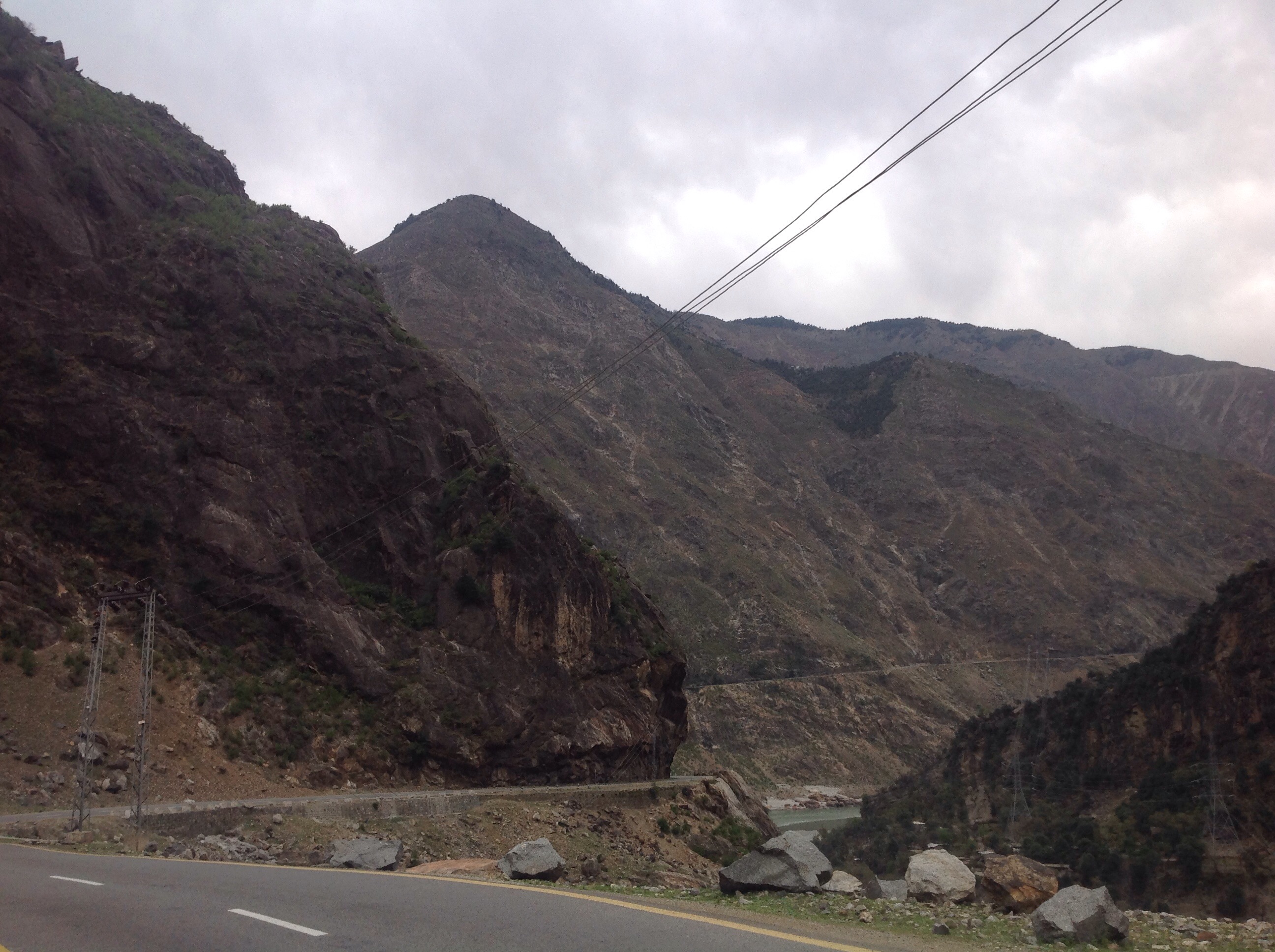 The KKH as ir travels up the Indus, right in the cliff face

Nothing lined the roads here, just the bare rock on one side and a drop down to the Indus on the other. Every now and then the route would sweep way out to the left and down, sometimes for kilometres, as it navigated a gorge cut by a tributary.
One flat tyre change and a noodle break later it was lunchtime. We pulled into a small shack tucked into a bend in the road as the rain started to fall. Our escort changed and was replaced by a rather impatient one who wasn’t much pleased when we ordered more food or when we stopped outside to talk to some cyclists from Islamabad driving up to Gilgit. 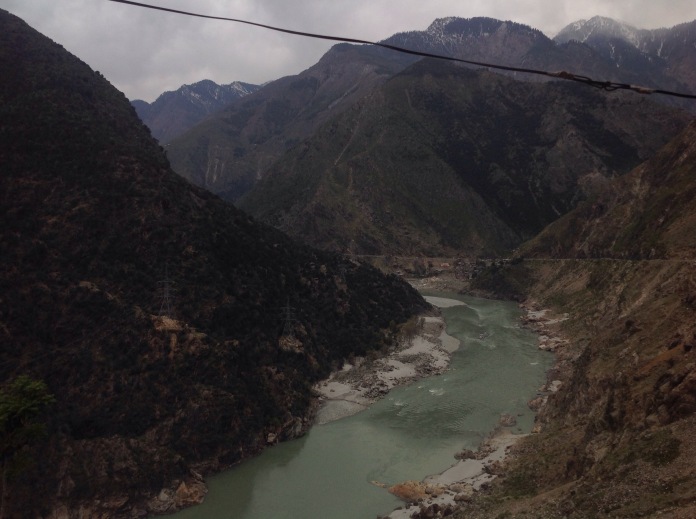 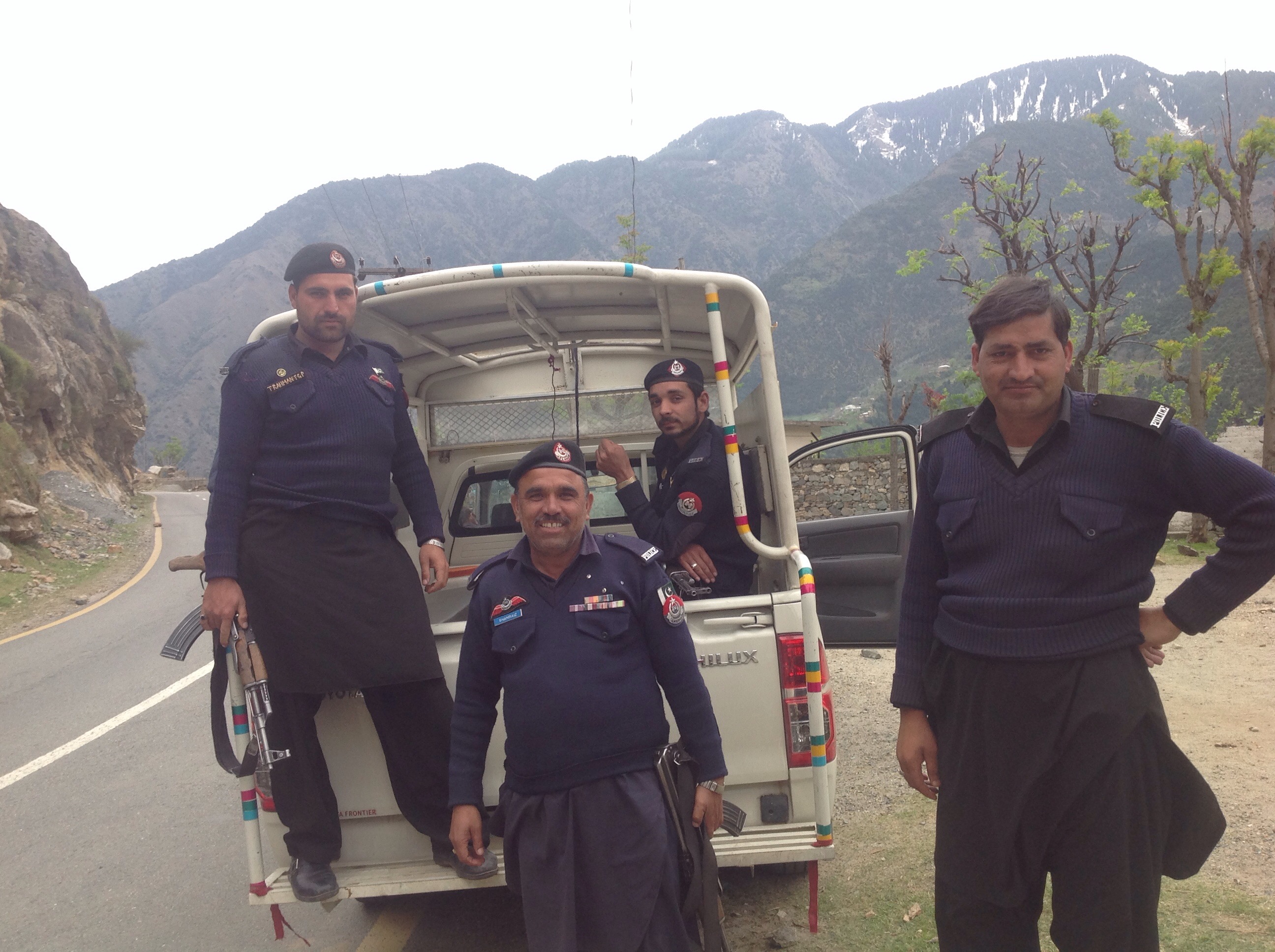 One of our more friendly escorts for the day. They asked for the photo to be taken

The rain continued after lunch but it added to the scenery in a way, making the rock face slick and shiny and the Indus an uncertain haze below. It kept us nice and cool on the climbs refreshed on the descents. So we continued on much the same as after lunch, stopping once to buy some biscuits for after the cycle (accompanied by an impatient ‘go, go!’ from the escort who fortunately changed after that town). As darkness started to creep in we decided to stop to camp, we passed by a police checkpoint with a nice big garden. 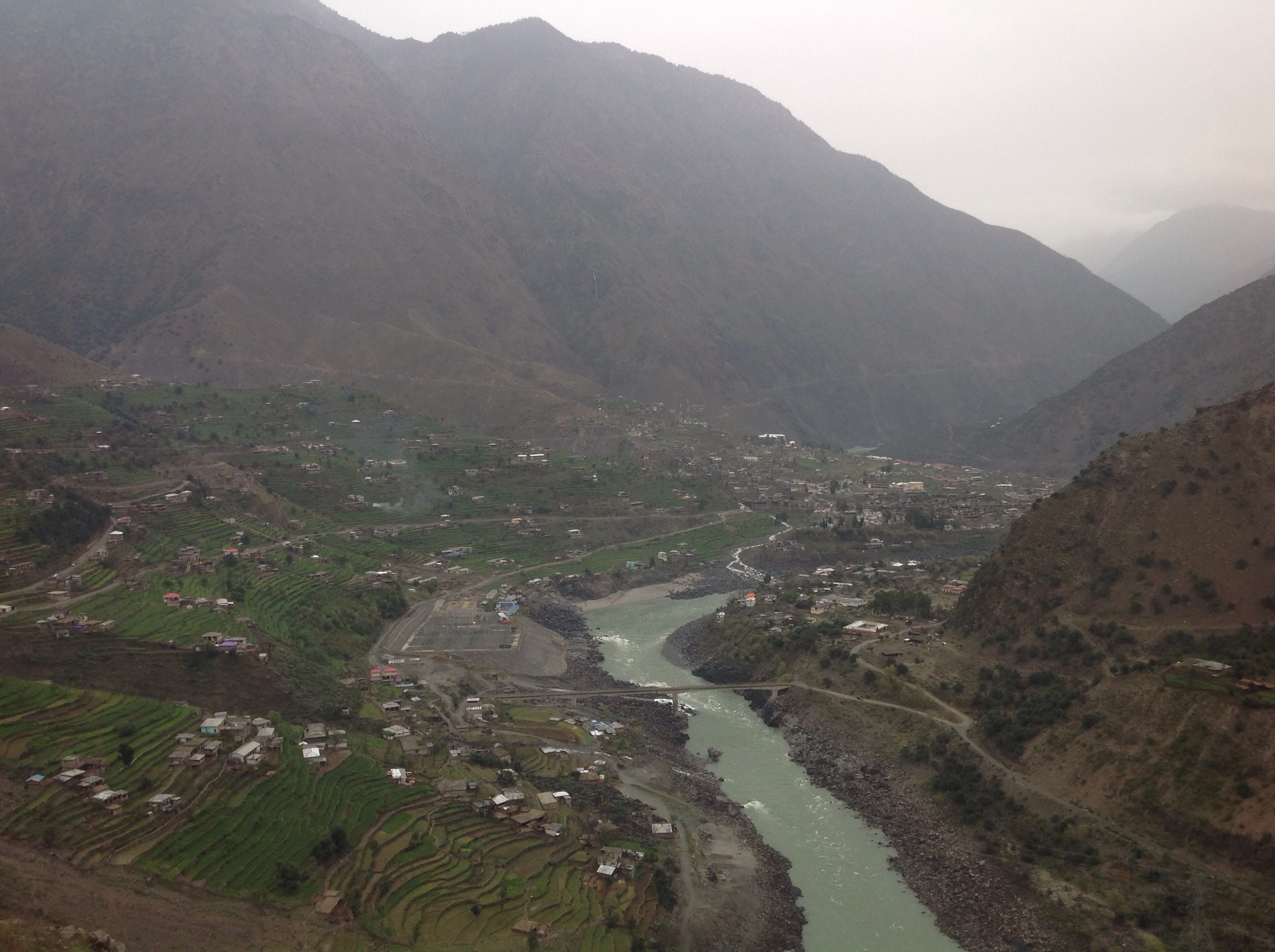 The valley floor seen from the road 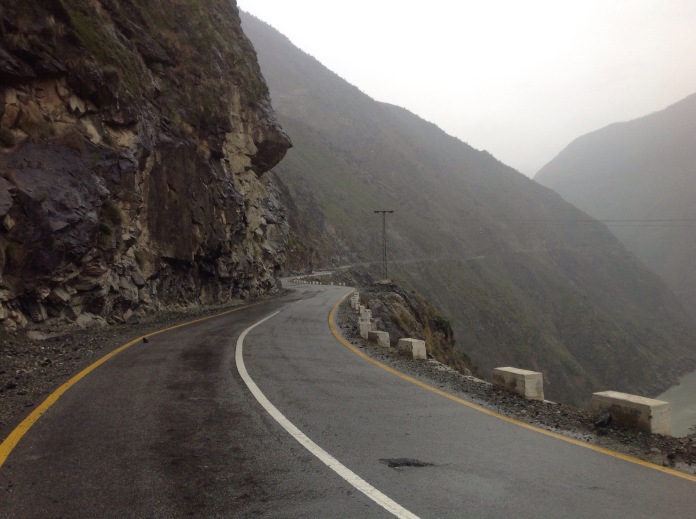 To camp here was an impossible request however, no matter how much we tried to explain that it would be dark before we reached town and riding in the rain on these roads was more dangerous than letting us camp here. The police were determined to get us to the next town and said it was only 10 km away. This was not true. 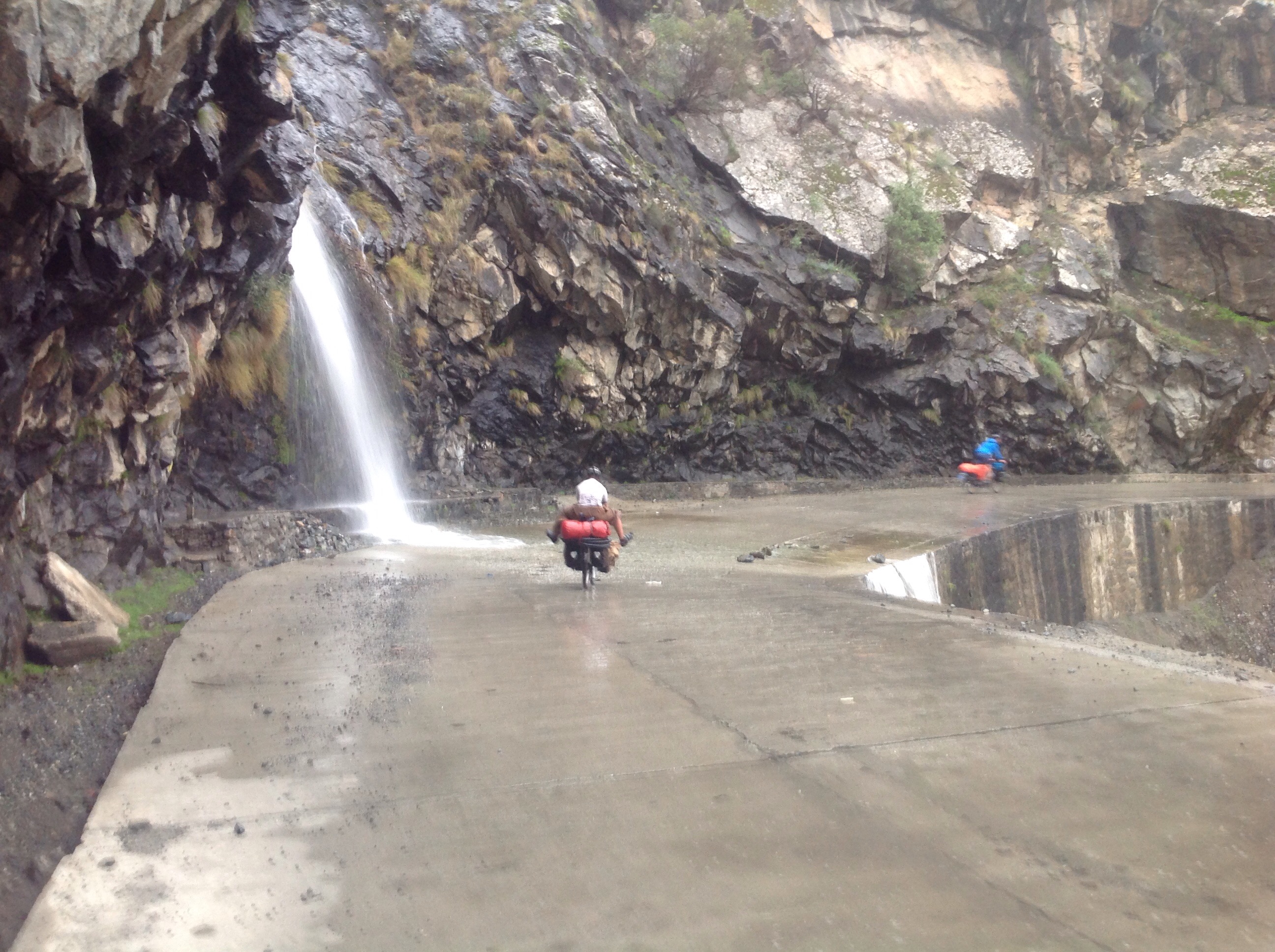 the rain brought these waterfalls which obstructed the road. lifting your feet up was the best way to keep them dry

It was dark and the rain continued to pour down as we entered Dassu nearly an hour later. No streetlights meant navigating the potholed, busy, rain slick road through town was quite difficult. As our requests to camp before town had been denied we left it to the police to find somewhere to stay (the police station in Dassu also being out of the question). This was harder than we thought it would be as the rain was predicted to last five days and many people had come into Dassu town from higher up in the mountain to wait it out an hopefully avoid any landslides or worse.
Eventually we found somewhere with a basic room for four people and after a bit of haggling got what we felt was a decent price. In the end we were happy to be inside as the rain continued and the last push to Dassu kept us on schedule. We drifted off warmed by the thick blankets as the rain pattered on the tin roof.

The accommodation at Dassu