If we thought yesterday’s climbs were steep today would blow that out of the water. In the morning clouds stared to close in as we were breaking camp. A light drizzle accompanied the first hour and a half as we negotiated switchback after switchback. Below us patchwork farms lined the valley floor and a few terraces clung to the sides of the valley, but for the most part trees took up the mountain faces.

The road was very frequently lined with small shops and stalls and houses and passing through them you would always get a friendly ‘Salam Alaikum’. The rain gradually got heavier throughout the morning until we decided to take shelter under the roof of a petrol station and wait for the rain to pass. We stood there for almost an hour as the rain became a deluge and then moved on as it eased off.

We were still climbing, after lunch we arrived at the town of Murree, the first biggest town since Islambad and the end of the first part of the climb. Murree is at 2170m. 1500m higher than Islamabad and only 50km away, so the change in environment was drastic. After Murree we thought that the rest of the cycle would be downhill but only a brief decline before the climbing began again, steeper than before.

The rain came back, only drizzling now which kept us nice and cool on some of the steeper climbs. By evening we passed into a new district of Pakistan, the KPK. This area used to be known as the Northwest Frontier and can be difficult for foreigners to travel through with police sometimes forcing them to get busses. As we passed through the first checkpoint the guard, with a completely unconvincing grin on his face, old us we needed to pay 100 rupees to enter the KPK. What with his grin and his friend snickering behind him it was clear this was blatantly untrue and we moved in after putting up a token fight.
Right after this checkpoint was a series of steep switchbacks and at the end of the day these took the last of our energy. Looking around for somewhere to camp we saw how little flat ground thee was. We had to cycle along a little bit further until we got to a small shack that served food with a flat area beside it for cars and seating. We asked the owner to camp and he said ok.

A nice white car pulled up and the occupants started talking to us. In fact the first thing they did was hand over a wallet with an ID card in it. This was to prove that one of them was indeed who he claimed to be – the mayor of Mansehra, the next town north of Abottabad. He talked with us for a while and then presented us with his card, and invitation to lunch and half a bottle of whiskey before speeding off.
We had camp set up and darkness had fallen when a truck pulled up into the campsite, blasting us with its high beams. A policeman got out and came over to talk. He wanted us to move to a hotel for no particular reason. As usual he pulled out the ‘security issues’ line, a phrase they use pretty much everywhere here to scare you into doing what they want without having to come up with any concrete reason. This time when we pressed him for why we had to abandon our camp in the night he said something about wolves which confirmed there was nor real reason and all he wanted was for us to stay in a hotel, as most police desire. 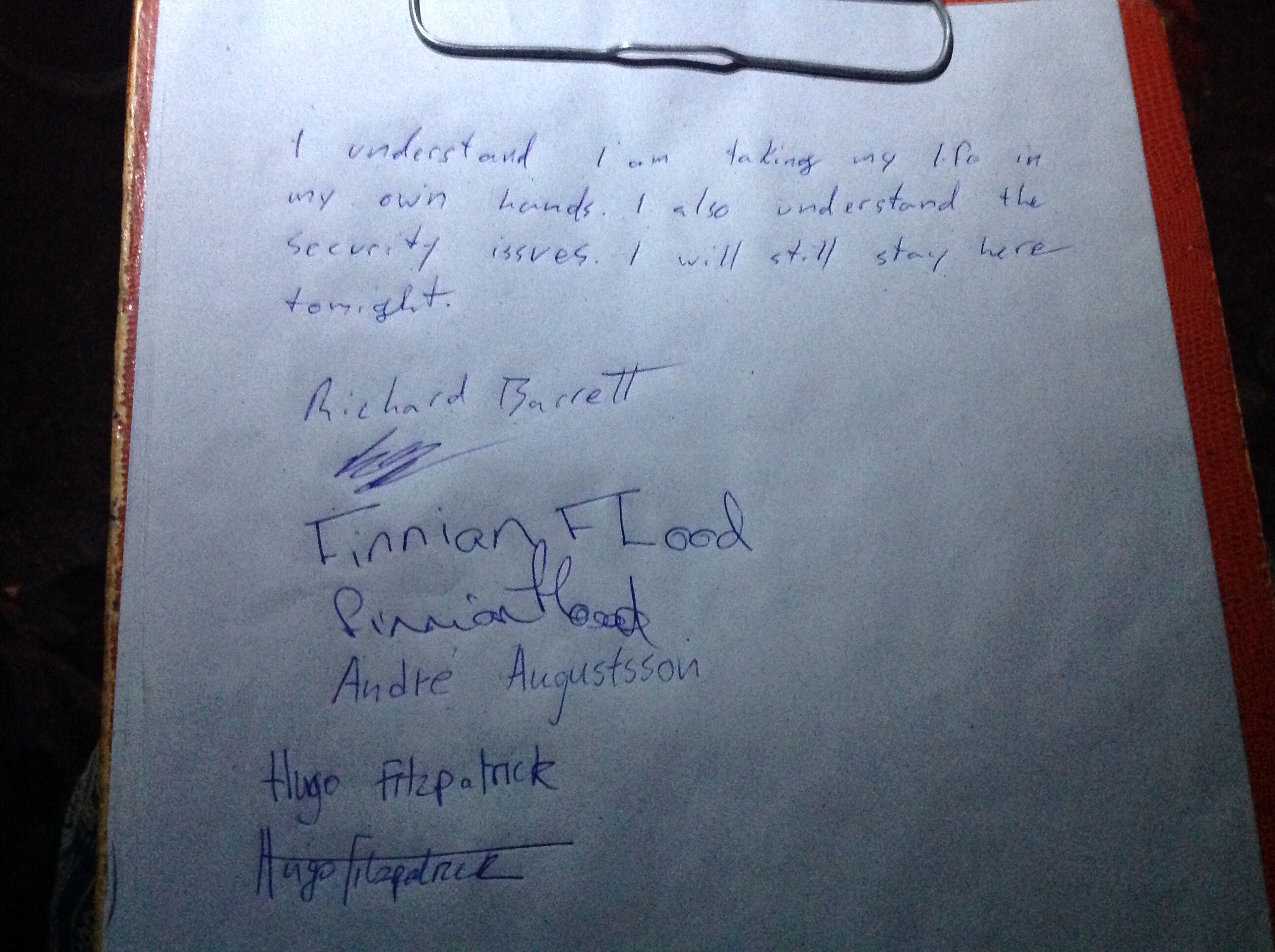 The contract penned by us absolving the police of responsibility

A bit of a stand off occurred, we weren’t going to leave our camp or take it down in the dark so in the end we wrote out a little contract taking responsibility for our safety and relieving it from him, which seemed to do the trick. He left and we settled down to our omelet dinner and contraband whiskey under the a starry mountain sky.

sunset over the foothills