André and I spent almost three weeks in Islamabad trying to get our visas in order. Our long stay was made all the easier by one of the most hospitable and amicable Couchsurfing hosts I’ve ever stayed with, a Dutch fellow named Frank. Frank let us crash at his place the whole time, along with a German couple who were also waiting on visas so at times he was pretty much running a small hostel. I can’t thank him enough for his warm welcome in Islamabad, it would have made dealing with all the bureaucracy of Pakistan and China a big hassle.
I know that we spent ages online trying to find out info about applying for a Chinese visa in Islamabad so I’ll pay it forward now. So, boring visa information below, you can skip this if you just want to read about the trip.
Getting a Chinese visa in Islamabad

Getting a Chinese visa on the road can be frustrating as every embassy seems to follow different rules. We tried in Tehran and they wouldn’t give us enough time to enter. In Islamabad we got 90 days to enter and 60 days in China, extendable. I don’t think at this time the Pakistan embassy can or want to issue visas longer than 60 days to foreigners.

That huge white building on the right is the Chinese Embassy

To get the visa, these are the documents they will ask you to bring

The application form, of course.
A letter of invitation. For Pakistanis applying the embassy is pretty strict about original copy and stamps and seals. They were really lax with us though, our letter was a photocopy with only a little bit of information. They only want you to show them that you have some contact in China, so a letter from someone on Couchsurfing or Warmshowers say thing they are you’re friend would be enough.
A list of hotel address. This one is really a token gesture. You CAN use booking.com, they accept it so we just booked a bunch of places along our general itinerary for free and with free cancellation. Even if you book for 90 days, which we did, they will still only give you 60.
A bank statement. You have to show them that you have $2000. You can bring cash too, apparently.

Copies of your passport
That’s all. Then you have to get there. In Islamabad all embassies are in a diplomatic enclave. Most vehicles aren’t allowed in. There is a shuttle bus service from one end of the enclave that goes to all the embassies. It’s actually quite far out of the city by the time you get to the shuttle depo, a taxi is the best option.

You must get on the shuttle bus, even though the Chinese embassy is only 100m away from the depo. The embassy security won’t let you in unless you have a shuttle ticket. Ticket price 200RS
The visa costs 4000RS, pay in cash at the embassy when you pick it up. We applied on Tuesday and got the visa on Friday. Show up early, queues can take up to an hour to get into the embassy.
Extending your Pakistan visa in Islamabad.

This is actually a relatively painless process, it just takes a long time as you have to go to two different offices.

We extended our one month visa by two months and two other travellers staying with our host extended their three month visa by a further two months and got an additional entry so the government seems generous enough with extensions.
First, visit the Ministry of the Interior with a copy of your passport and Pakistan visa page with the extension form. To the left of the main entrance of the ministry there is a carpark and some shops at the other end. There is s man there who has all the extension forms and can fill them out for you and photocopy for 100RS.

The visa extension office is only open from 11 – 12 and while we were there the official didn’t arrive until 11:40. The official looks at the application then writes a letter saying you can apply for the extension for the time requested.
Then you need to go to the passport office in G8. They are open from 8 – 12. Bring photos, copy of passport and visa page and some proof of address of where you are staying in Islamabad. Here you fill out another visa application form, then show it to the boss in the office who approves it. Then bring it to a clerk who stamps it and give you a pick up form.
The first date they will give you is three weeks from the day, so make a fuss and you’ll be directed back to the office and you can shorten the wait time. We only had a one week wait in the end, the other travellers only had to wait three days.
End of visa information!
In the words of Frank, Islamabad is not Pakistan. The city is way more organised than anywhere else in the country, first from its layout: a block system, where each block contains all the residents need in a central market. Second, the big new traffic free expressways that define the block, and finally all the restrictions put on the traffic that can even enter the city so that the nice new capital isn’t ruined. Auto rickshaws aren’t aloud, neither are big trucks or overloaded cars – pretty much the majority of traffic in Pakistan.

The view of the Franks blocks market place

There isn’t a whole lot to see in the city, Frank took us to a lot of the main sights on his days off and even on a weekend back down to Lahore. With all the time we spent waiting for the visas to be processed it was great to have a few distractions while we waited. The western luxuries of his apartment compound were also a nice break, especially in the first few days while I was still sick.
It’s hard to find a decent bike mechanic in Islamabad but one of Franks friends is a huge bike nut and through many trips abroad created a a pretty high quality workshop in his garage complete with Park Tool tools and Shimano components. I was looking to replace my drivetrain after Finn brought back new chainrings and cassette from Dublin, and with the help of Franks friend and his tools we replaced the whole thing the day before starting cycling again. If you’re on tour and in desperate need of a decent mechanic or workshop look up Frank on Warmshowers or Couchsurfing and let him know. 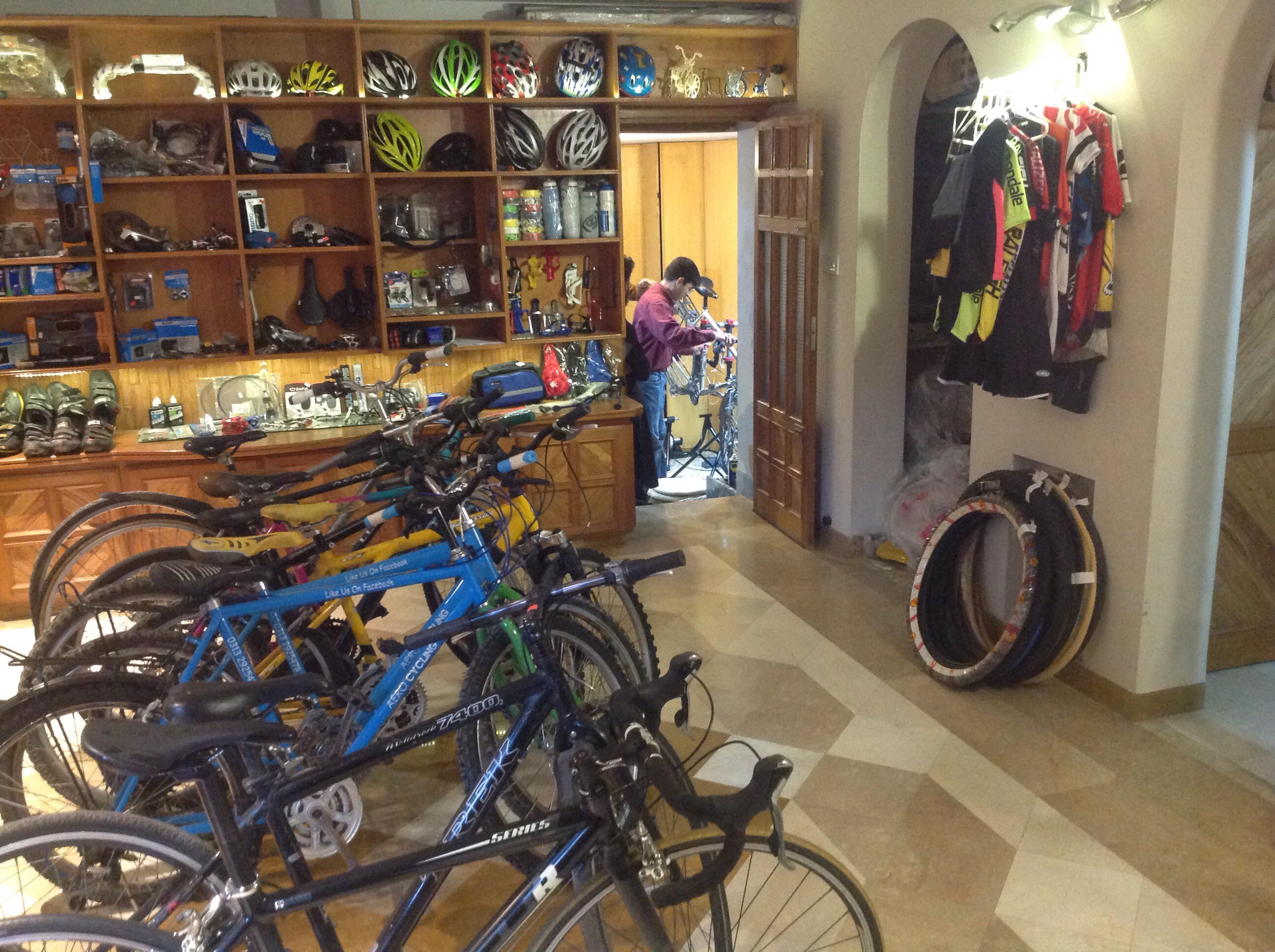 We had our last two nights in Islamabd with six of us, the four people of our cycling group and the two German travellers, Andy and Lisa hanging out, talking about our trips and where we were heading in the future in Franks place. Actually including Frank it was seven. We spent a long time in the city but it left us well rested for the next big leg of our journey, cycling up over the Karakorum Highway and into Kashgar.