The checkpoint on the Iran side of the border was a fancy purpose built building with office and security screening and everything. On the Pakistan side there was a small one room hut where our visas were processed. This contrast framed the Pakistan experience perfectly.

Everyone we dealt with was really friendly, the checkpoint guards, the passport bureaucrats even the money changing scalpers were friendly in their attempt to give us a poor exchange.
Once we had gone through passport control we were led to another hut where the army took our information and after that to the levies station. The levies are the law enforcement group in Balochistan, they are a paramilitary force that have jurisdiction over most of the provincial areas of Balochistan set up during the time if the British Raj.
In the past tourists could take the bus from The border town Taftan to the first big city Quetta but in recent years ‘security issues’ has meant that now the levies drive every tourist that comes through from station to station the 800km to Quetta. All this was explained to us while we waited in the station by one of the station workers. We also had an interview with a rather stern bearded man about our route through Pakistan who advised us on where we should and shouldn’t go. 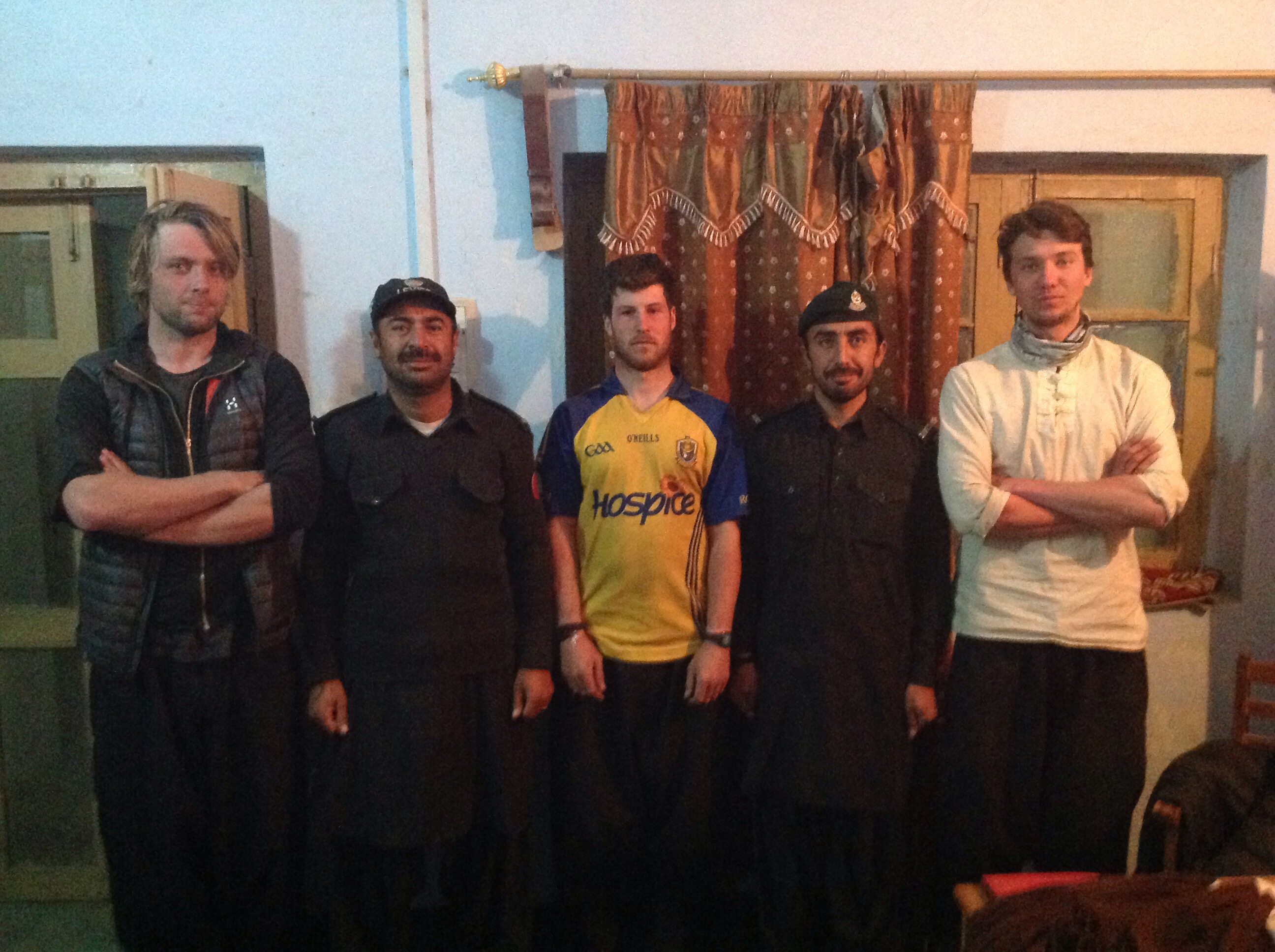 with the levies in the Taftan station

We had to wait for the rest of the day in the levies station, we passed the time playing cards which was quite a relaxing way to pass the time, except when the levies dragged some guys into the station, beat them and jailed them explains that it was because they were ‘disrespecting the uniform’ as if it was the most natural thing in the world. We were really in the Wild West of Pakistan now.
A bit later in the day we were in for a big surprise. Another tourist arrived at the station, and he was a bicycle tourist too!
This was André Augustusson, a young guy from Sweden on a round the world tour. Through some fantastic coincidence he happened to leave Iran the same day as us. We spent the rest of the evening talking about bike touring, what our route was, people we’d both encountered, it was really nice.
We also talked to the assistant commissioner of the levies for some time, he was a well spoken guy who liked to practice his English when the tourists came through and was very proud of the levies and his position. He brought his brothers over later that night and we talked to them too, very friendly guys eager to talk to tourists like us.
The next day we loaded up our bikes and all our luggage, four persons worth, in the back of one pick up truck and sat in the back with it all. This would be the first of many times we did this over the next two days as we travelled from levies station to levies station changing trucks at every stop. 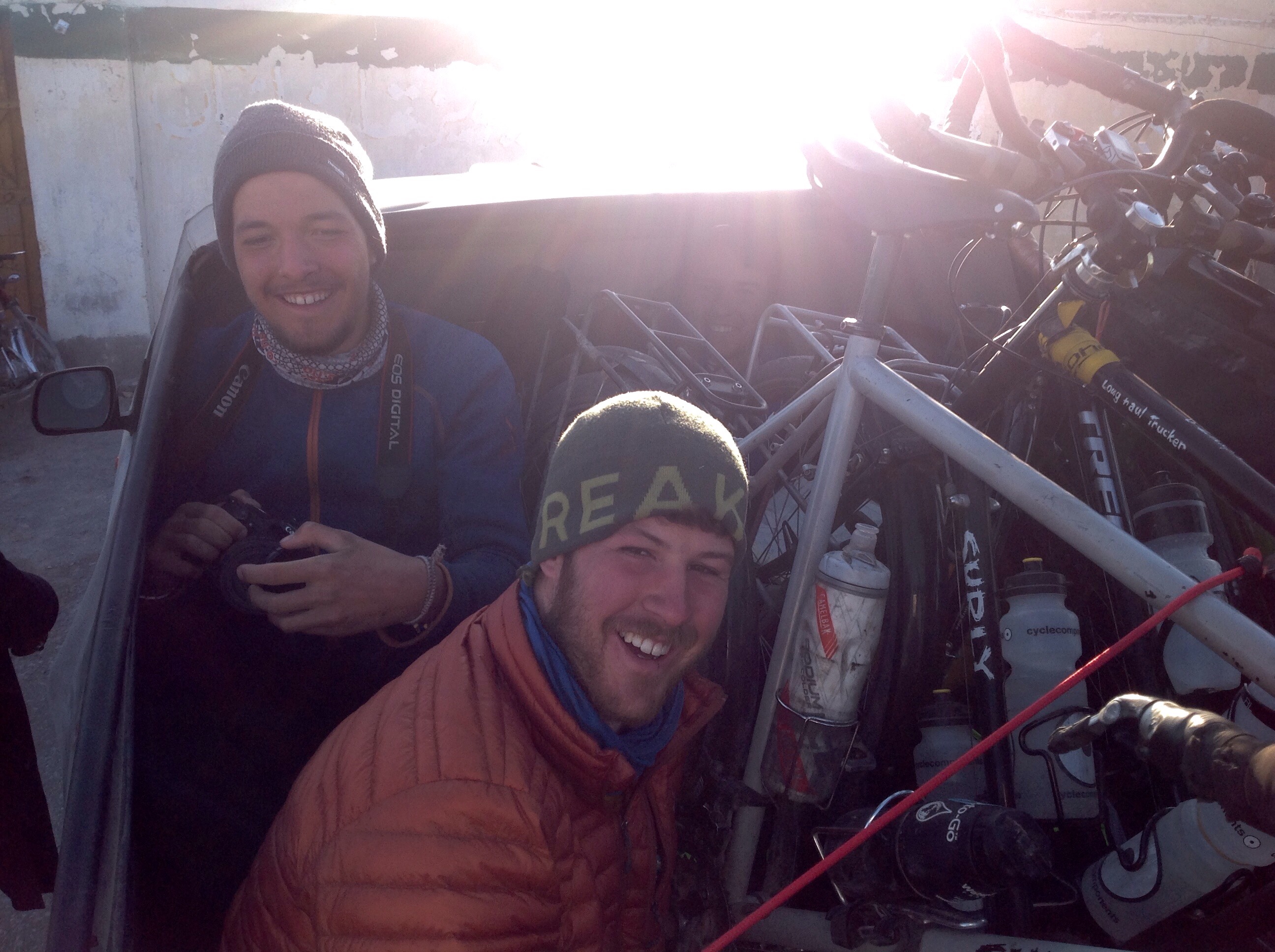 André and Finn in the first escort truck. see if you can find Richie

We left Taftan behind and drove out across the desert. There were frequent checkpoints where we had to sign in with our passports info but that was the only delay. In general we sped across the desert. Two hours later we swapped trucks at a small village and continued on the same as before. 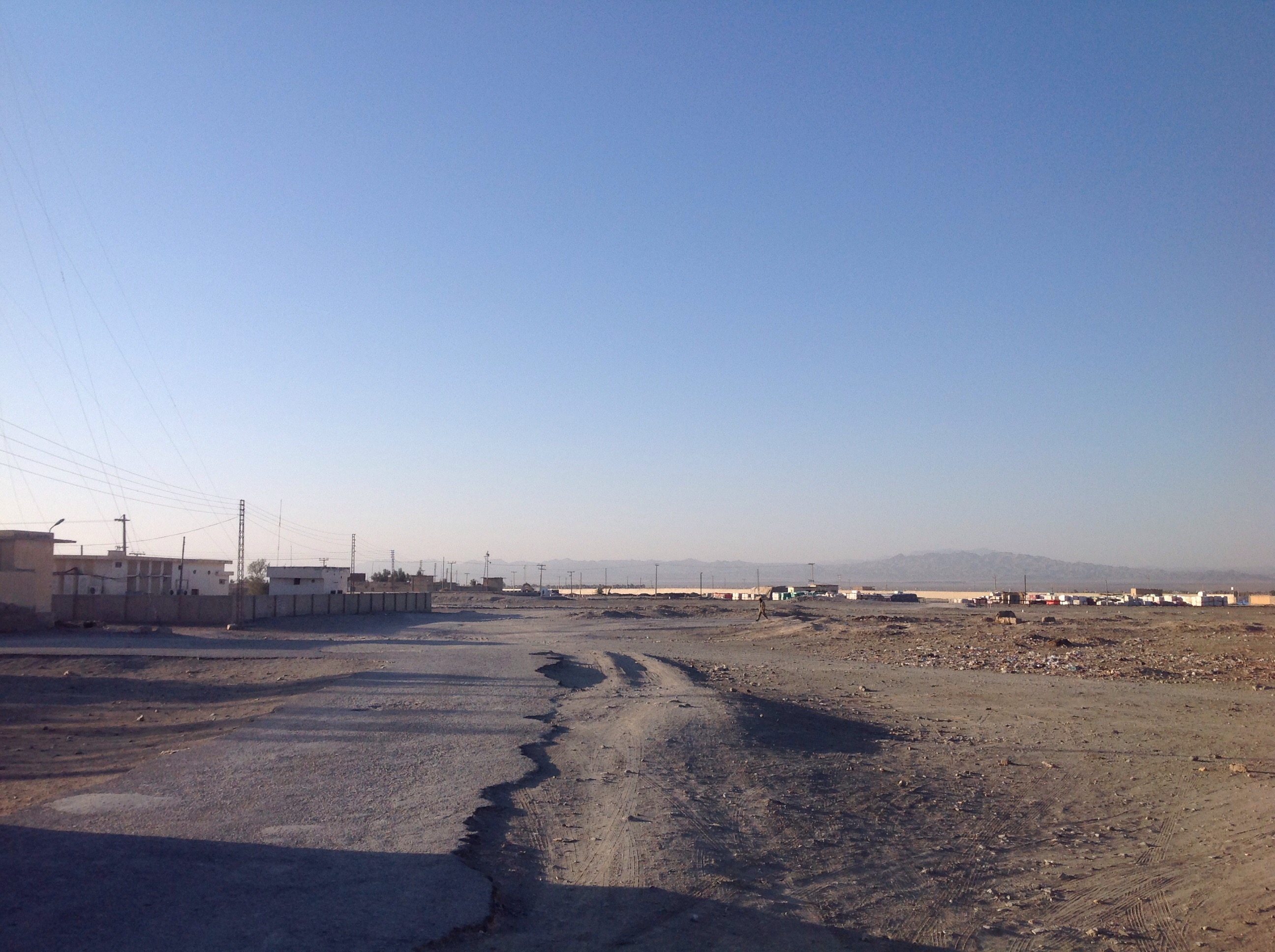 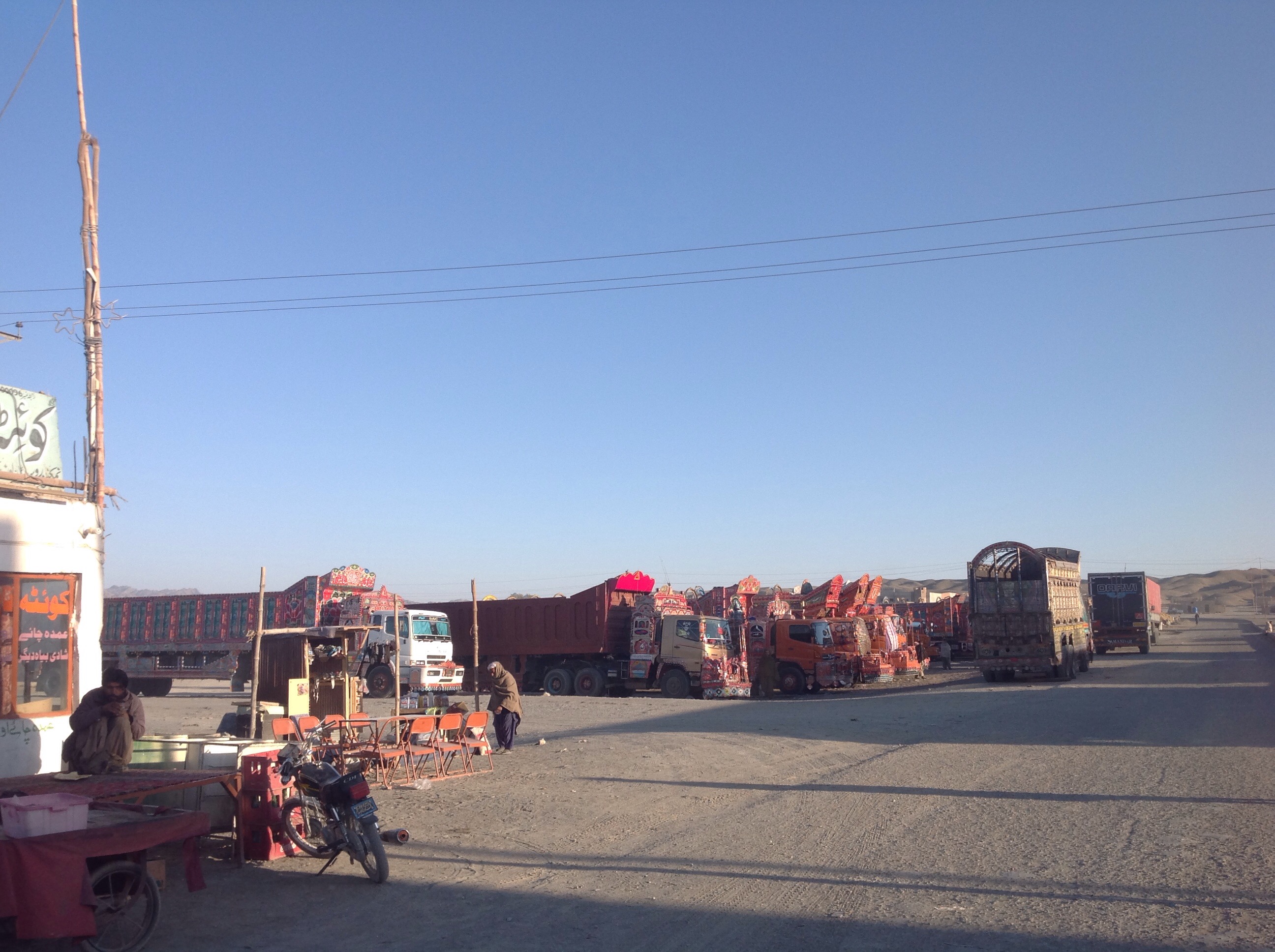 almost all the trucks in Pakistan are decorated like this

At the third stop of the day we had lunch in the levies station as we waited for the next truck to arrive. After an hour the final truck arrived, we loaded up and drove on the last 80km to Dalbandin where we would spend the first night. 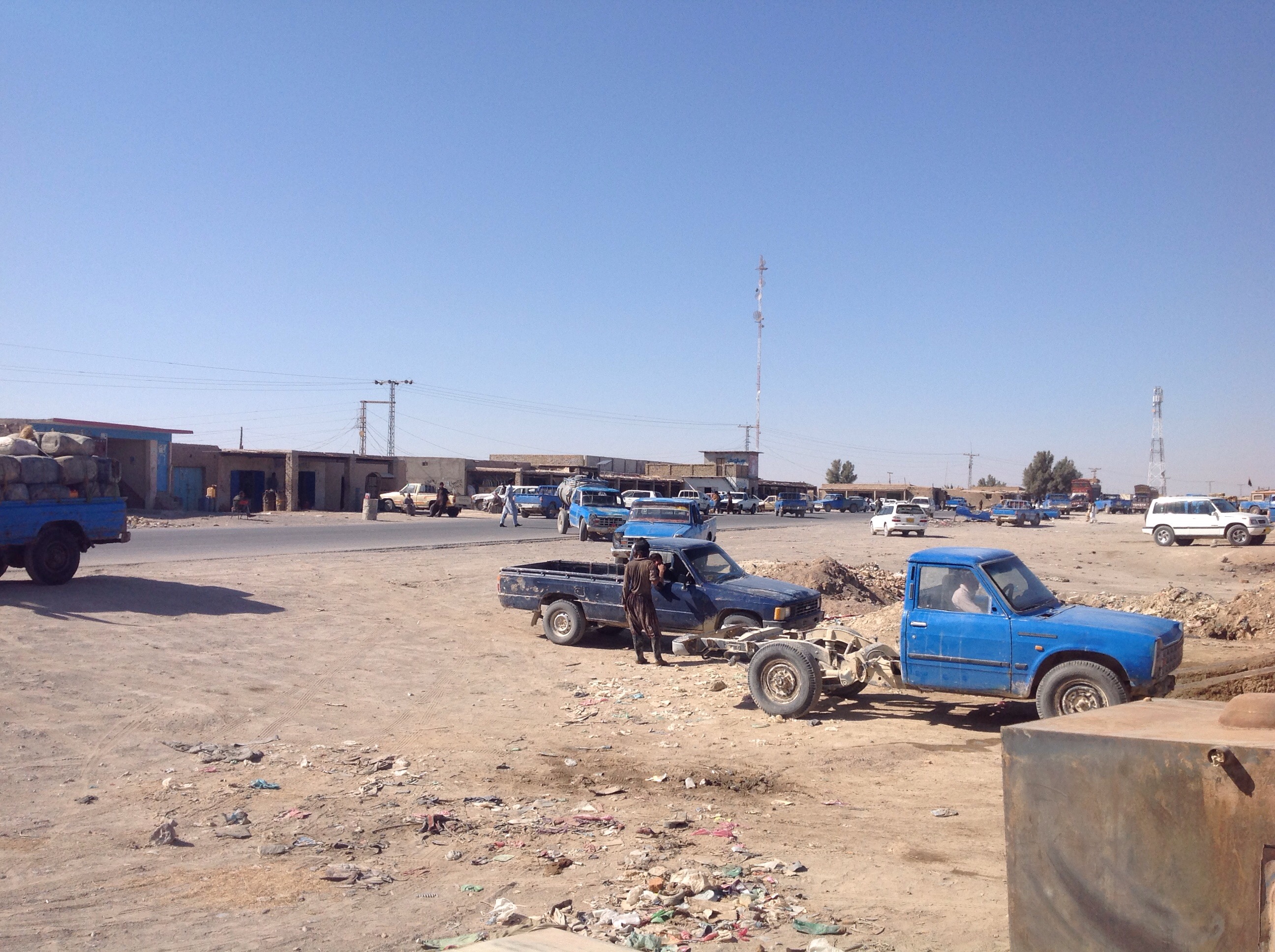 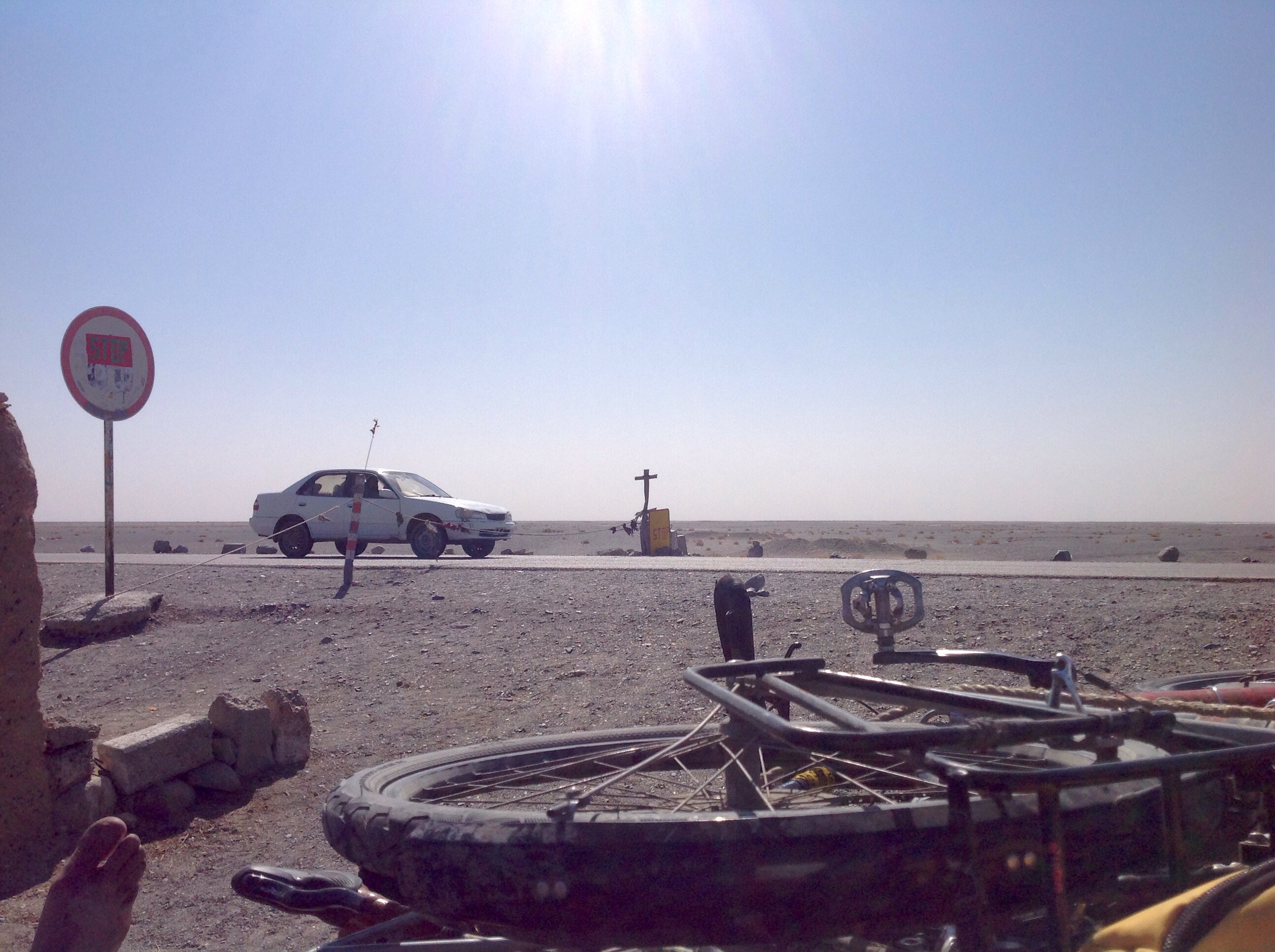 One of many checkpoints along the road 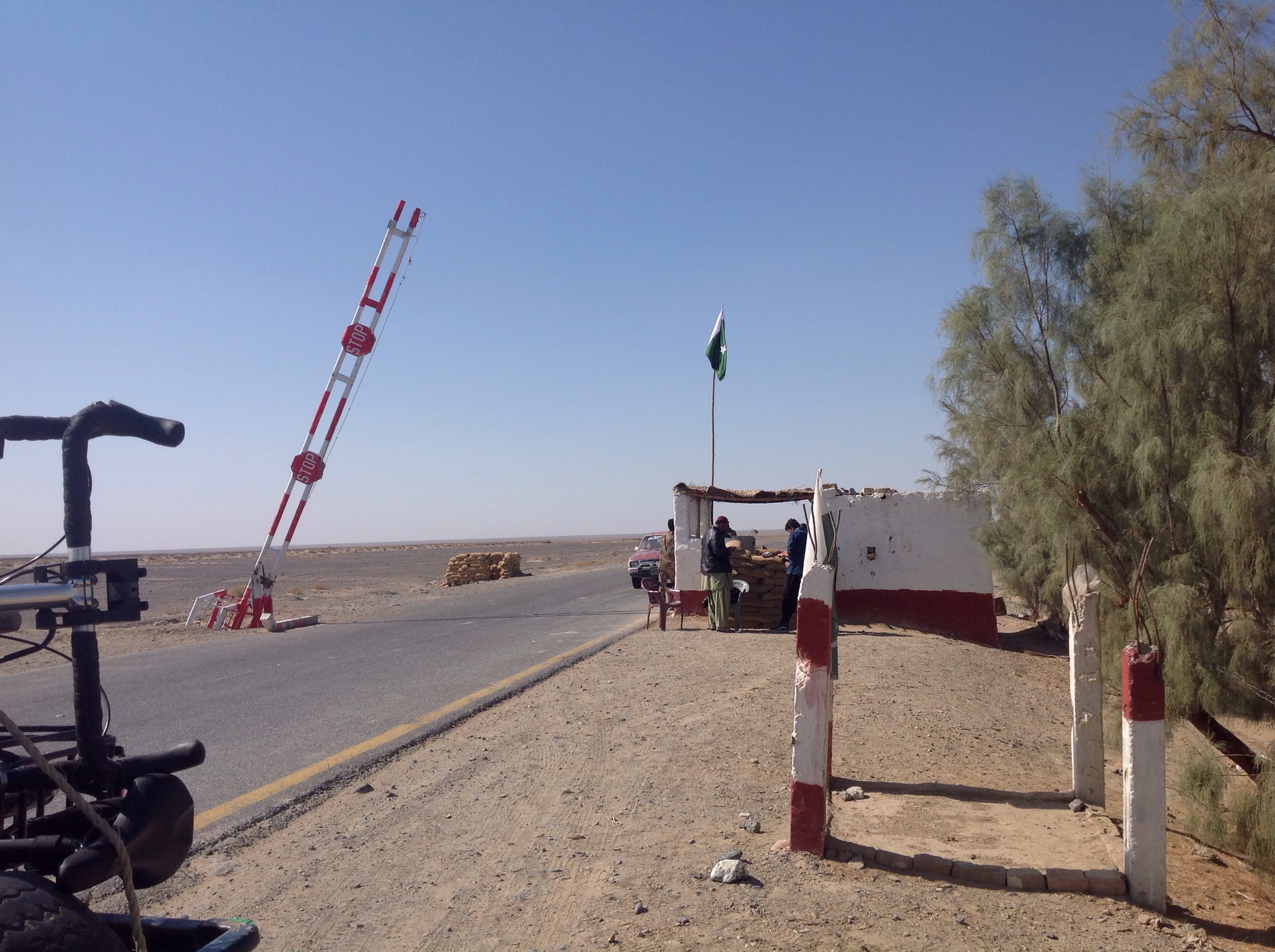 lunch in the levies station

We didn’t stay in the levies station here, we were brought to the Dawood hotel where, after a bit of bargaining got two rooms for 500PKR (about €4.50) each. Here though we met the Dalbandin levies captain who proved to be a bit difficult to work with.
He didn’t want to load our four bikes and luggage in the back of his new pick up. He made all sorts of excuses, that he needed the room for his men that he didn’t have time tomorrow, all sorts of nonsense, and then said we had to hire a truck to drive us to Quetta tomorrow for €70. 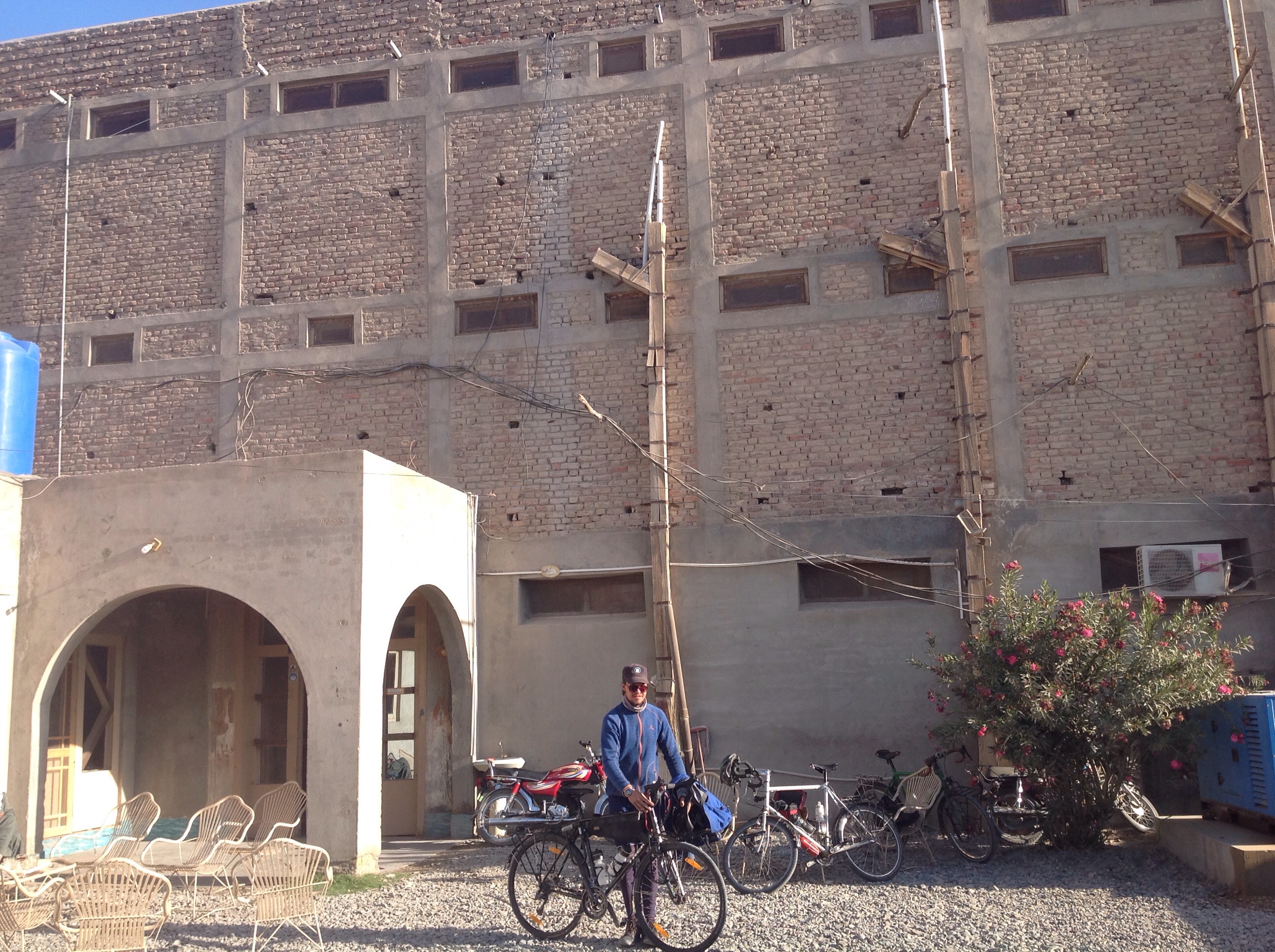 André outside the Dawood hotel in Dalbandin

We were all pretty sure he was supposed to take us in his truck, and no way we were shelling out €70 so we told him ‘fine, if you don’t won’t to drive us we’ll cycle and you can follow’. Clearly not pleased we had called his bluff he made up some excuse and said he couldn’t take us until the day after tomorrow. I don’t know what we would have done if we hadn’t made friends with the assistant commissioner the day before but we did and we got his number too, so we called him us and explained that the levies chief here was not being cooperative.
After a short phone conversation the chief came back and told us he’d be here tomorrow morning to escort us while we cycled. Problem solved. And we were pretty sure he wouldn’t have the patience to drive slowly behind us as we pedalled and would just load the bikes up in the end anyway.
We spent and enjoyable night in the hotel and the next day we were proven right. We were all ready to cycle when the chief pulled up and told us to load up the bikes. 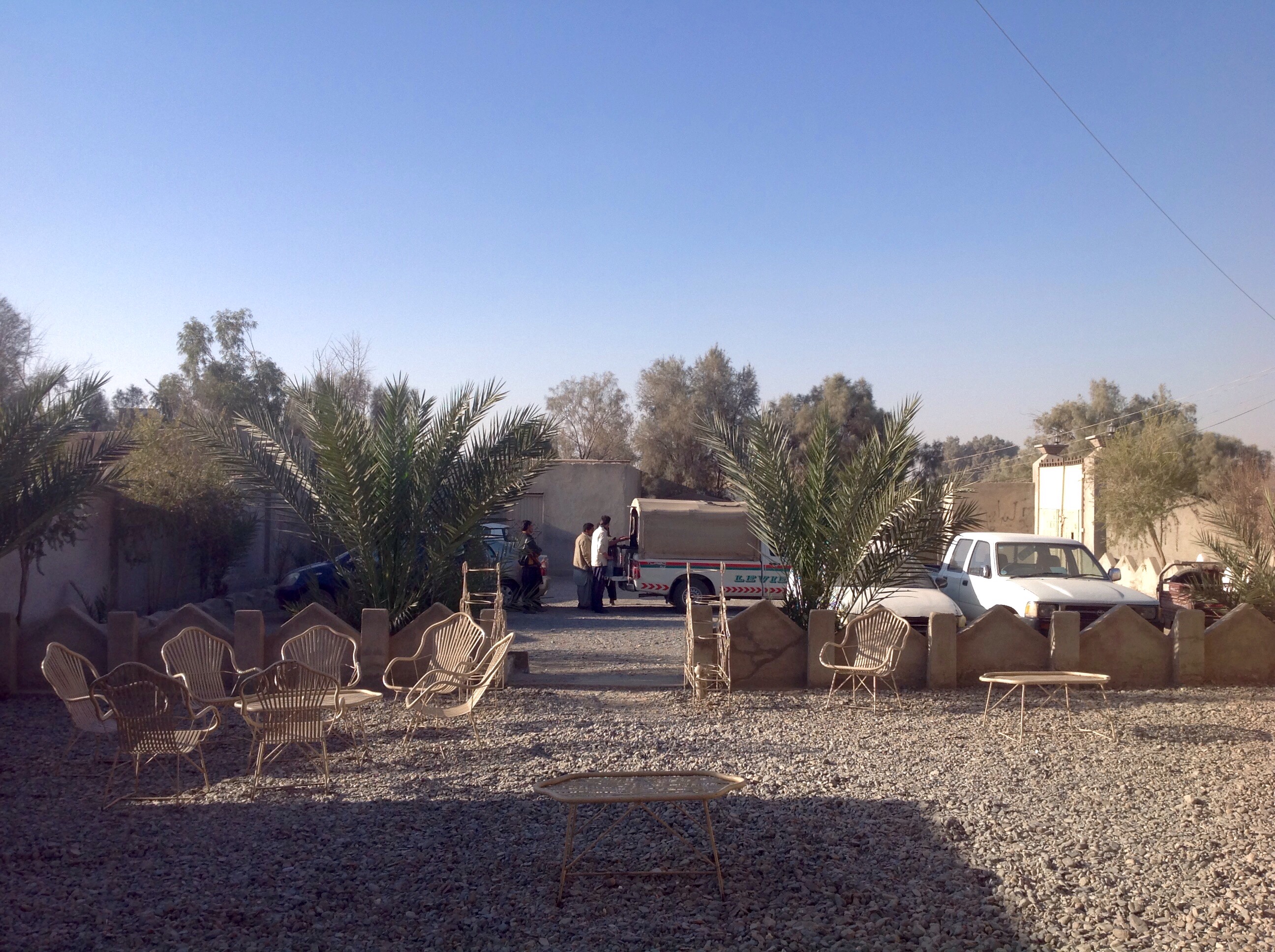 What followed was a long day of load and unloading the bikes as we arrived and left the various levies station. Sometime we would only drive for twenty minutes before we had to change escorts. But everyone was friendly and for the most part easy going. 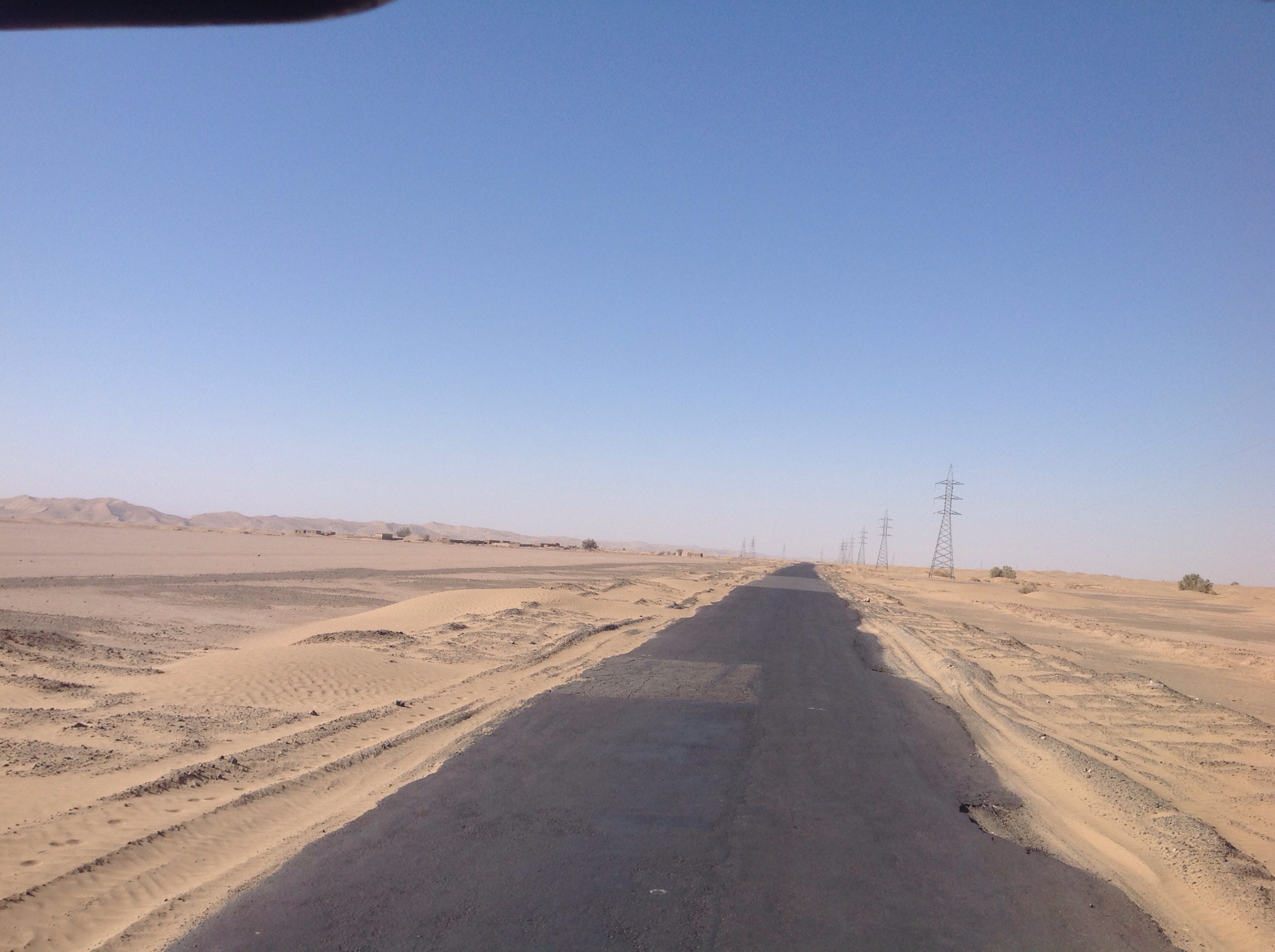 Now this is desert 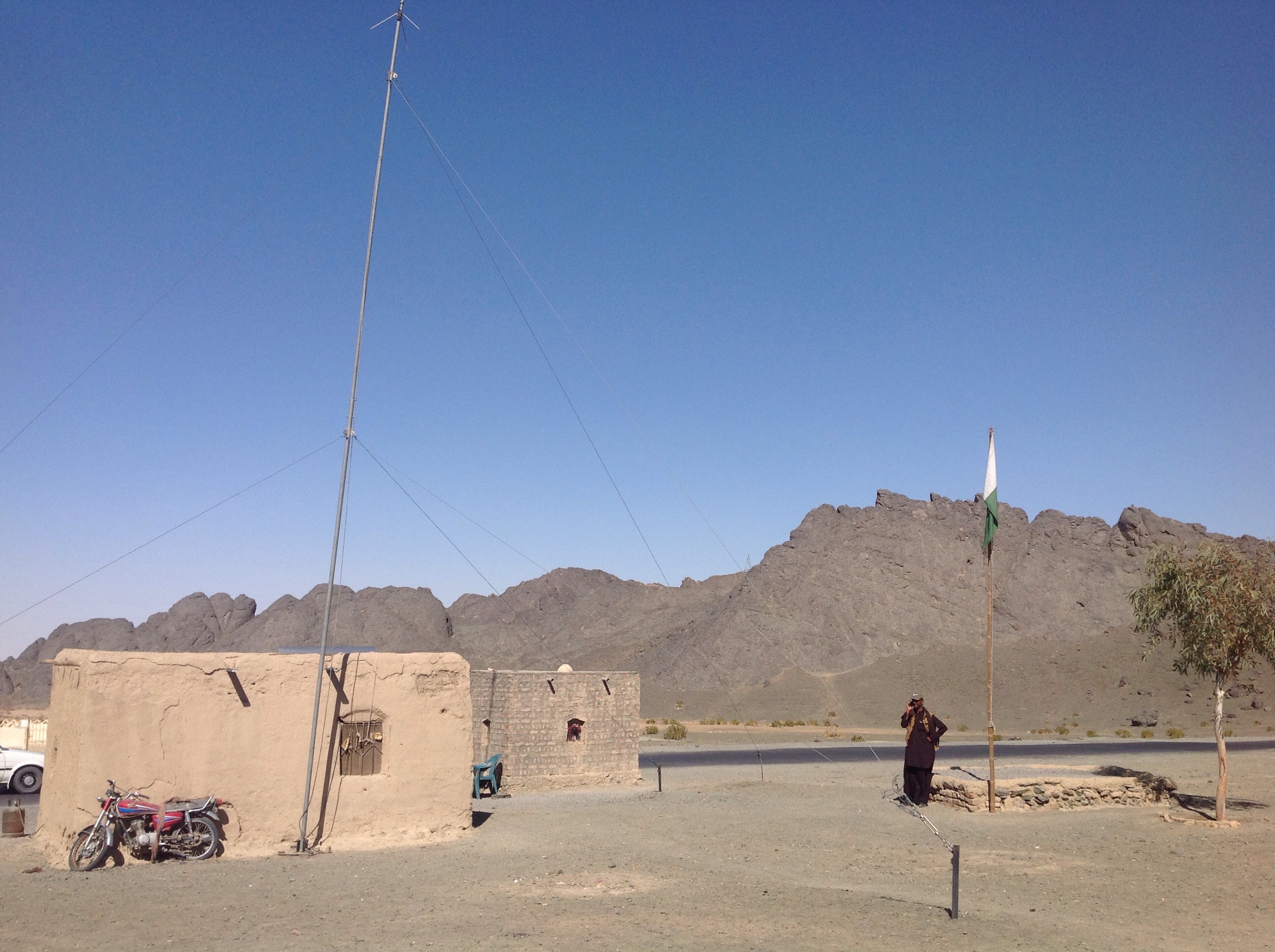 swapping trucks at the first of many checkpoints today 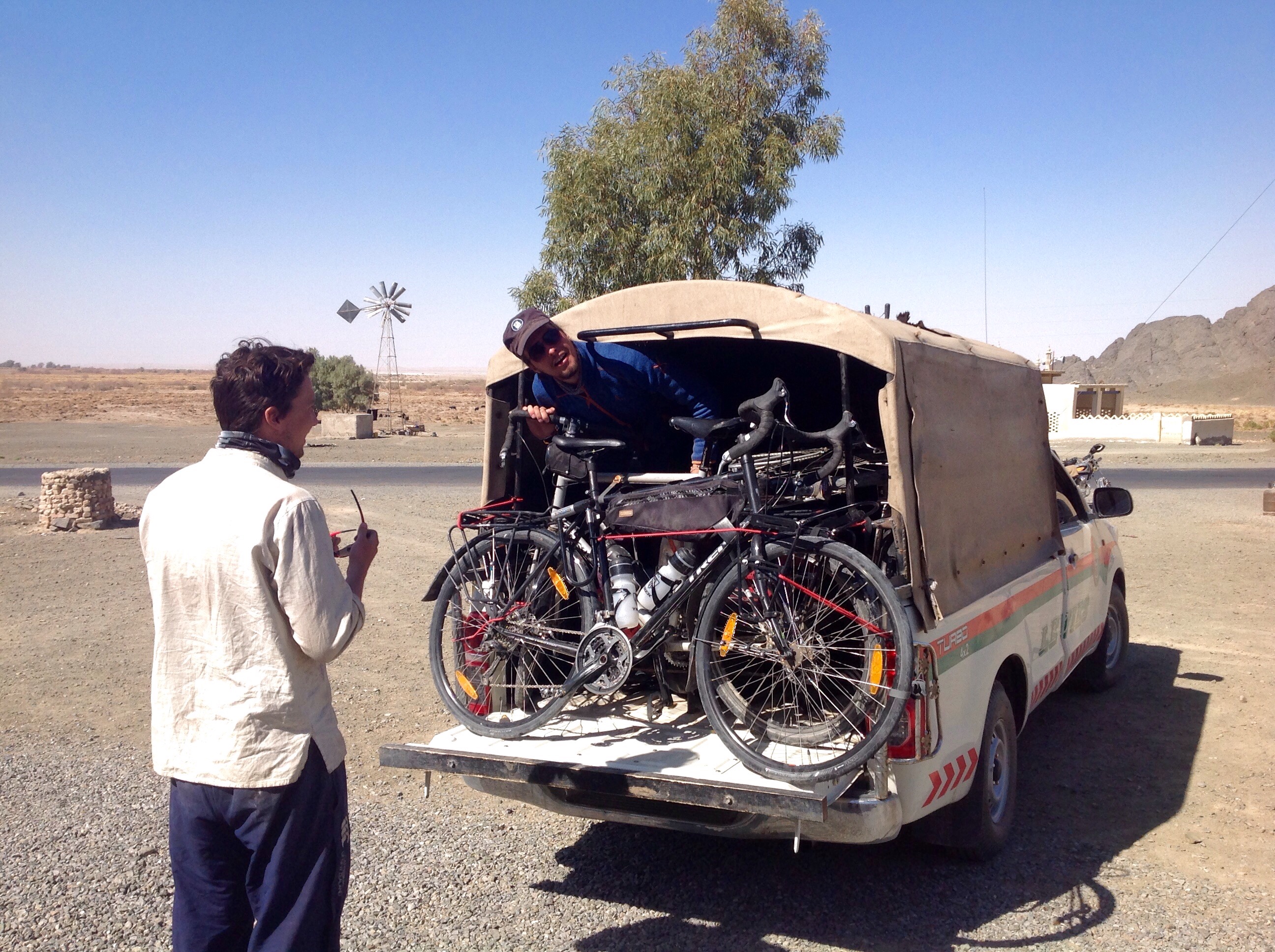 Any room in there? 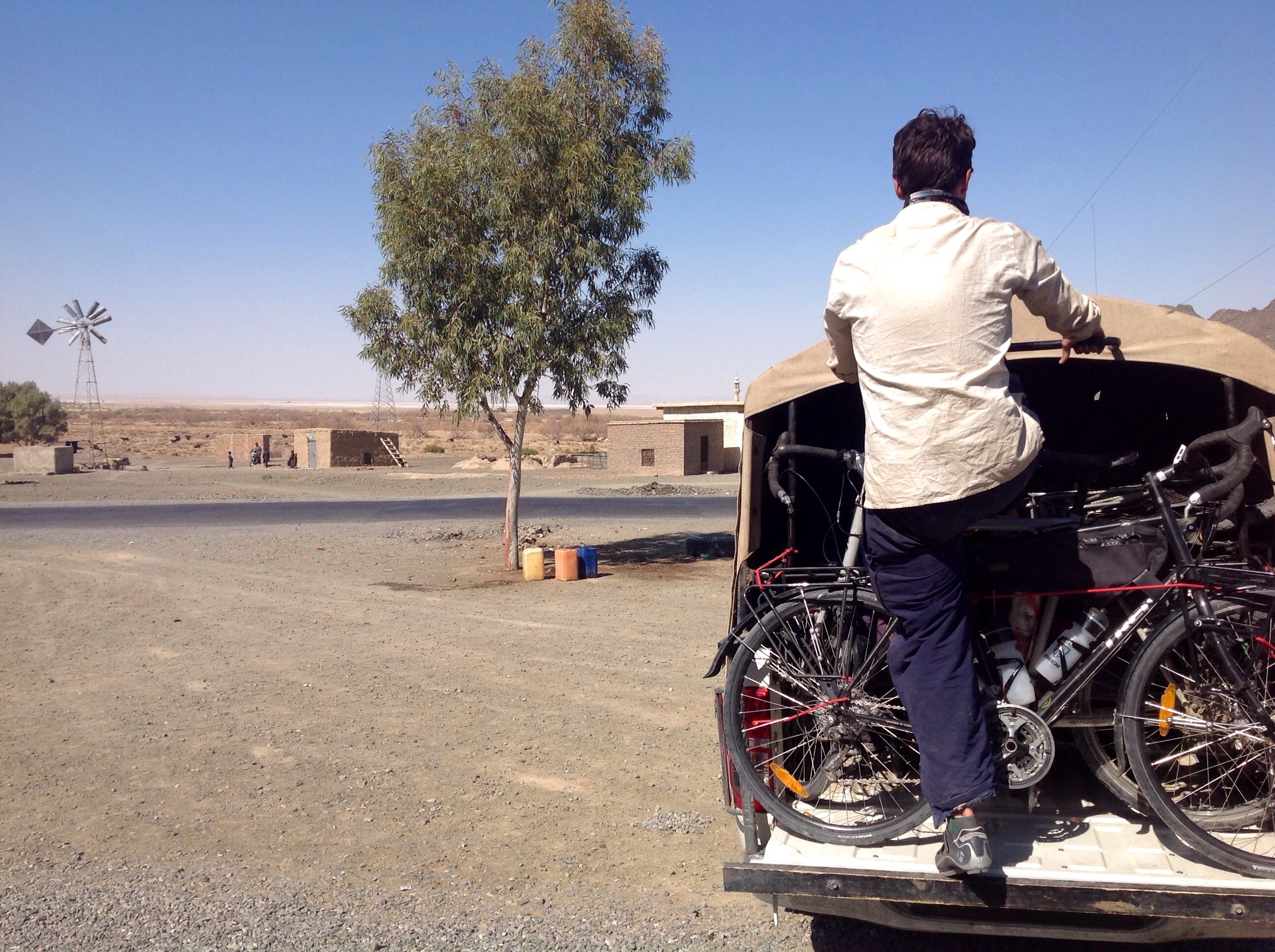 we got very good at fitting everything in one truck. theres two more bikes and all our luggage and four grown men back there 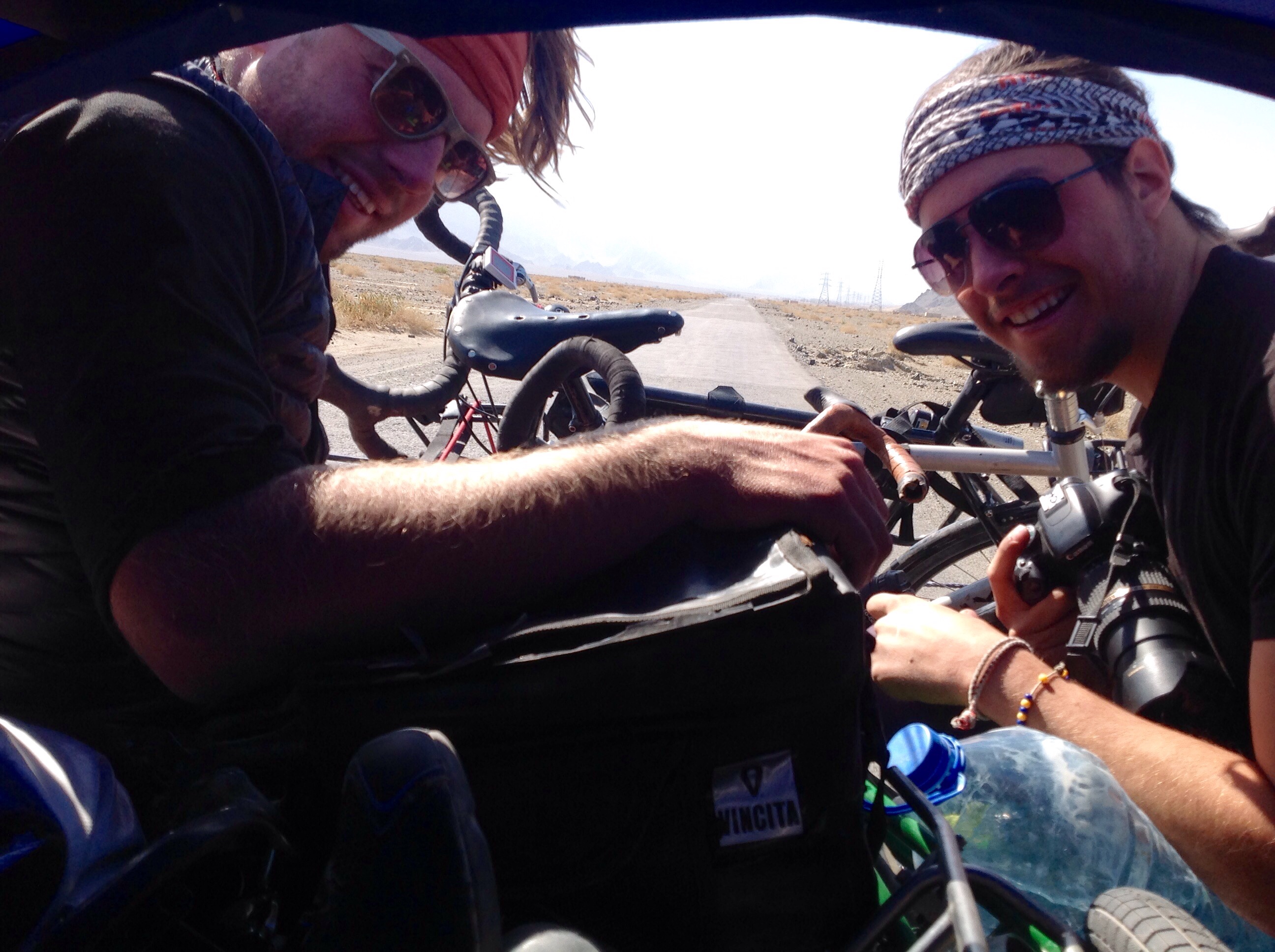 good view from these pick-ups 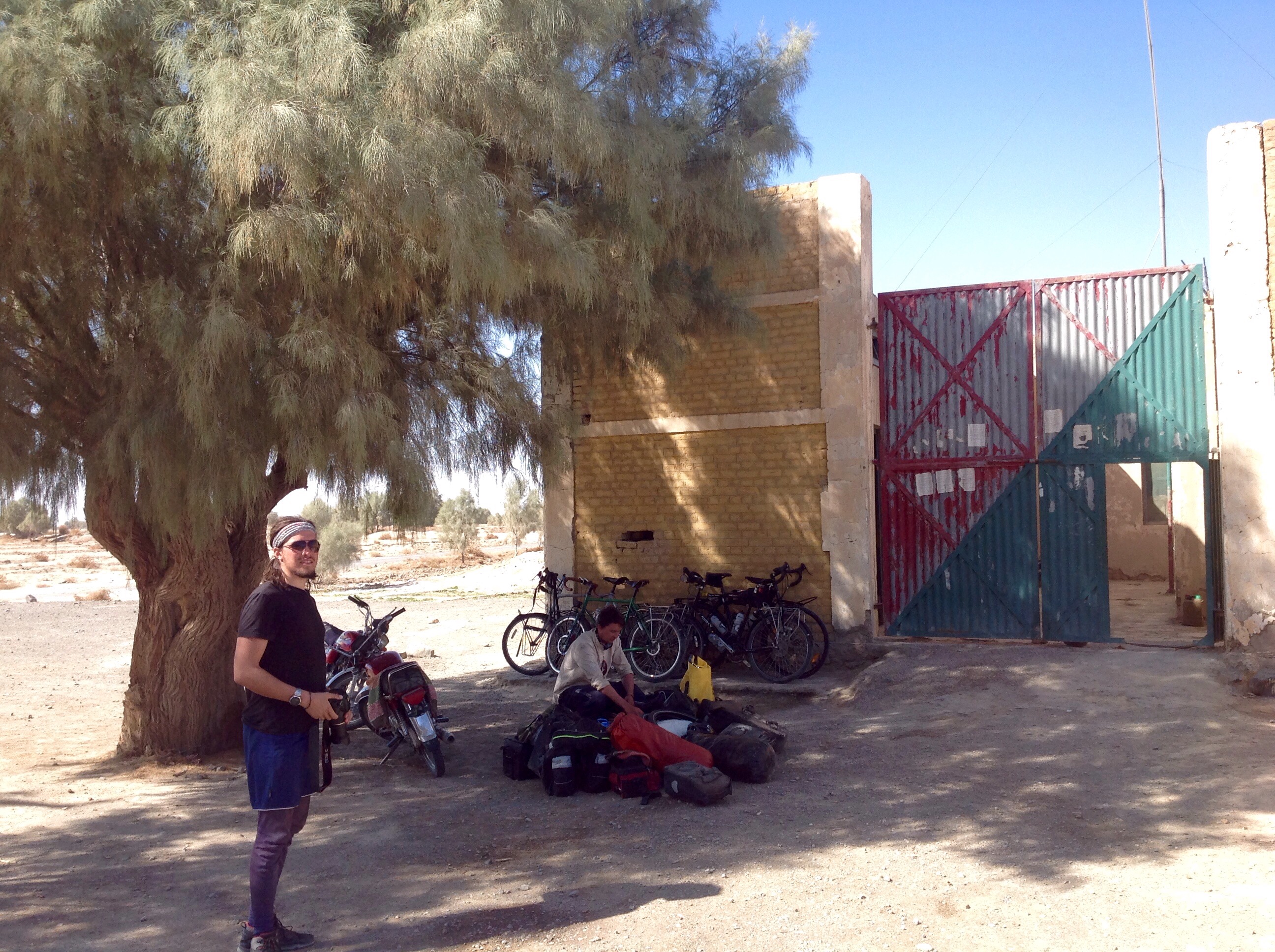 waiting at another station for the next truck to arrive. you can get an jeea for the amount of stuff we had to pack in each time

It was dark by the time we arrived at the outskirts of Quetta and here the levies jurisdiction ended so we waited by the road for an hour until the police arrived. They all seemed a bit high strung and even transferred us to an armoured car as we got closer to the centre of the city. We had to swap trucks three times which was a bit overwhelming in the dark in a busy city with all the police shouting ‘hurry up’ as we did so but kind of exciting too.
We made it at last to the Bloomstar Hotel, a compound of a hotel where all the tourists that pass through are dumped, like it or lump it. It had been exhausting trip across the Balochistan desert, transferring heavy luggage all day and riding in the back of pick ups but we were out the worst of it. Soon we would be on a train out of Balochistan all together and we could ride our bikes again.