It had been one of the coldest nights, crispy and clear and frosty but thankfully without any wind or snow. Everything was frozen in the morning, all the water, the eggs we were going to have for breakfast even our shoes and socks.

But it was a sunny morning and we soon warmed up in the light. It was the 23rdkf December, the day before Christmas Eve. We had come up with a plan yesterday to ride to the next big town on the route, Qazvin, about 160km away and spend Christmas Day off there. With this prospect in mind we set off in high spirits singing Christmas  carols down the road.

we stopped for a bit of sledding, have to break up the cycling somehow

Having reached the top of this long gradual ascent this morning we had a pretty pleasing morning ride along the flat summit in snow. Flanked by the mountains on either side it was one of the nicest morning rides we’ve had all winter.

We had a truck driver pull over and talk to us for a bit. He thought we were someone he knew from Lanzarote who also cycled, but he was happy to have met some new people. These little stops are always a fun highlight, a short little break in the cycling that brightens the ride.

We started descending now, as gradually as we had been ascending but cycling was a lot easier. We pulled into a small town called Sain Qaleh for lunch and had everyone nearby running up asking where we were from, welcoming us to Iran and a few jokers warning us to ‘be careful of terroris’ with cheeky grins spread over their faces.

Similar landscape on the other side of town, but the mountain peaks that had frames the road north and south started to drifted further apart and the flat basin spread out more and more. And of course the more we descended the less snow around us.

These gold topped mosques were pretty common across Iran

By the time we stopped at a small corner shop to buy morning breakfast the snow was pretty much gone, just flecking the mountaintops in the distance and hidden the north facing sides of hills and rocks. We had a fun interaction with the owner of the shop, a short, round smiley man who kept telling us just how much he loved Imam Khomeini. He gestured this to us by pulling a 100,000 rial note out of his pocket and kissing Khomeini’s portrait and then raising it to his forehead repeatedly. 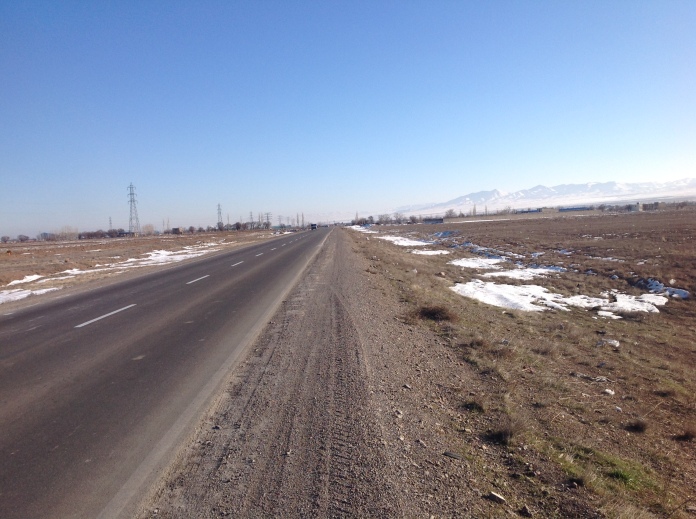 We found somewhere to camp in one of the wide fields at the side of the road, in a small depression made by a creek that hadn’t frozen over yet.

One thought on “Day 101: Soltanieh to Takestan”