We weren’t sure if we were going to make it to the border today or stop a bit before, but the riding was so flat today we ended up there before we knew it.

The wind had shifted and we had changed direction so we were riding into the breeze today, but it wasn’t that strong overall. We passed through a couple of towns, greeted by the usual array of car horns and shouts. I was a bit ahead of Finn and waiting for him to catch up when a car pulled over and two guys jumped out, one with a big camera.

They crossed the road and introduced themselves as reporters for a couple of Azerbaijani TV channels. They wanted to know if they could interview me for TV and sure, why not. It was a few basic questions, what do you think about Azerbaijan, where are you going and so on. By the time I was done Finn came around the corner and the interview him too. They said it would be on TV tomorrow, but we wouldn’t be in the country to see it.

riding along the below sea level road

We were making the border crossing at Bileh Savar, which is further north and inland than Astara, the main crossing between Azerbaijan and Iran on the Caspian coast. We arrived at Bileh Savar on the Azerbaijan side shortly after the interview, though we were still 20km from the border.

Stopping to get some snacks at a small roadside market we were invited in for tea by the general assembly of curious men and were led into a small barber shop. We sat for a while and then had to move on, we wanted to get to the border before it closed.

The ride to the border was almost uneventful, except that I almost got bitten by a dog. We get chased so much by dogs on this trip that it’s bound to happen eventually, though most of them just bark at you. Fortunately anyway I got off the bike and onto the other side, it only managed to graze my calf. The owners chased it off quickly.

The border was near where the dog incident happened and we crossed it quickly on the Azerbaijan side but slowly on the Iran side. They were quite thorough checking the passports. By the time we got out it was dark.

Iran border at night in Bileh Sivar, the photos are of the Khomeini and Khameini the first snd current Supreme Leader

It was also clear from the Farsi everywhere, the portraits of Khomeini, the headscarves, everything, that Iran was going to be special. The border opened up into a busy street in Bileh Savar and we went to change our Azeri manat (1 manat is about 1.2 euro) to Iranian Rials.

Since Iran has quite a big inflation problem we left with a big wad of paper money of denominations up to 500,000 (1 Euro is about 33,000 rials). We then ate some kebab and rode out of town.

We hoped find somewhere to camp soon but there was nothing that we could spot in the dark. Getting a bit desperate we stopped outside a mosque and we’re going to ask to camp on their grounds when a car pulled up. Out came two smiley Iranian guys who spoke to us with a smattering of English. They took a photo then invites us for ‘Hubble bubble’. We weren’t sure what that was but sure lets find out.

They brought us to a small building, the inside warm with raised platforms along the wall and carpets everywhere. Turns out Hubble bubble meant hookah, and there were a couple of guys recumbent bubbling away. We greeted them all and soon someone had called there cousin who spoke English. 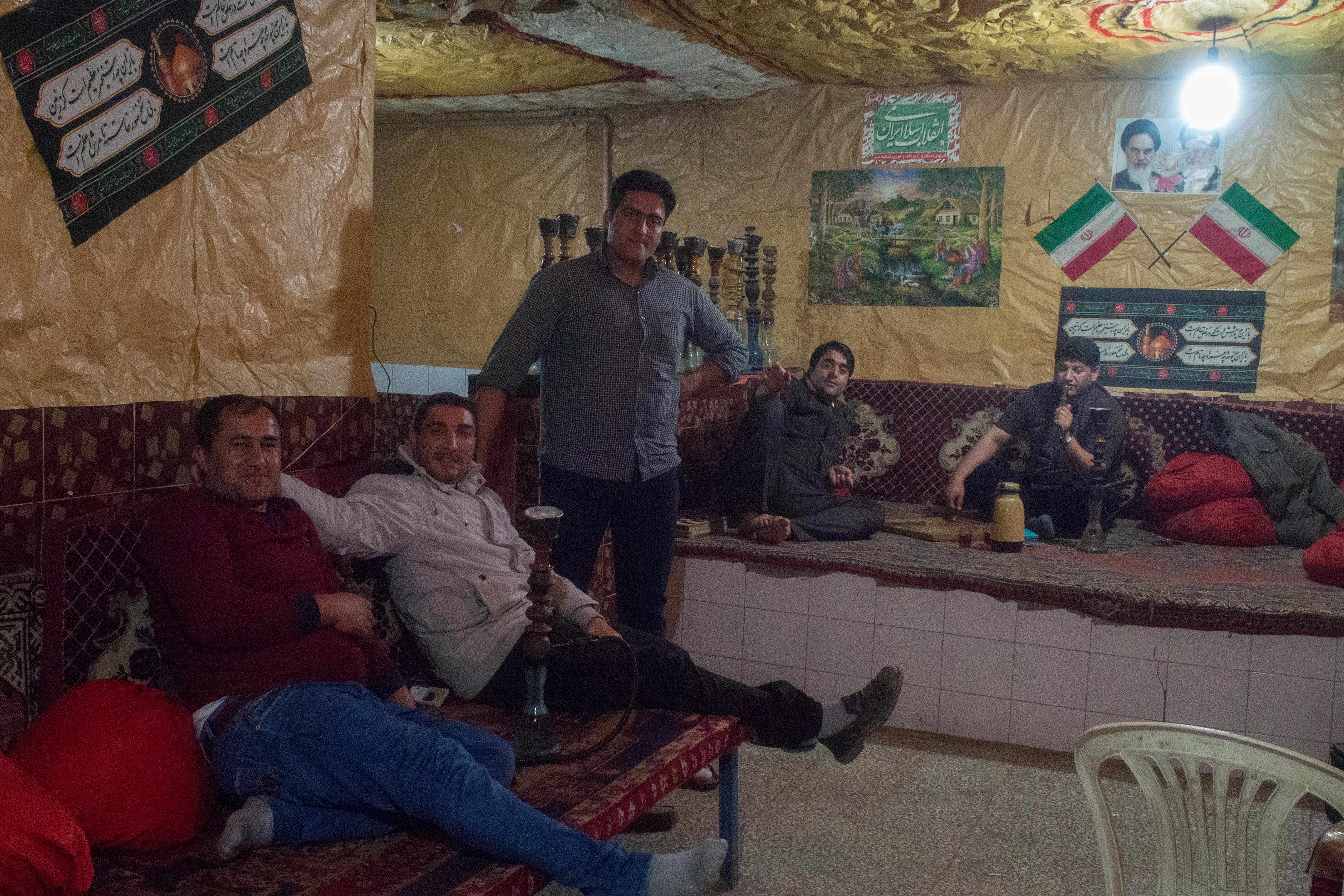 the lads at the hookah bar, Khyyam in the white Jacket

This cousin was a guy named Khyyam who was very friendly and talkative and had never met a native English speaker before. He was therefore fascinated with us and chatted into the night. At some point it was organised for is to go sleep at one of the owners house that night and we rode back with them and slept on futons on a carpeted floor. It was busy and fantastic introduction to Iran. 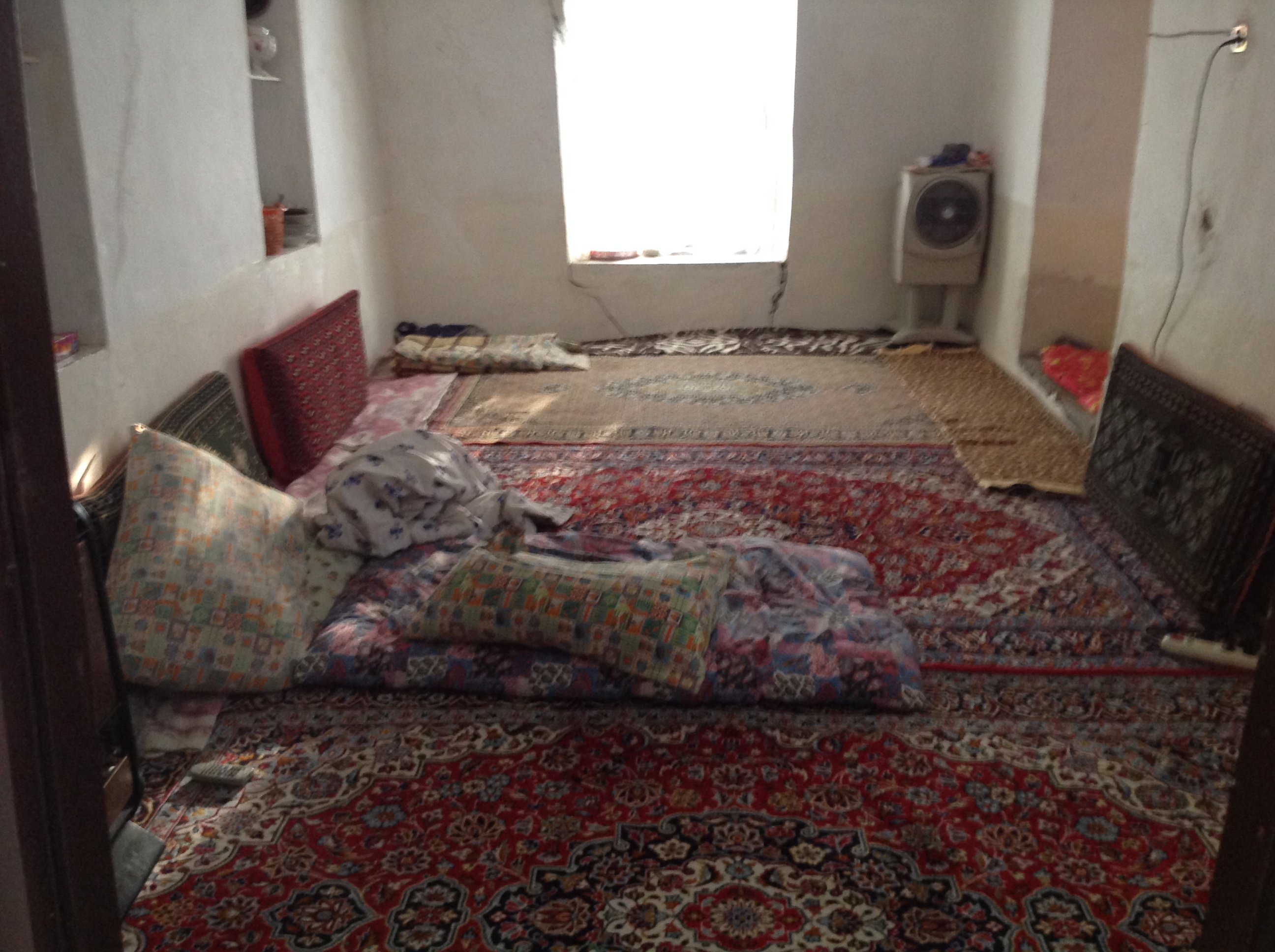 where we spent the first night in Iran