Some clouds had rolled in last night and it had drizzled a bit. It was overcast still when we got up. After breakfast a local man came over and had made brief conversation and then watched us pack up our camp while he waited for a lift. 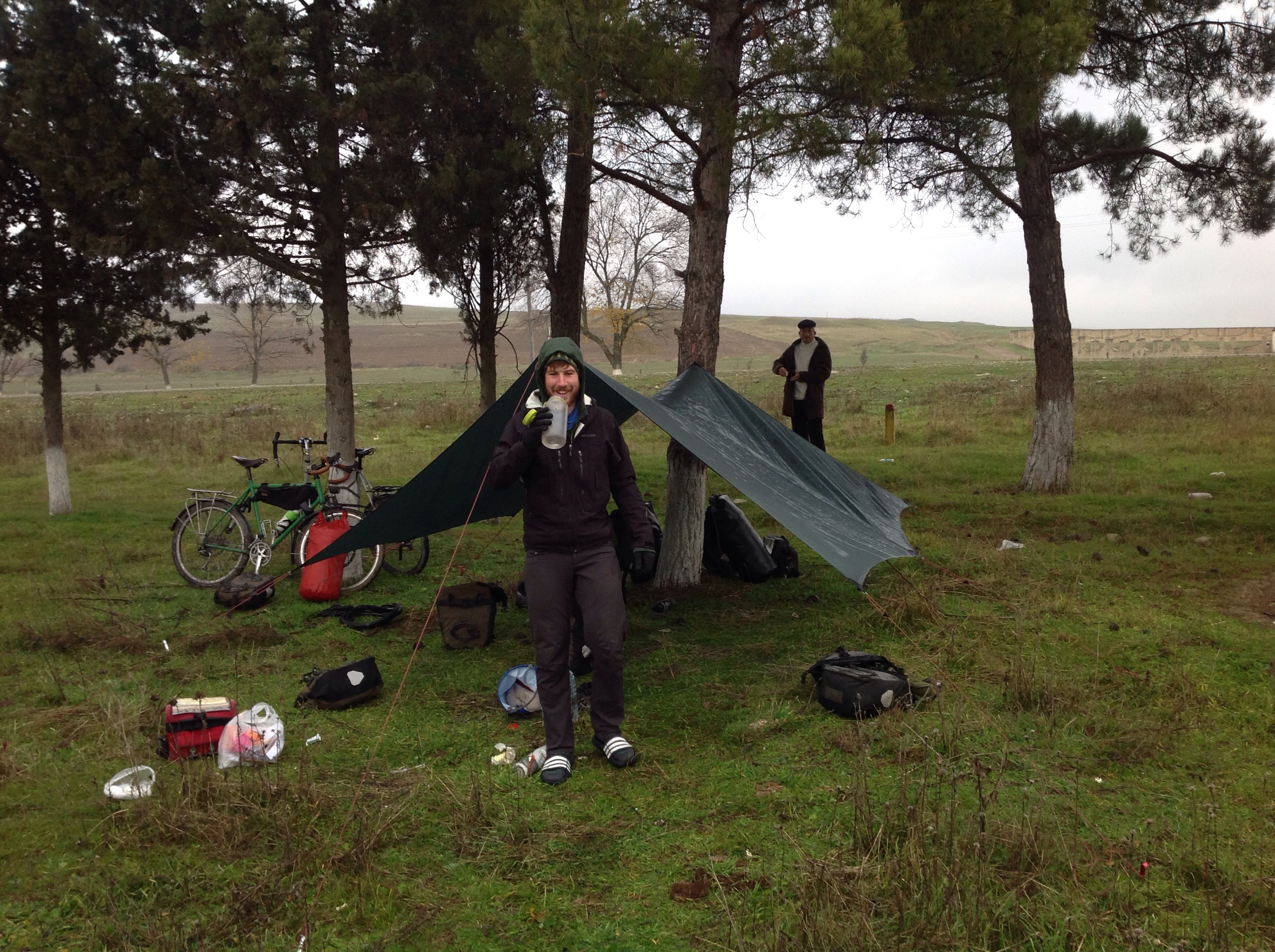 our audience this morning there behind the tarp

In terms of terrain we were riding through this was really a day of two halves. In the morning it was more of the green rolling hills like yesterday. We had time and the wind on our side now so we didn’t have to ask any truck drivers for lifts up the ascent. 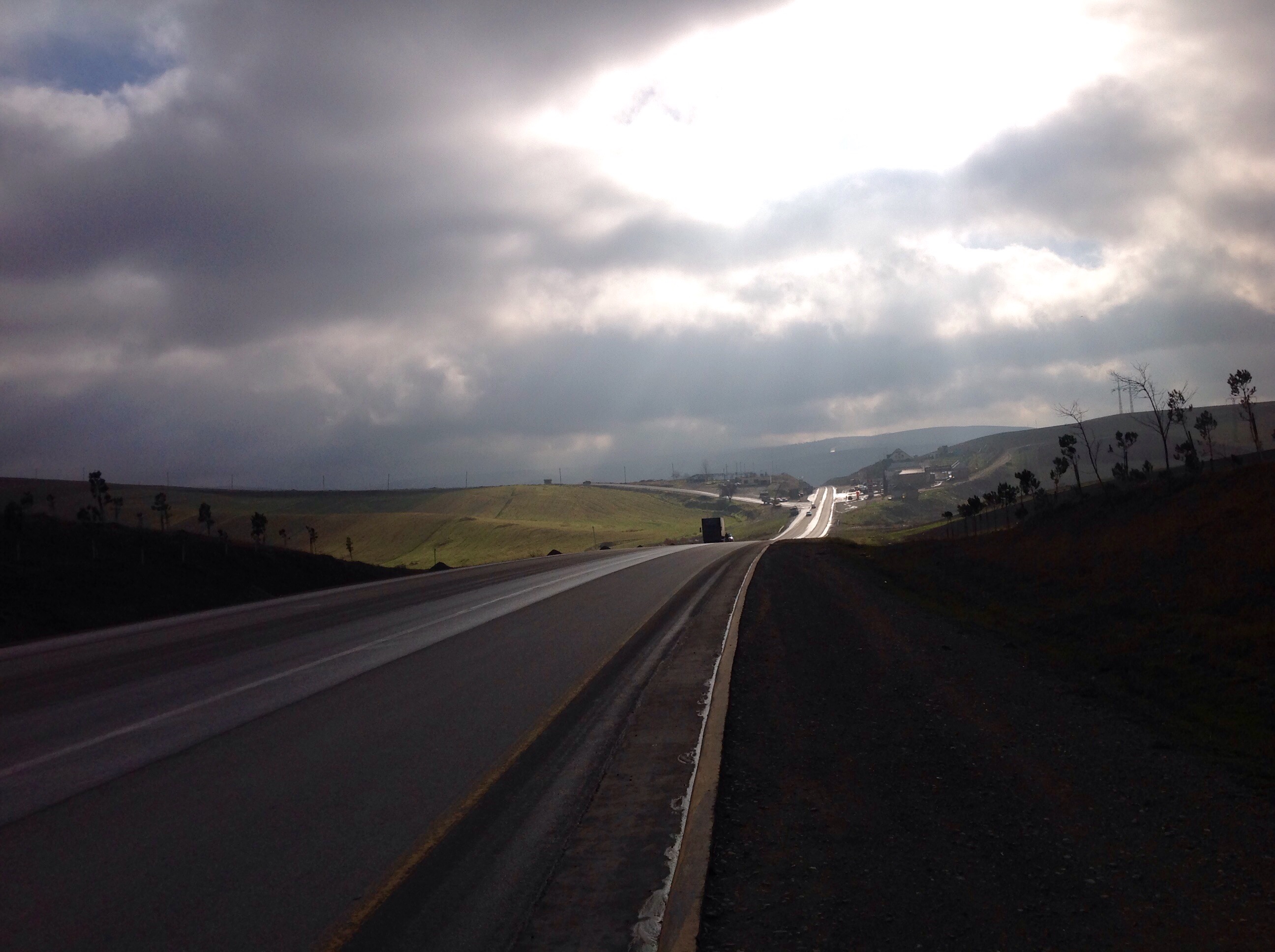 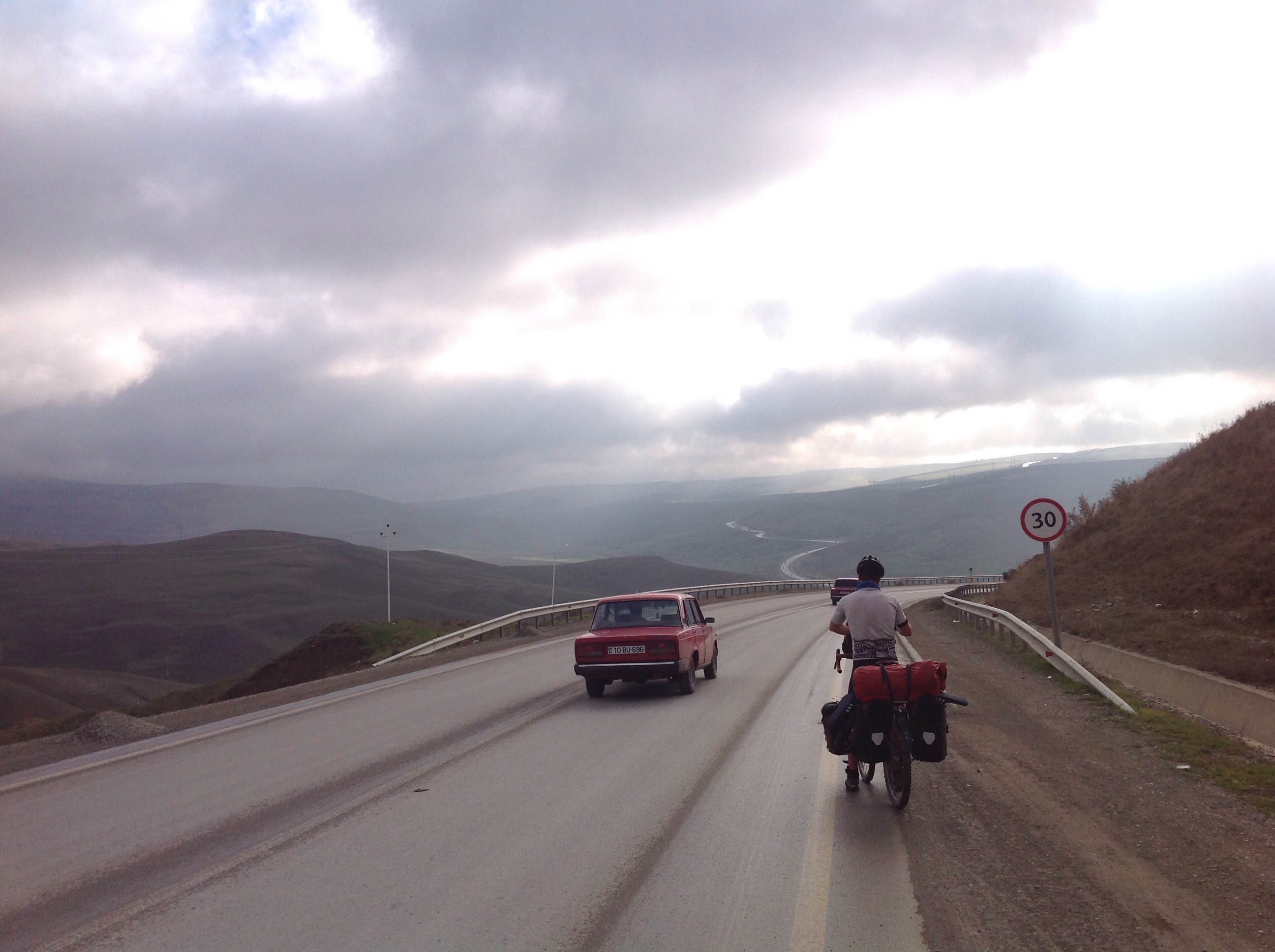 Quick pit stop at the last town before Baku, Qobustan. It’s very much a town that seems to have sprung up around the highway, or maybe grown on account of it. Shops and garages lined the road but the buildings didn’t extend much beyond them. As usual there was the requisite number of old guys just generally hanging around outside and as usual they had a great time staring at us in our shorts. 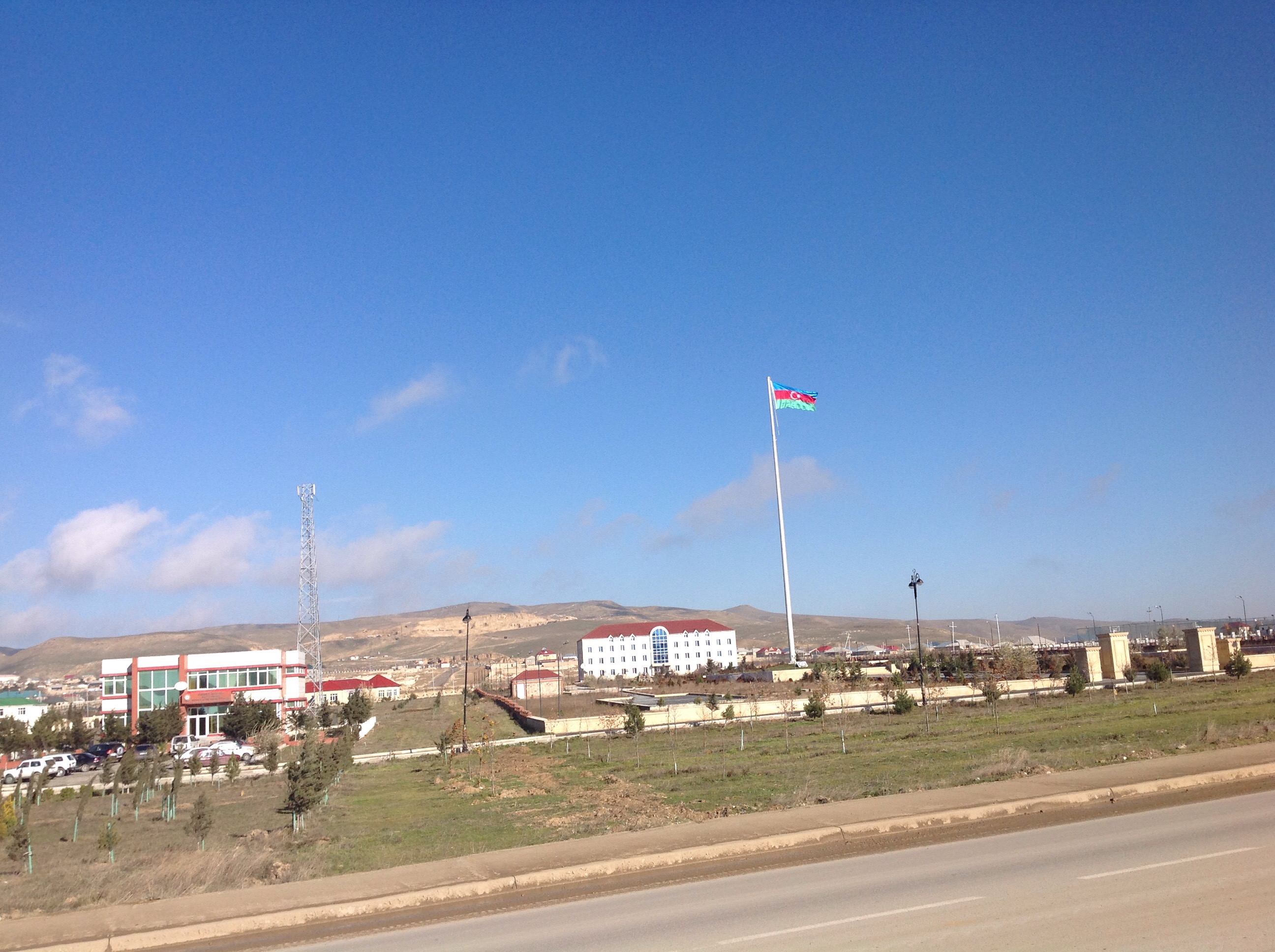 From Qobustan the scenery changes dramatically, we descended for a long time and left the greenery behind. We were in sort of desert terrain now. The road was still under construction in parts, but a couple of new lanes were open and what a treat it always is to ride on fresh Tarmac. 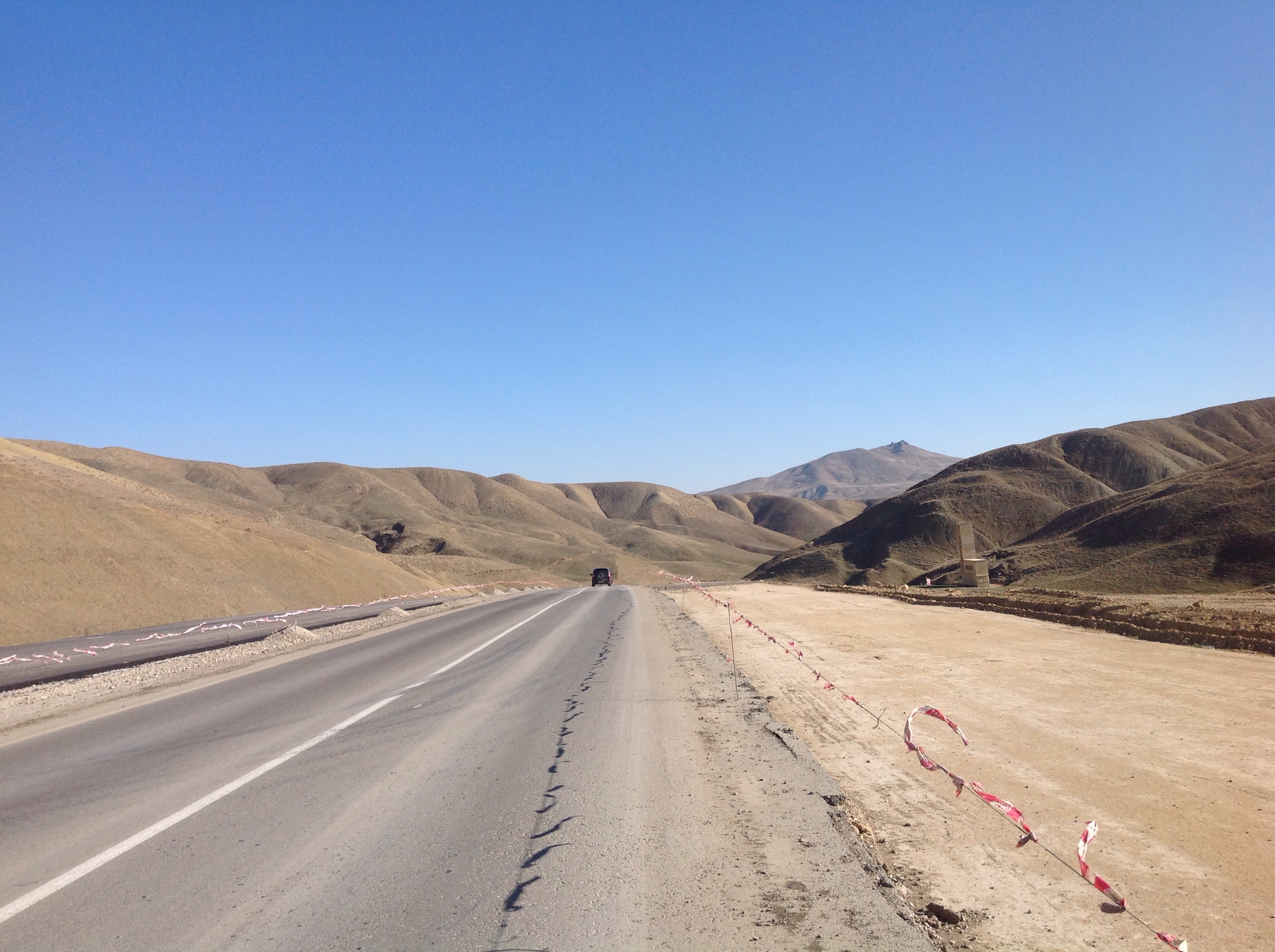 the road downhill through the desert 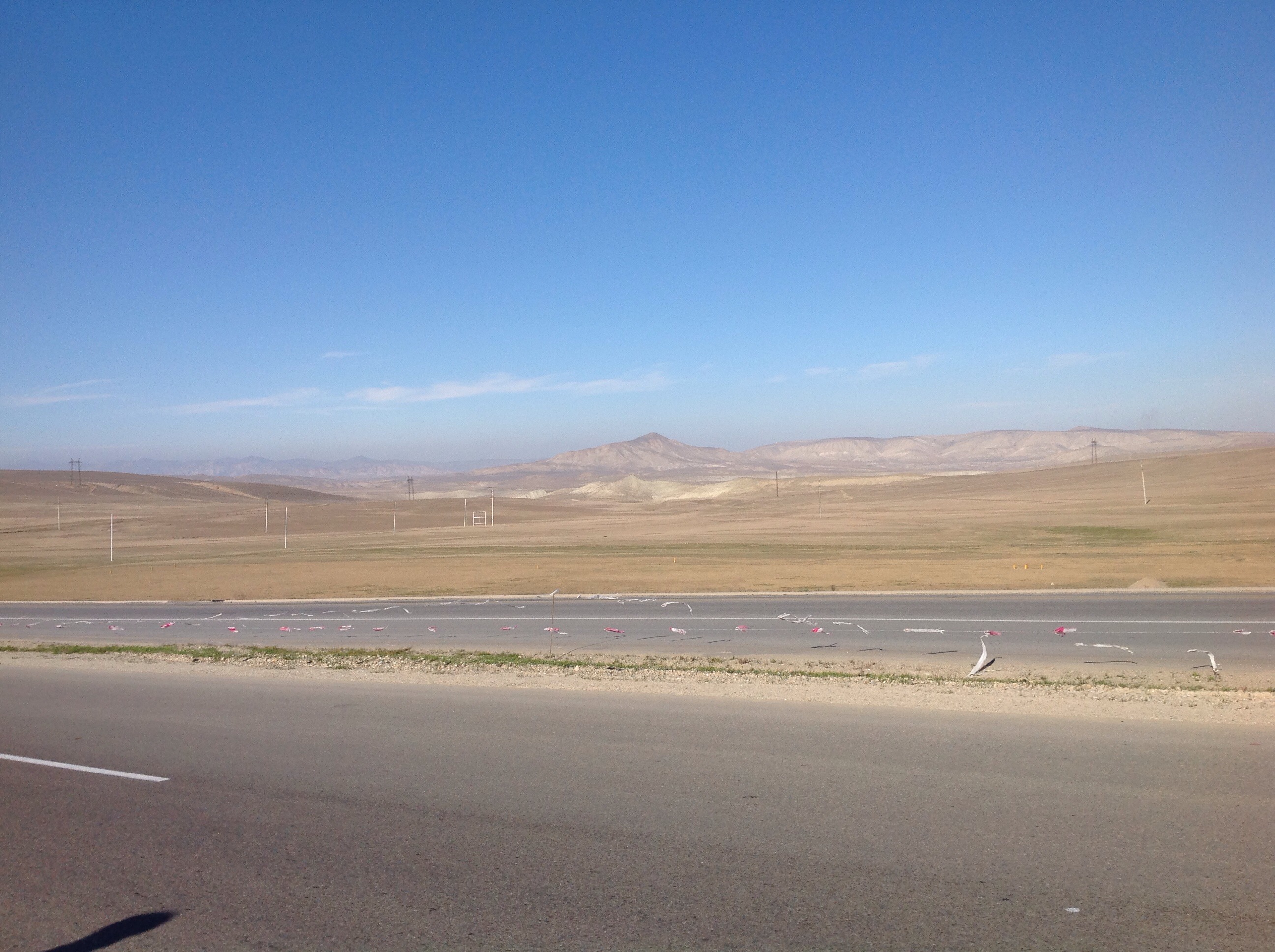 you can see the wind blowing along the road

The strong wind was behind us most of the way to Baku, as we got closer to the city and began to change direction it really began to buffet us from the side a lot more. We found out a bit later that Baku’s original Arabic name meant ‘Wind pounded city’. Given what we experienced on our first day riding into and around it I couldn’t agree more.
The sprawl out if Baku began about 30km before we reached he city proper. Busses crammed with commuters drove past us every few seconds and the traffic got busier and busier. The outskirts were big and kind if shabby apartment blocks. As we got fur into the city concrete began to be replaced by steel and glass buildings. Before we knew it we were in the middle of the biggest city we’d been in since Ankara.
Baku is an impressive city, and when compared to what we rode through in the rest of Azerbaijan in sticks out like a sore thumb. The Lonley planet describes it as “Dubai meets Paris” and it’s the most succinct description of the place.
We got in contact with our host here, a Columbian dude working in the oil industry in Baku. He was really welcoming and his place very nice, an apartment down by the port. He served us up a lovely dinner and then a long overdue shower and night sleeping in a warm bed inside sealed the day nicely. 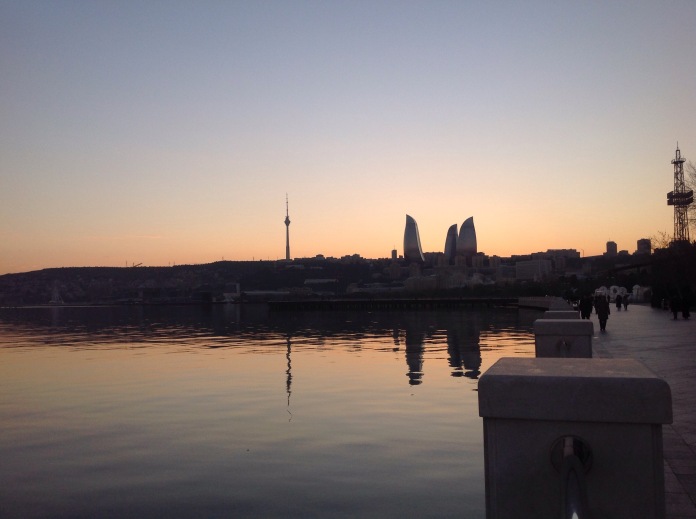 One thought on “Day 88: Shamakhi to Baku”