We woke up clear blue skies! It was cold, but clear and after a leisurely porridge breakfast we loaded up the bikes while some old farmer jack muttered incomprehensible Georgian to us. We started off with a bit of a steep climb up a hill, but at the top, what a view! The clear day gave us a view of the Greater a caucus range to the north across the plains which had only been partially visible until now. Over the last few days they had received a fresh dusting of snow and stood out sparkling in the morning sun. 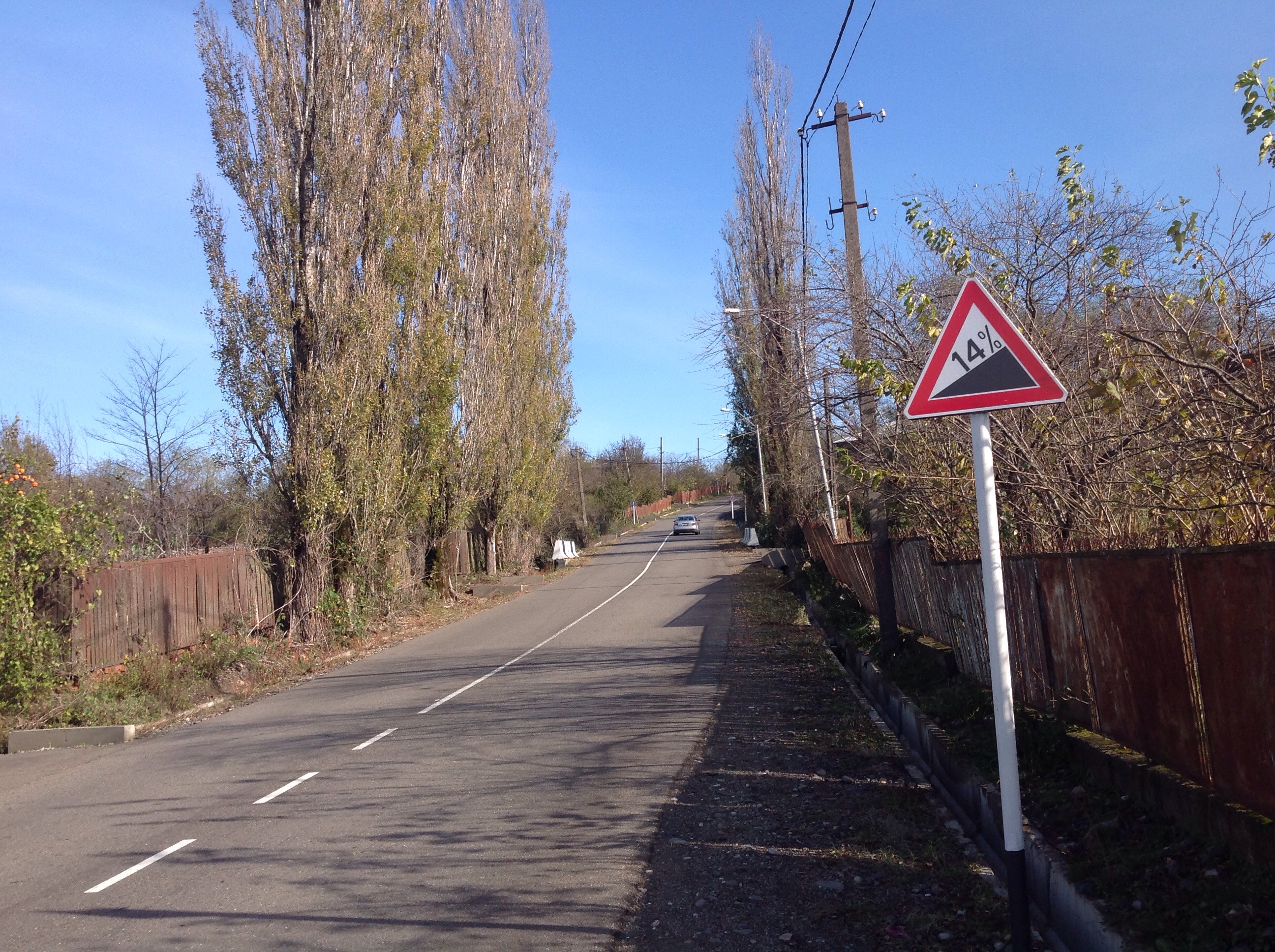 a decent hill to start off the ride 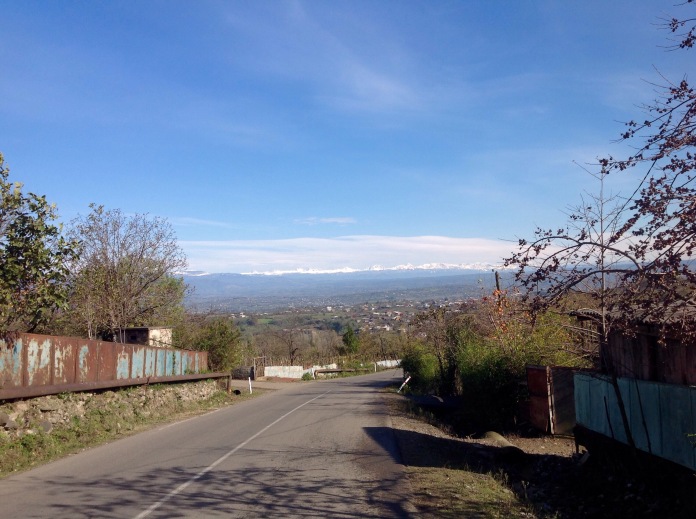 We sped down the other side of the hill into the plains, down to the Kvirila river and then through the town of Zestafoni and out the other side, following the river up into the mountains. A gradual climb along the banks followed, running in parallel to the river and railway. Without noticing it we found ourselves back in the mountains again, which we were of course pretty happy about. Before long we arrived at a fork in the road, the main road veered left around the northern base of the mountains, the smaller local road to the right around the southern face. They both met up again, 60 or so kilometres ahead when the peaks levelled off again to plains so we went for the secondary route. 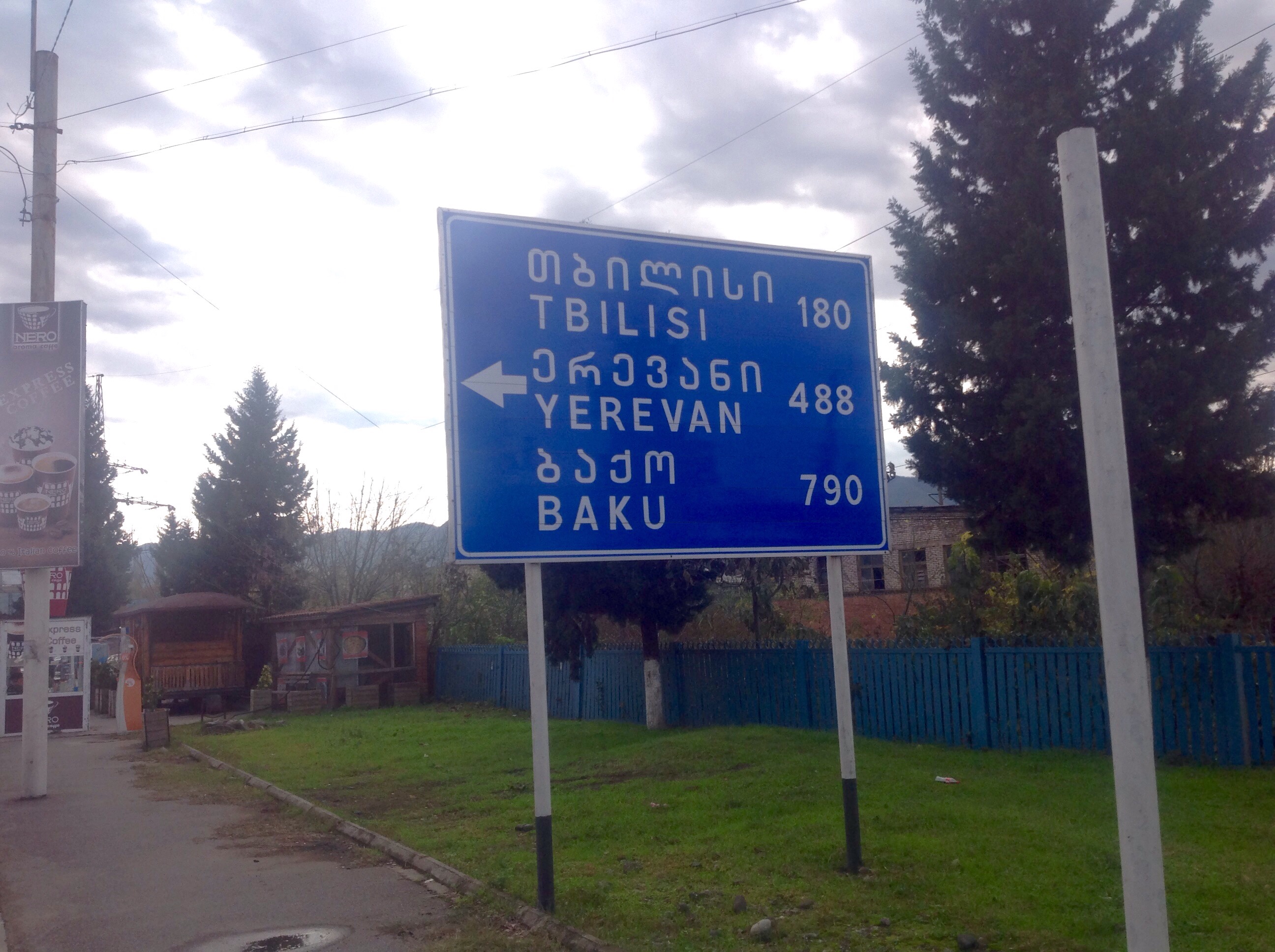 Immediately we knew this was going to be a fun ride, the road was riddled with potholes and the rain had pooled in them and flooded lower areas of the route. We road up and down over the spurs, gradually climbing and every now and then treated to great mountain gorge views. The road was sealed for the most part all the way up the town of Kharagauli where we picked up some food in a local convenience store. The main cause of traffic in the town seemed to be the local police car riding up and down the road, passing us by every three minutes as it reached the limits of town and turned back again. 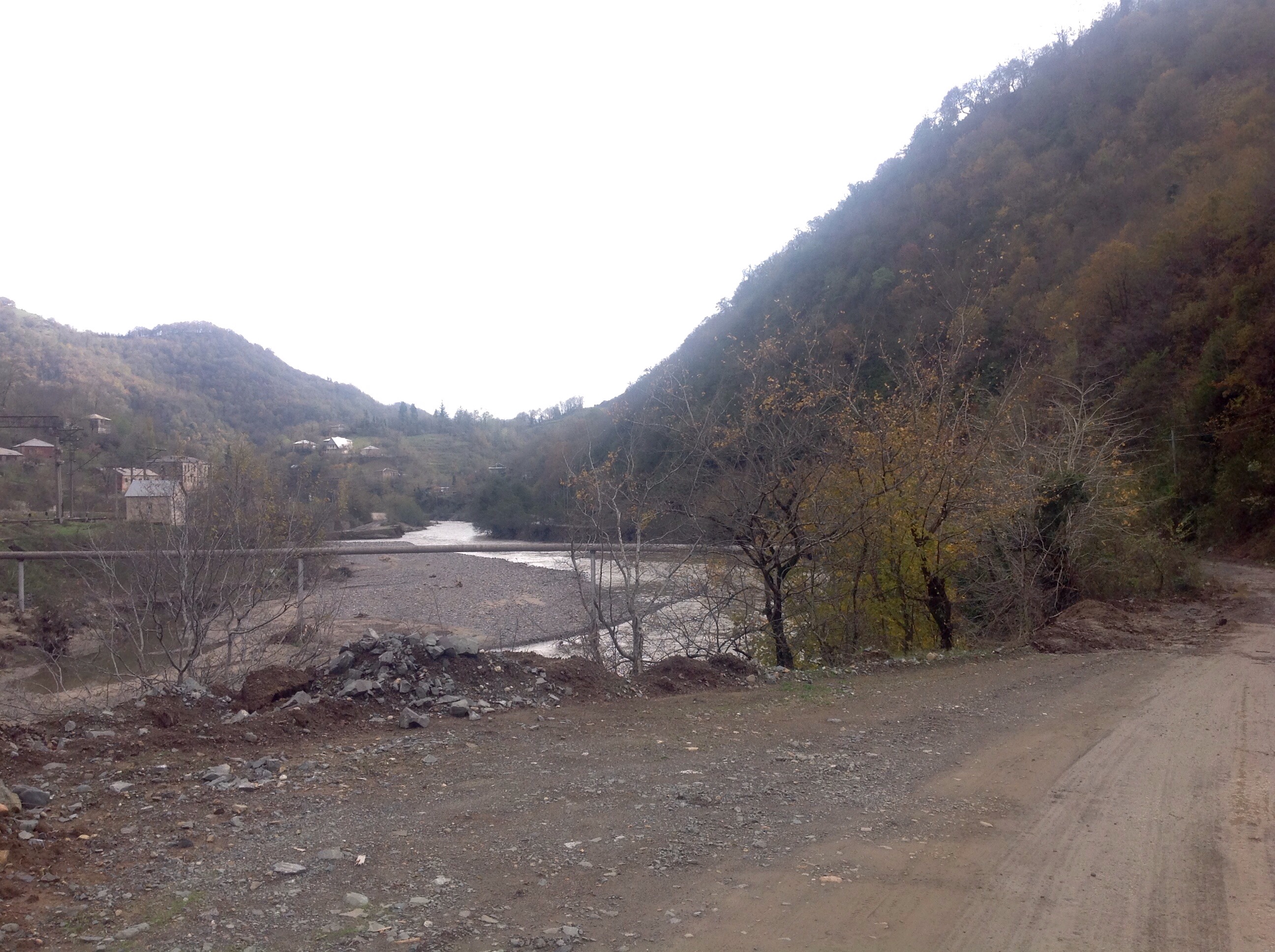 turning off the main road

We rode through Kharagauli and out the other side. Almost immediately the quality of the road dropped, there wasn’t much of the sealed Tarmac left and where the dirt had been exposed the rain and passing cars had churned it up into mud. Still the scenery was fantastic and the road, even in its sorry state was still perfectly rideable, just at a slower pace. 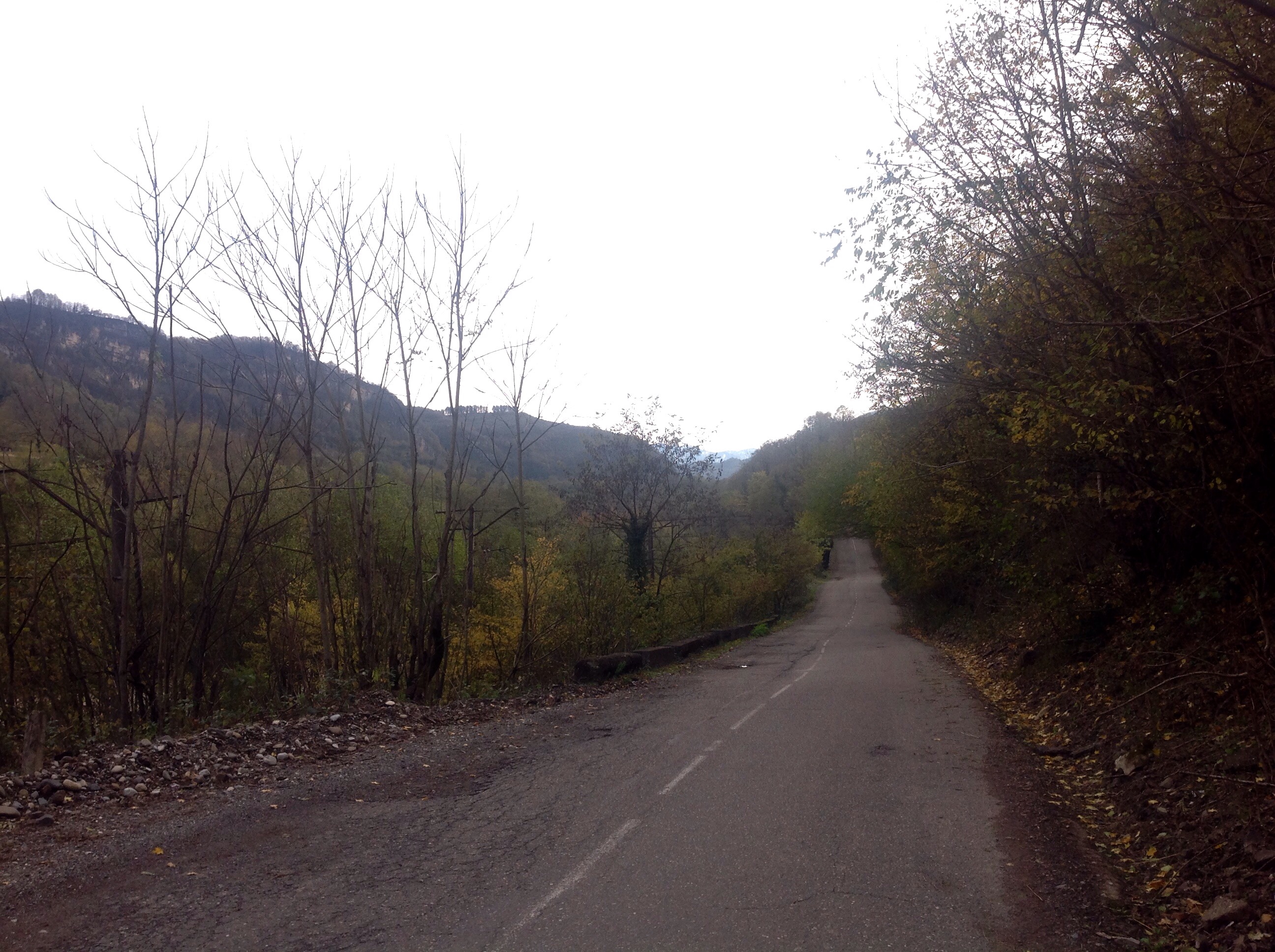 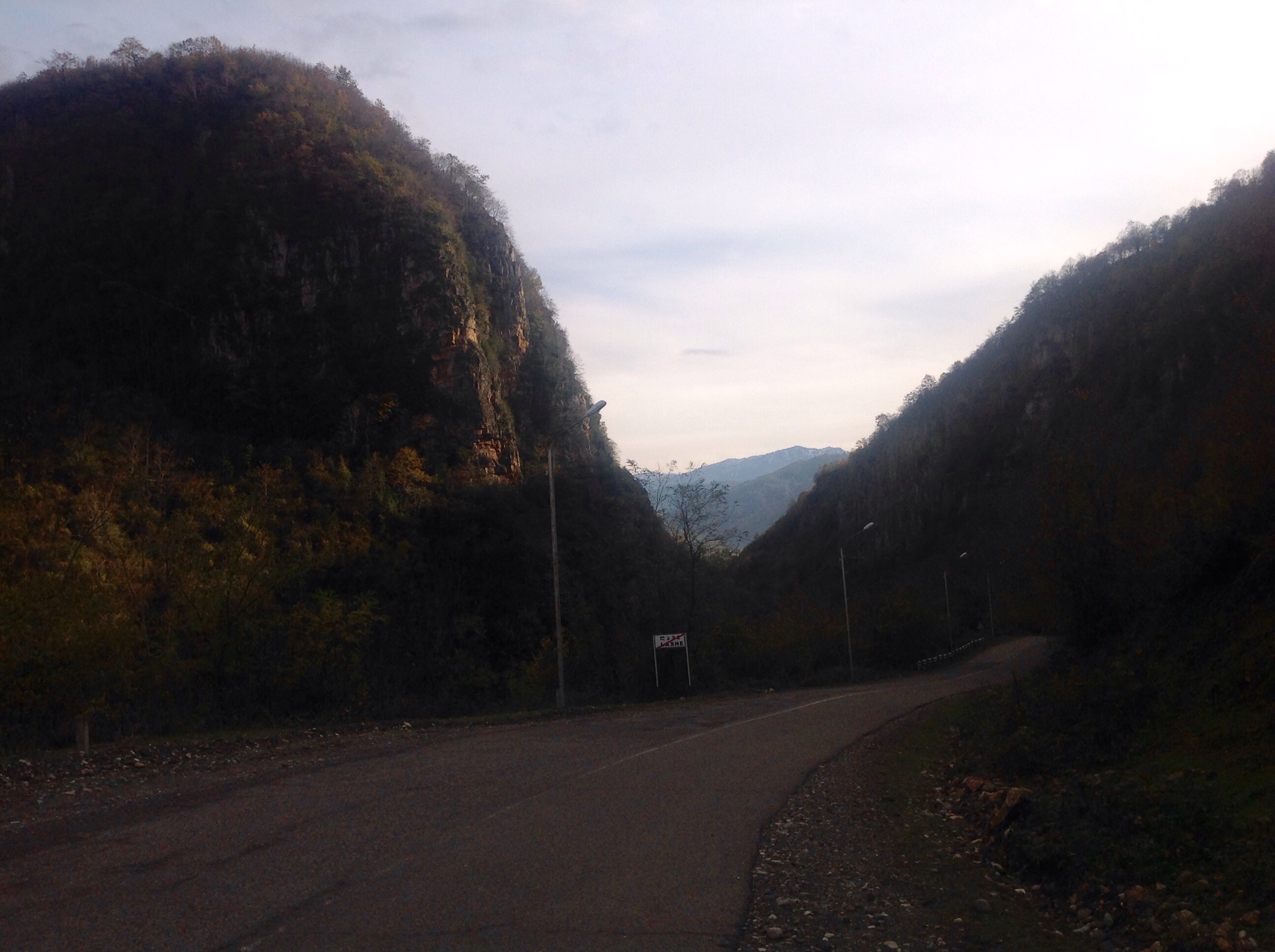 With sunset a little over an hour away we kept eyes out for a nice spot earlier, given we were in the mountains and large flat areas of unused ground were a bit harder to come by. We found an area of raised ground 80m from the banks of the river. We were hesitant to camp right on the bank given the recent amount of rain, but some debris and water sodden ground around the river gave away the high point the river reached over the last couple of days, so even if it did rain heavily our camp would be well clear. 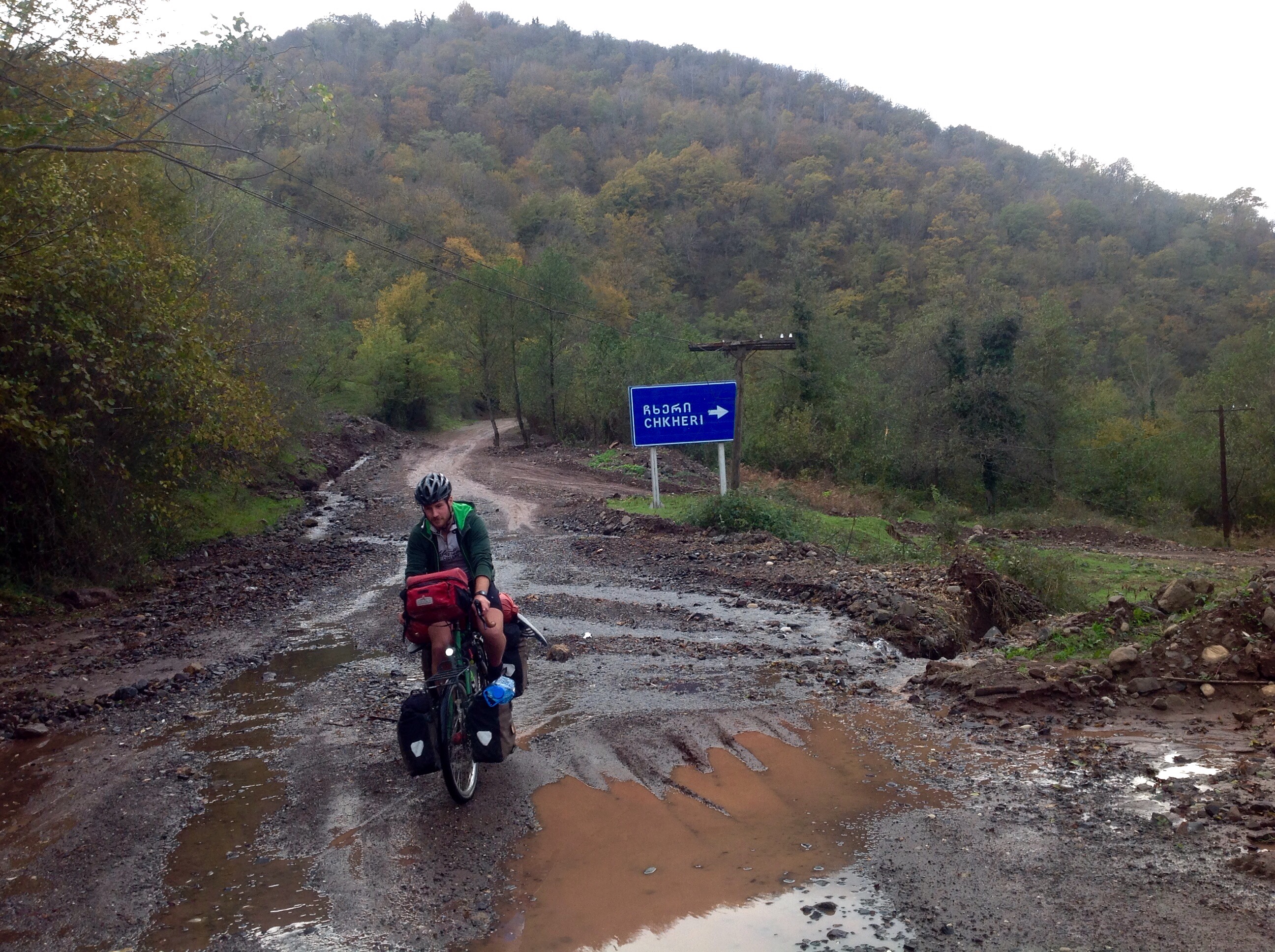 the quality of the roads decreased significantly after Kharagauli

With camp set up and a decent amount of daylight left we settled down to enjoy a relaxing evening in the mountains. A couple of minutes passed and then we heard and saw to dudes on horses galloping down the road. Gave them a wave and they stopped and trotted down to say hi. They seemed like nice guys and offered us a cup of beer from the big bottle they were carrying.
We sat around and gestured for a while until they offered a go on the horses. We thought they’d never ask! Finn hopped up first and went around for a trot, almost riding the horse through the tarp but turning it round in time. I had a go next and this whole horse riding lark seems to be a lot easier on the legs than bike riding, maybe we should swap. 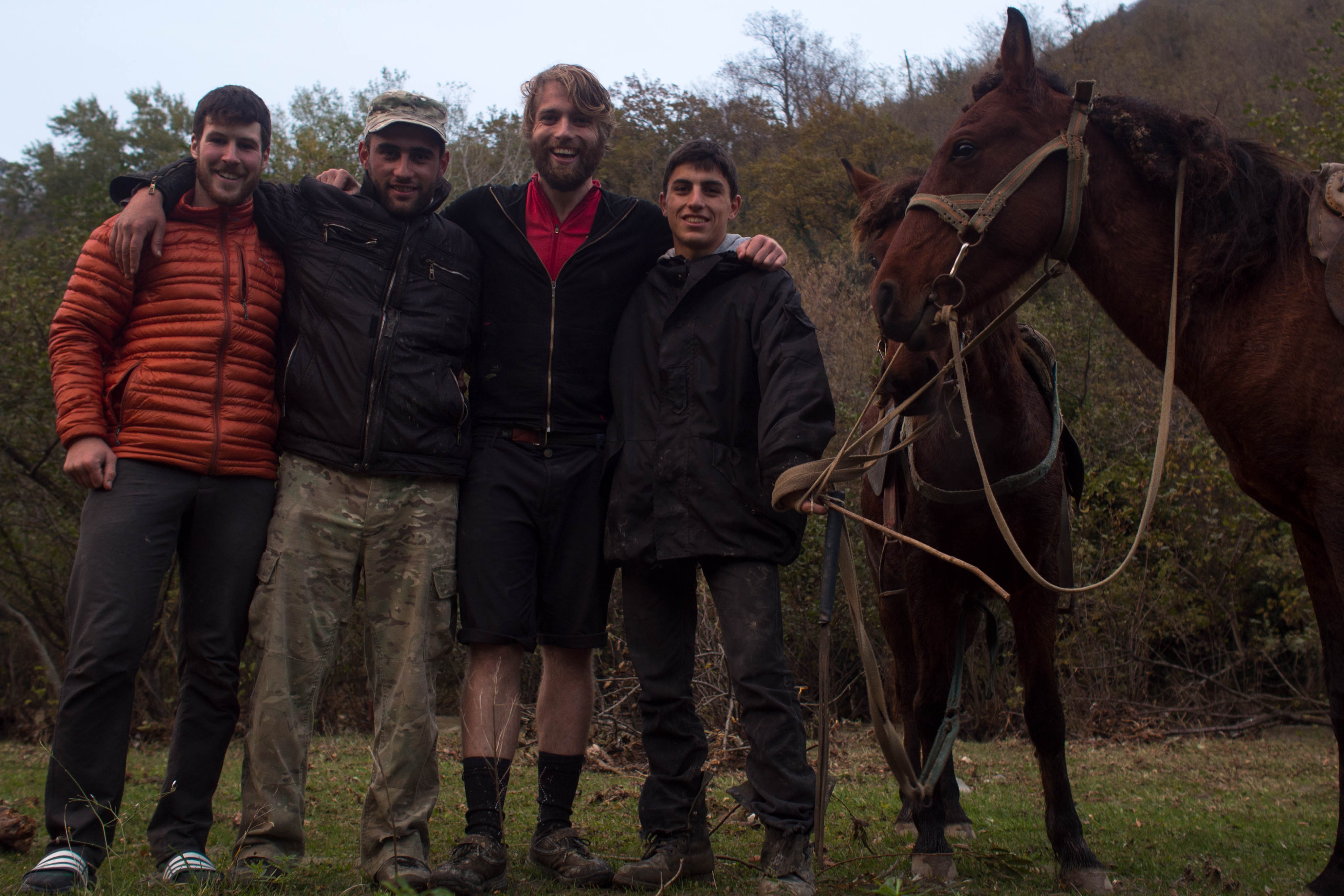 After our little escapade the guys said goodbye and quite literally rode off into the sunset.

sunset in the mountains