Today was an exciting day, if we had read the map and planned the route correctly we would be riding on a road that wasn’t a highway today which would be a first for our journey across Turkey, even the mountain roads between Istanbul and Ankara had technically been highways and had quite a lot of trucks using them as a result.
First though we had to reach this fabled tertiary road. That involved a long but relatively easy climb up to the town of Bala. The landscape here reminded me largely of the landscape that we rode into Istanbul through, rolling farmland, though maybe the hills were a bit steeper.

this guy was having a great time

Bala was a great little town full of very excitable people. Most of them were very ok eased to see us and when we stepped into one of the two restaurants in town for lunch everybody there (it was packed out) gave us a good long stare. But not in any malicious way, I’d reckon not a lot of foreign pass through Bala. Lunch was great, a tasty and cheap kebab. We also got to witness local political canvassing as some politician burst into the restaurant and started making a short speech.
Leaving Bala we passed by two young guys next to a scooter in need of a screwdriver. We lent them one of our multitools which they were very grateful to receive, and then proceeded to use it to take the license plate off the vehicle. Not entirely sure what was happening there…

the road out of Bala

After this encounter we arrived at the turn off for the small road. If we had read the map correctly we could follow small roads like this from village to village until we were within a day’s ride of our destination: Cappadocia. The we would have to get back on main roads. 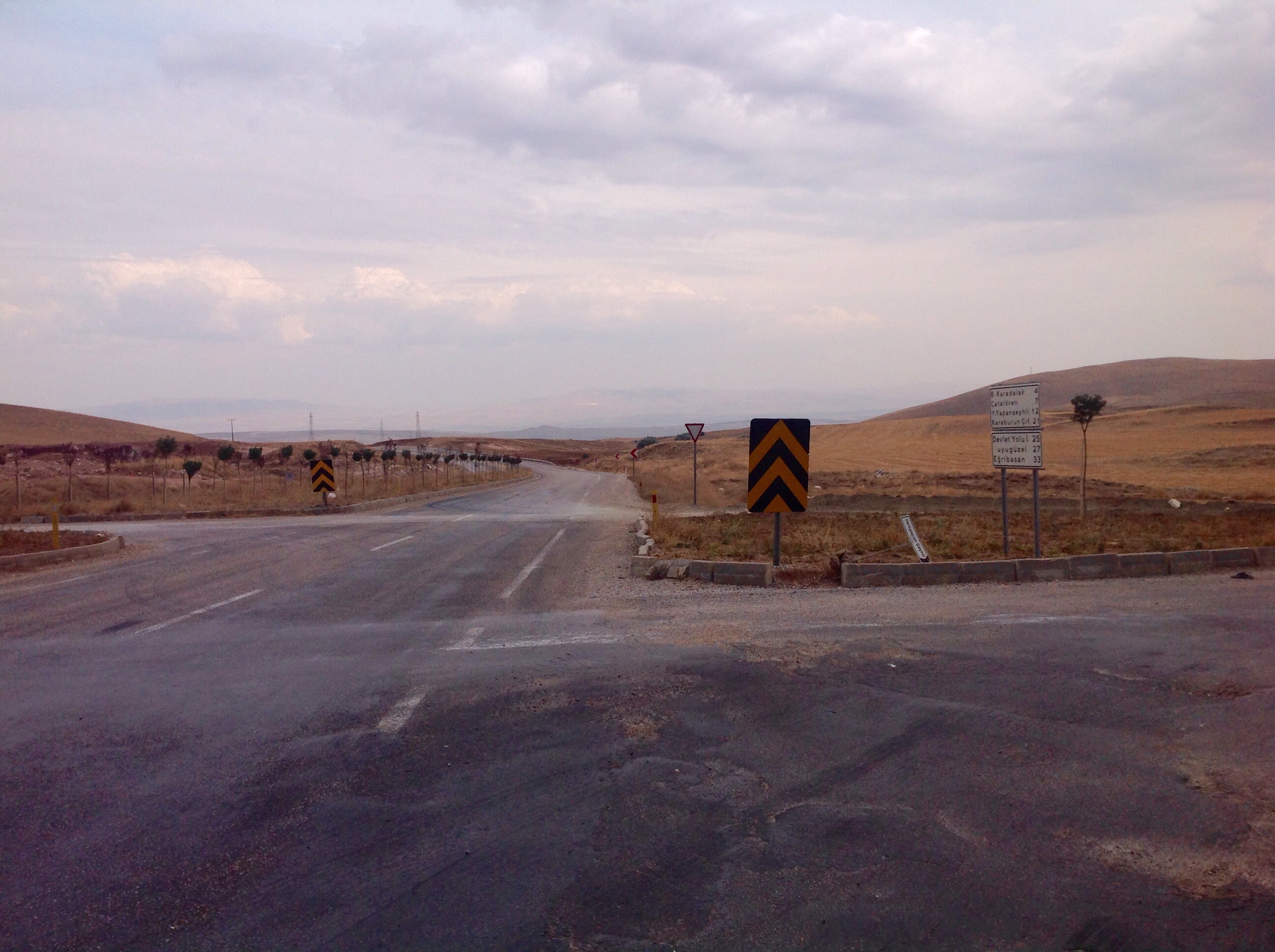 Until then though, we had lovely quiet riding. After making the turn off the traffic eased off almost entirely. The road ran for a long time downhill toward a river giving us ample time to take in the landscape which wasn’t quite plains and not entirely hilly. I guess you’d call it steppe country and it was easy to imagine Mongol boards galloping from horizon to horizon (which they would have, the Turks via the Ottomans being ultimately descended from a Mongol tribe). 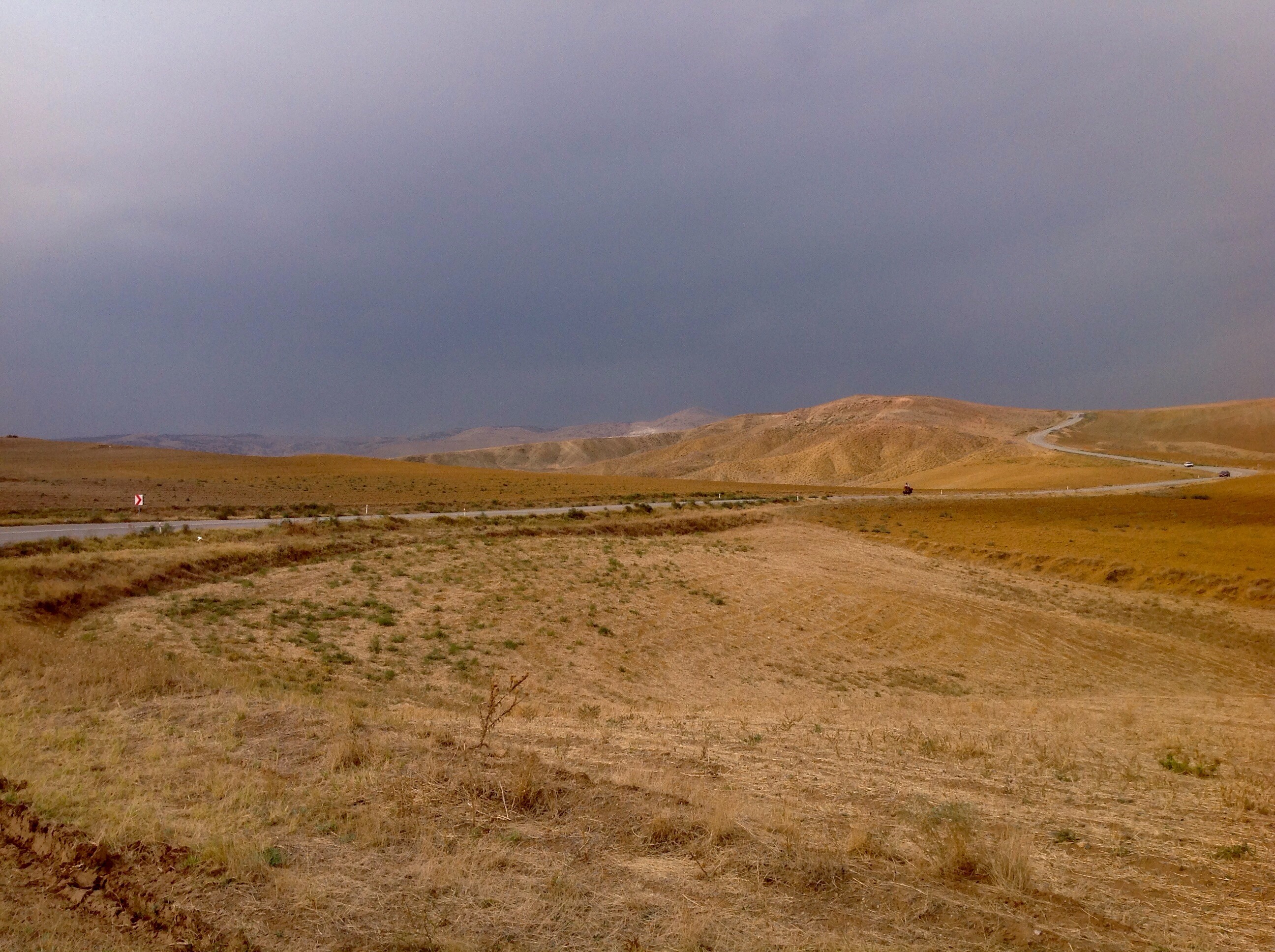 note the dark clouds closing in

We soon came into the town of Kesikköprü, a nice little place built on the only bridge that crossed the river. Around this time of day we usually pick up some bread for breakfast in the morning but every shop in the place (three of them!) was sold out. One of the shopkeepers asked us where we were going tonight, we named the next town and he was clearly unimpressed. “Why?” was his only response.

the river town of Keiskköprü

So we left the town breadless and crossed the river to continue on. The road turned from sealed Tarmac to sandy gravel and the small villages we passed through were more shack than house bit everybody smiled and waved, especially the kids who were always excited to see two bozos on bikes riding through there village.
We were quite high up now and there were few trees or bushes. There had been dark clouds on the horizon all day,and we had been fortunate enough to stay out of them but with darkness closing in it was time to find somewhere somewhat sheltered to camp for when they arrived as they were surely blowing our way. We found a stand of trees growing by an irrigation ditch just off the road.
We wheeled over and started setting up the tarp as the wind began to blow stronger. At one point we noticed a shepherd watching us from a hill with his flock around him. He came down to say hi, a friendly chap and helpful too, he told us (gestured, mostly) that there was a house a ways away if we followed the drainage ditch uphill. We were pretty much set up now so we decided to stay, but it was good to know that the option was there as the wind was blowing stronger and stronger.
Once the rain arrived though the wind eased off and the rain was quite light but persistent throughout the night.

I forgot to take the photo while camp was still up, but look at how effective the tarp is