Long ride today into the capital of Turkey but a fun one with some new characters. It was a bit sad to leave our spectacular campsite behind but we had miles to go and couldn’t hand around too much. The spectacular scenery around Sariyar Baraji dissipated quickly and it was back into the rolling sandstone hills – still lovely, but not on the same scale. 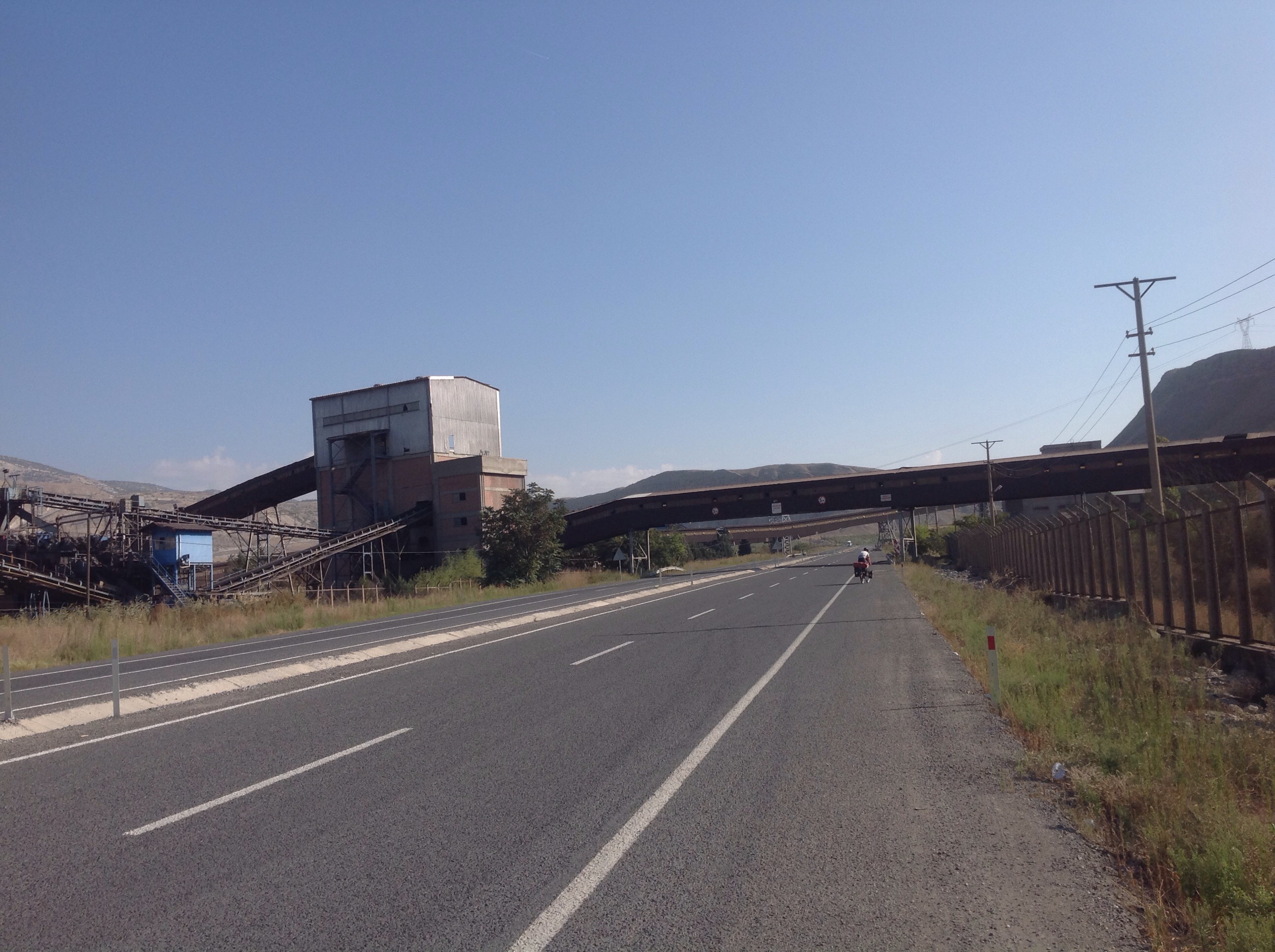 things were getting a bit more industrial

I was having some problems with my seat post and at one point fell behind Finn when I stopped to fix it. I was there fiddling with it for about 20 minutes on the side of the road and I knew I still had to catch up to Finn, so was feeling kind of down when at the same moment that I fixed the saddle a pick up truck pulled over and a smiley guy got out and offered me a lift. Pretty serendipitous, I was chuffed I could now easily get back to Finn (and got to skip out some hills along the way).
The guy who offered the lift was called Sülumayne. Him and his friend Ibrahim shared the back seat with me while two other guy rode up front. We caught up to Finn easily enough, and then they offered to drive us to the next town over called Beypazari. We had a lot of distance to cover today so of course we agreed, we were happy for the shortcut.
They dropped us off in the centre of Beypazari which, as it turned out, was quite big. We went for a look around and soon found that Beypazari was a really pretty town with small market stalls along cobbled streets and, bizarrely, a load of buildings most of them hotels that looked almost Germanic or Austrian, like and alpine lodge.

market stalls along the streets 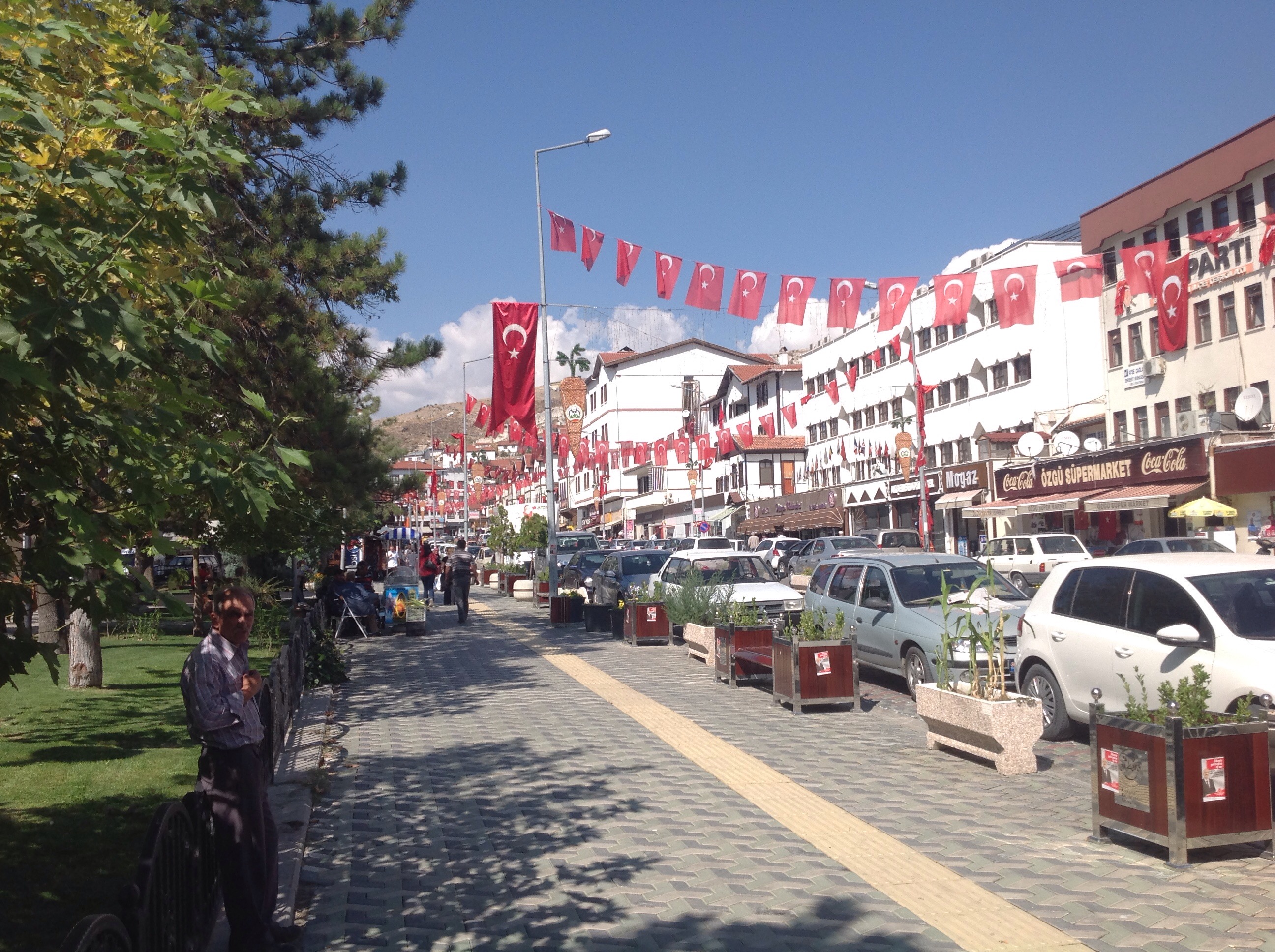 After poking around Beypazari for a while we decided it was time to make tracks, we still had around 90km to cycle. We rode out along the road which was getting busier the closer we got to the capital. At one point we turned a corner and one of the fruit and veg by the road, a rotund, moustachioed Turk, started waving a slice of melon and us and beckoned us over. 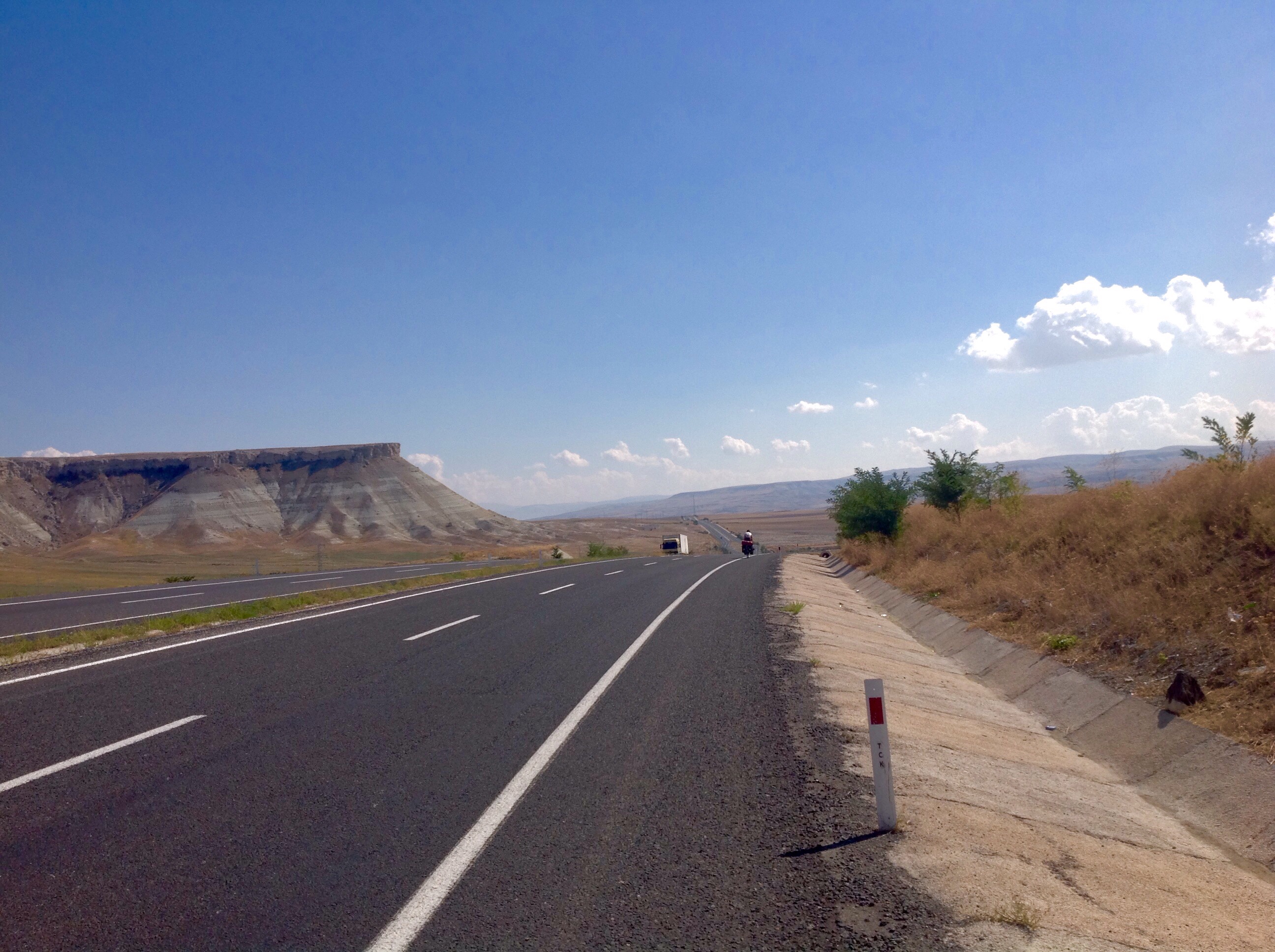 the melon man was waiting around the next corner

He was a hilarious guy, we couldn’t communicate at all but he cut big slices off a fresh melon and gave them to us, shouting and chucking all the while. When we were done he would solemnly take the rinds from us and then fling them into a field by the road with a big grin. He was hilarious and this pit stop gave us a much needed boost.
Much needed because not long after was the last big climb before Ankara, but it was a long drawn out one and the sun had gotten quite hot. We took a pit stop in a petrol station halfway up, got some water as we had run out and some food. We then resumed the climb. When we got to the top at last we saw Ankara spread out before us, but there was still a lot of cycling to do before we reached our destination, our host Ahmets place.

you can see where the road beigns to rise, the start of the climb

and where it begins to fall, the end of the climb

Riding into Ankara was a bit like riding into Istanbul, but not quite as busy. It got dark while we were trying to find our way to Ahmets place, the roads were busy and hilly. Ahmet lived a bit outside the centre in a nice neighbourhood and he had a ground floor apartment! What a treat, to not have to lug all our bikes and luggage upstairs at the end of a long (130km) ride.