We woke to find that we had pulled off a lot closer to the road than we thought, and the bush that had seemed so big that we sheltered behind was half the size in the light of day. We got dressed quickly as cars whizzed passed us under a thankfully clear sky.

In the morning we followed the road along a beautiful stretch of coast, all rocky bays and inlets. The road wound around the creases in the coast and the clear turquoise Adriatic looked extremely inviting. This continued for fifty-odd kilometres until we cut inland for a short while.

After our brief overland excursion we arrived at the back of another inlet. The last few kilometres to getting back to shore had been a bit difficult as the inlet and the mountains functioned as a funnel for the wind which blew in off the sea and was concentrated on the road we were travelling. 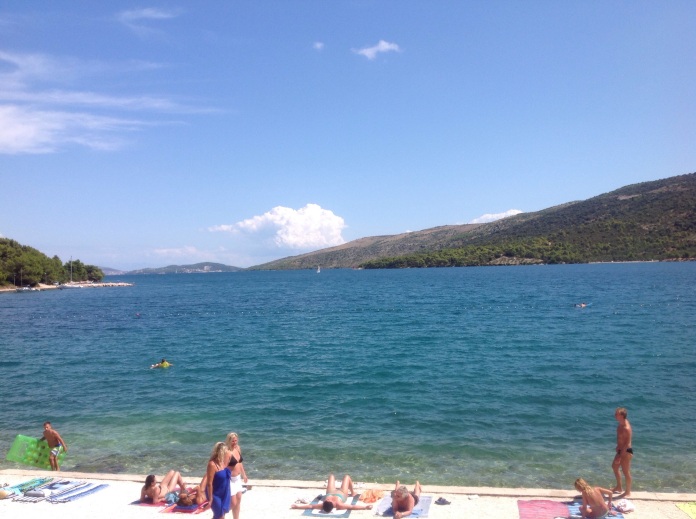 Inlet where we had lunch

After lunch at the inlet we started on the last leg to Split. It had gotten quite warm in the afternoon and instead of waiting it out like we normally would we pushed on through. There was a big climb out of the inlet that tuckered us out, but from there it was a long descent and then flat almost into Split.

The last few kilometres before Split was on a busy three lane road that oftentimes narrowed to one as road workers were frequent but dispersed. This made the riding, especially in this dusty heat, pretty unenjoyable.

When we finally arrived at the centre of Split, the magnificent ancient site of Diocletian’s Palace we were wrecked. Tired, dusty and sweaty we wheeled our bikes though the narrow streets crowded with tourists trying to find the accommodation Caroline (Finns mum) had booked us.

Well, Caroline had done a great job (Thanks Caroline!) the place was right in the centre of the palace ruins. We got the room key and were greeted with the refreshing blast of an air conditioner and – what a treat – two comfy beds and a shower. After getting clean for the first time in a week we collapsed on the beds for a long nap.

The view from our room – very well located!